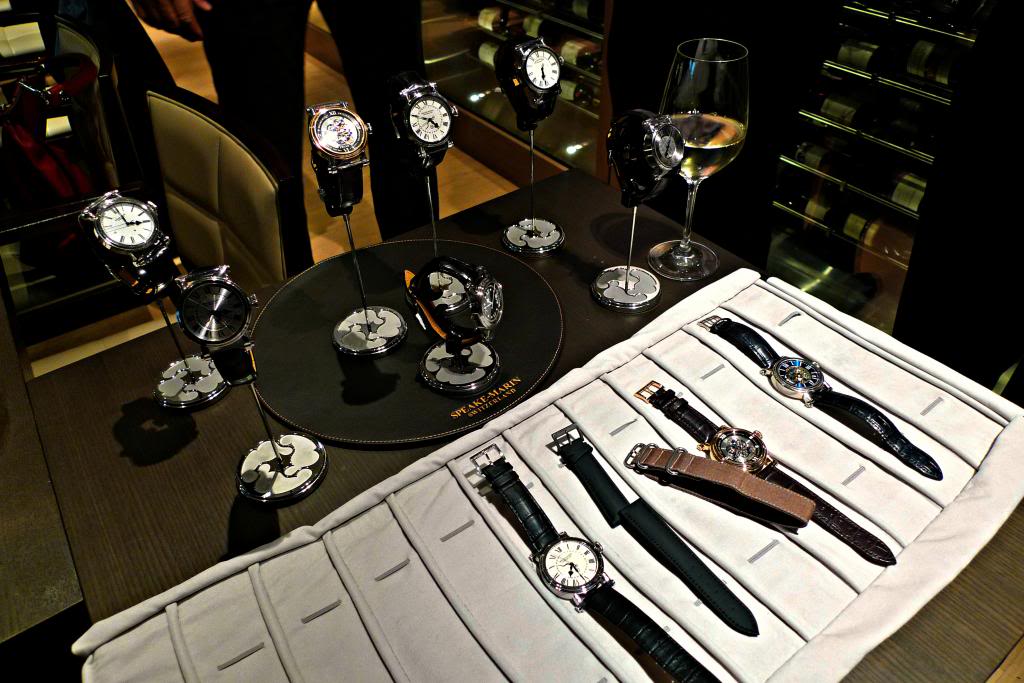 Earlier this year I caught up with Peter Speake-Marin at the Geneva Time Exhibition and saw some models from his current collection that I had not yet had the opportunity to see. These pieces and more, including the Triad which was released this year, recently made their way to Perth, Melbourne and Sydney as part of a regional tour by Dariush Djavahri, Peter Speake-Marin’s Area Commercial Manager for Asia and the Middle East and Josh Reed, their Australian agent, who flew in from Perth for the event. 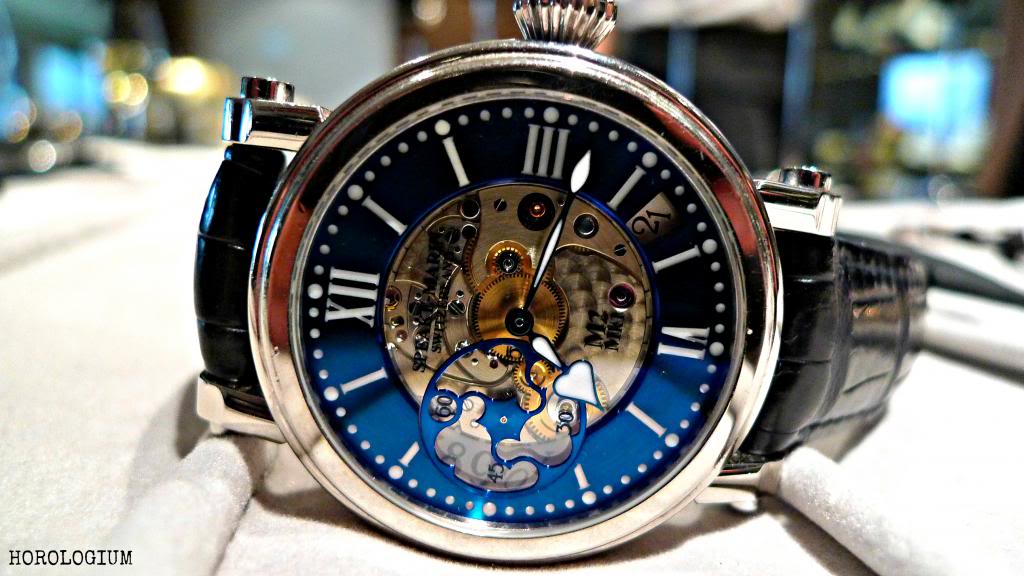 In attendance were four local Peter Speake-Marin owners and, by the end of the evening, perhaps two future ones…?

Sydney has never seen a more complete collection of Peter Speake-Marin watches in one place than there was on that night. What this meant was that it was possible not only for people to see and ask questions about a wide range of models at all price points, but that the all important ‘in the metal’ experience was possible for everything from the Resilience to Serpents to the Spirit MkII, the Triad and more. 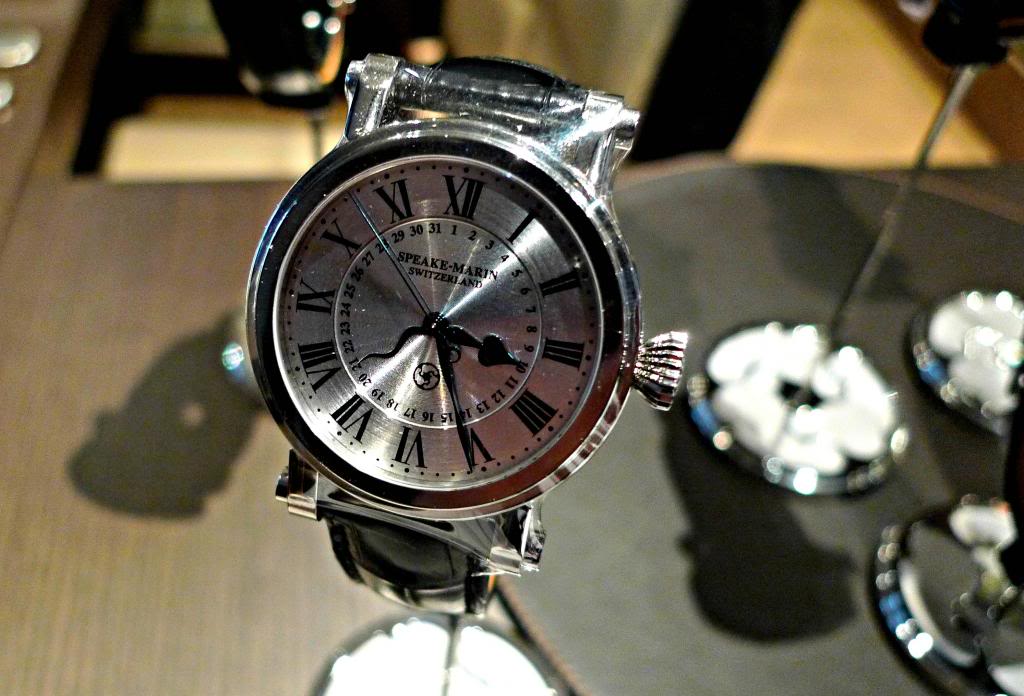 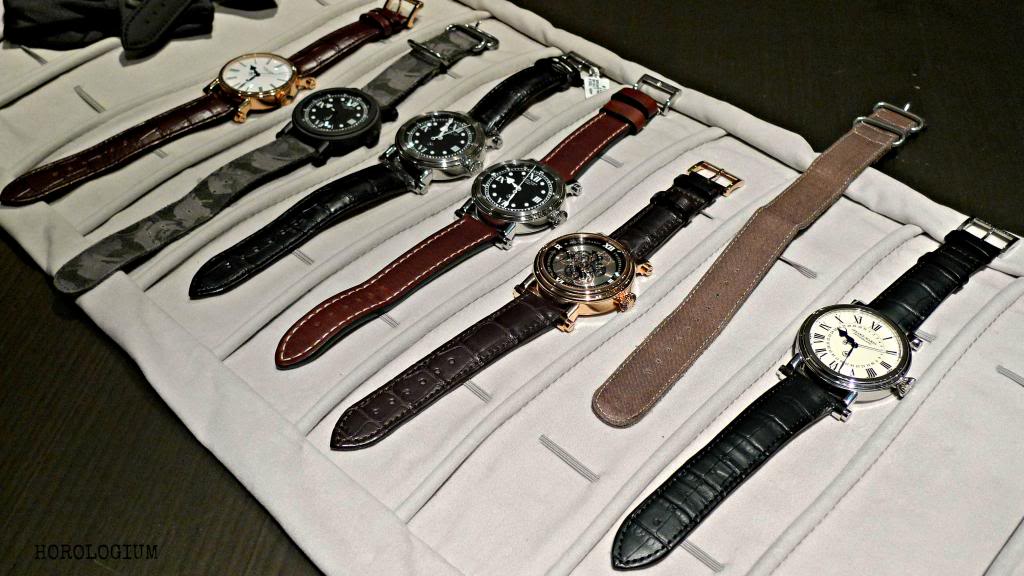 Having seen some of the models (see my link above for my thoughts on them), for me the two models I was interested in looking at were the Spirit Mk II DLC and the Triad. When each of these was released, I felt a bit uncertain about my response to them, particularly the Triad. The Spirit Mk II had me pondering at the time because of the use of DLC, which seemed so at odds with Peter Speake-Marin’s much more cleanly dress watch oriented horological past. I had heard that it was the most popular watch at the Melbourne dinner two evenings before, so I was curious to see what the Sydney guests would make of it. 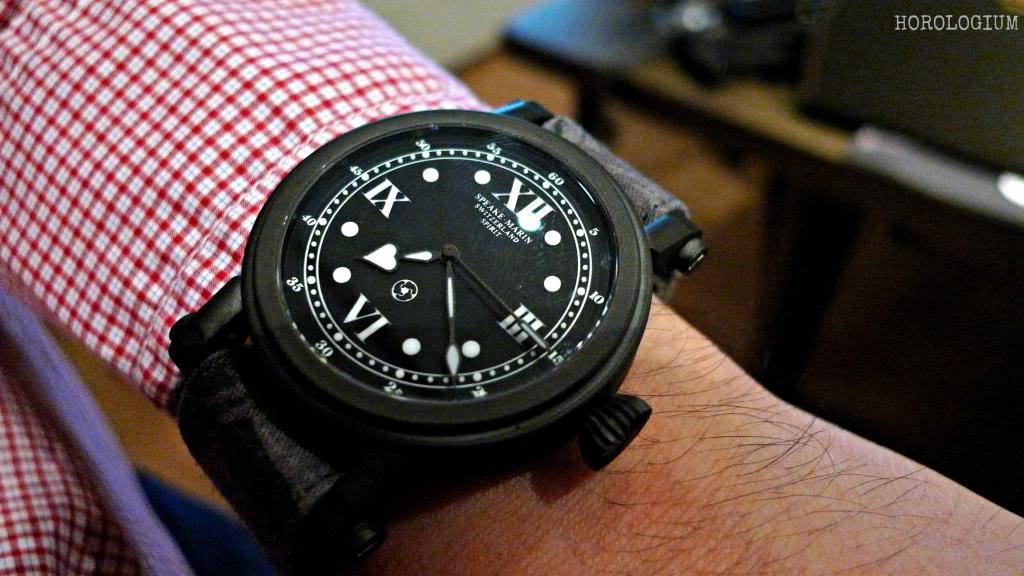 The first thing to note about the DLC model is that there is a very different feel to it ‘in the metal’ than in photos. Although very much a sporty watch, it is more muted in impact, less a case of a model simply being DLCd. At 42mm and not too thick or weighty, it feels very comfortable on the wrist and was an unexpected drawcard for some of the guests. There was pretty much a consensus, with which I concurred, that it worked better than we thought it would based on the photos we had seen. A pleasant surprise. Plus the lume basically rocked. If I’ve said it once I’ve said it too many times – where possible, see, handle and try as many watches as possible. What appeals in photos may not turn out that way when you handle it, and vice versa.

The Spirit Mk II DLC’s dial is a single piece, with the use of Super-LumiNova for the excellent lume. Because the numbers and markers are large, when lit up the contrast with the matte black dial is impressive. The dial itself is made by creating a three dimensional (negative) mould of the dial (including the hour/ minute markers, railroad chapter ring, PSM logo and topping-tool and text) which is then filled with lacquer and Super-LumiNova. After this mould is set it is then bonded on a dial plate.

As mentioned in the earlier post, the Spirits are the entry points to the Peter Speake-Marin brand, models that were, in some ways, the result of consumer demand. You get all the very distinctive hallmarks of the Speake-Marin watch such as the case, lugs etc at a lower price point. However, the lower cost naturally means that something had to be changed – the movement. Whether or not this is of importance is obviously up to the individual owner and their focus when it comes to watches. In the case of the Spirit Mark II DLC, the movement is instead the Technotime TT738 with a five day power reserve. 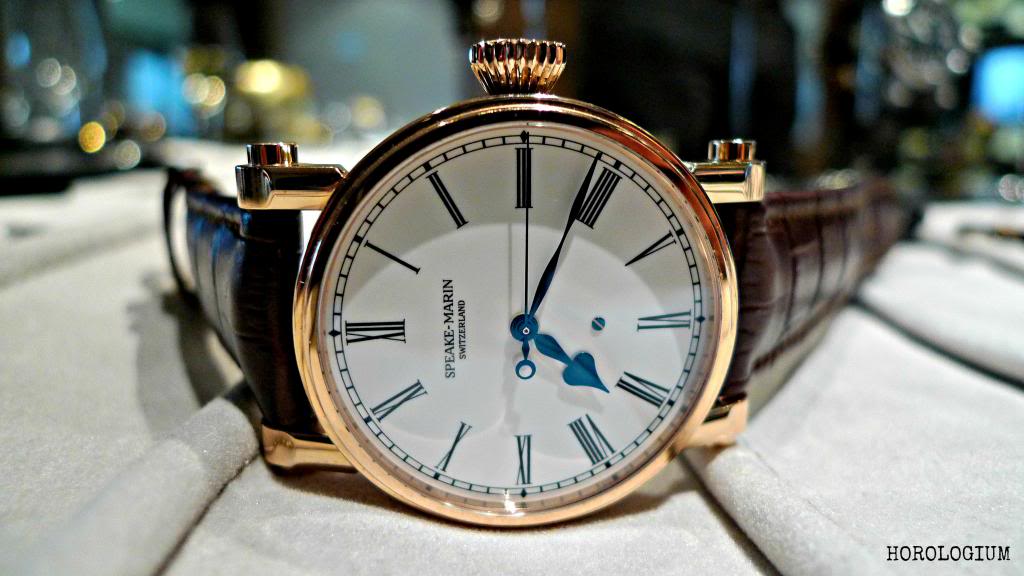 Perhaps the most classically Speake-Marin piece there that evening, and my favourite of the night, was the enamel dialled Resilience. It’s pure Peter Speake-Marin, with gorgeous enamel dial and, on this night, including the very dressy rose gold version. This is the sort of watch that doesn’t date, and is pretty much guaranteed to be a crowd pleaser. 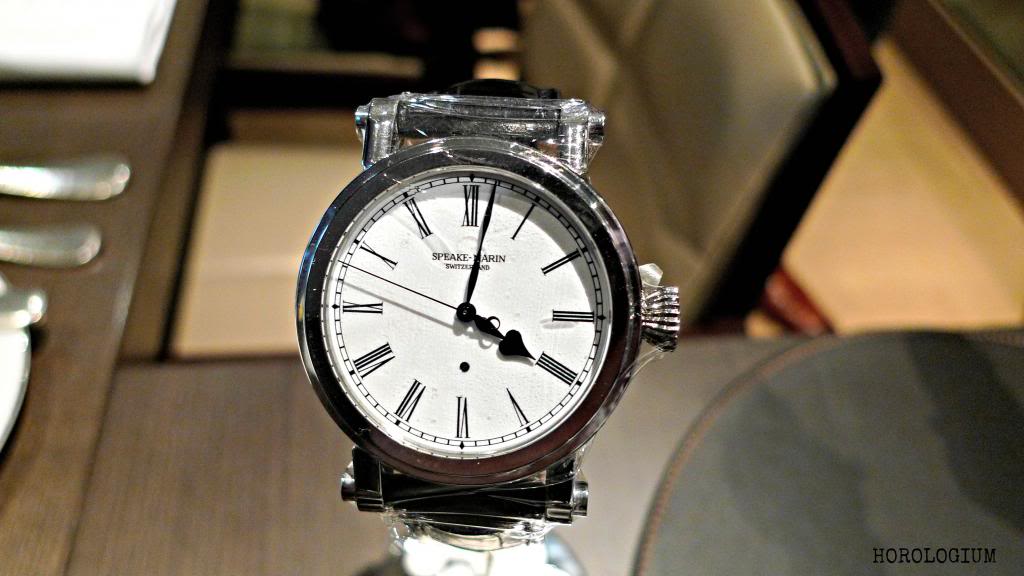 Onto the second piece I was curious to examine for the first time – the Triad. In his words, the philosophy of this watch is described thus – “Once might be lucky, twice a coincidence, but three times is a pattern. Three is a number heavy with symbolism and meaning; three encompasses beginning, middle and end; birth, life, and death; past, present and future.” 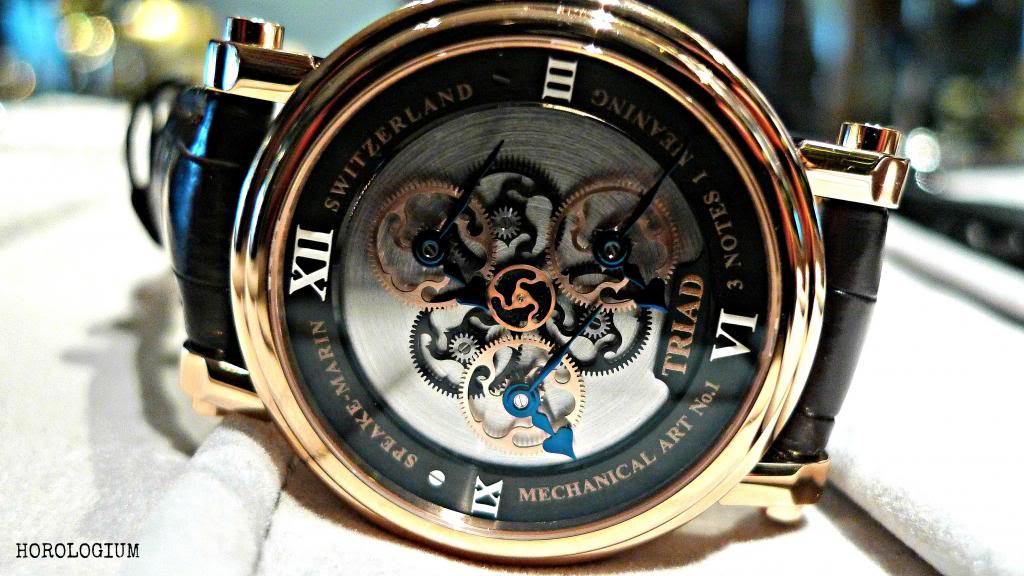 This is the first piece in a new Mechanical Art collection, the eponymous ‘triad’ referring to three time indications on the open worked dial, each with their classic Foundation hands over the topping tool shaped wheels, and forming a triangle.

On the bottom right of the dial ring is the text “3 NOTES 1 MEANING”. Again in Peter Speake-Marin’s own words, this is described as follows – “In music, a Triad is a three-note chord. Three notes played simultaneously to provide a single sound rich in emotion, depth and meaning and this is exemplified by ‘3 NOTES 1 MEANING'”. The Triad contains what is known as the EROS 2 movement and comes in a limited edition of 88 in stainless steel or with an 18K red gold bezel in a 42mm sized case.

In seeing the Triad for the first time, I admire the workmanship in it, but as a watch to wear, I remain a Speake-Marin traditionalist, with my preferences tending towards serpent hands, the HMS and Resilience. 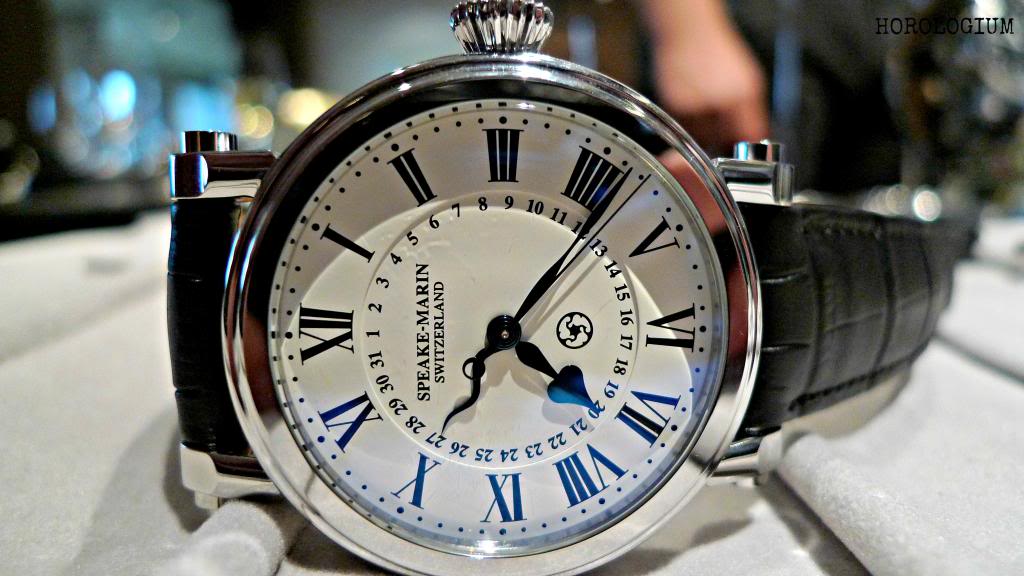 My thanks to Dariush and Josh for a very enjoyable evening filled with watches from one of my favourite brands, and to the Hyatt for the excellent service and food.

You probably noticed an unusual strap amongst all the leather. It is a brand that, coincidentally, came to my notice just a few weeks before this evening – Suigeneric NYC. They are a young brand offering hand waxed cotton straps who have, as you can see, engaged in a collaboration with Peter Speake-Marin.