Clear blue skies, a blindingly bright sun and temperatures hovering around 20C. Sydney during what was, even for this city, an incredibly warm August, played host to the annual Sydney International Boat Show at Darling Harbour, but it was not just about boats.

On the Starship Sydney, large enough to operate as a mini floating car park for Maseratis (the choice of the day), Parmigiani Area Manager Mr. Theodore Panos and The Hour Glass held an exhibit featuring a number of pieces, some of which had not been previously seen in Australia.

This was one of them. 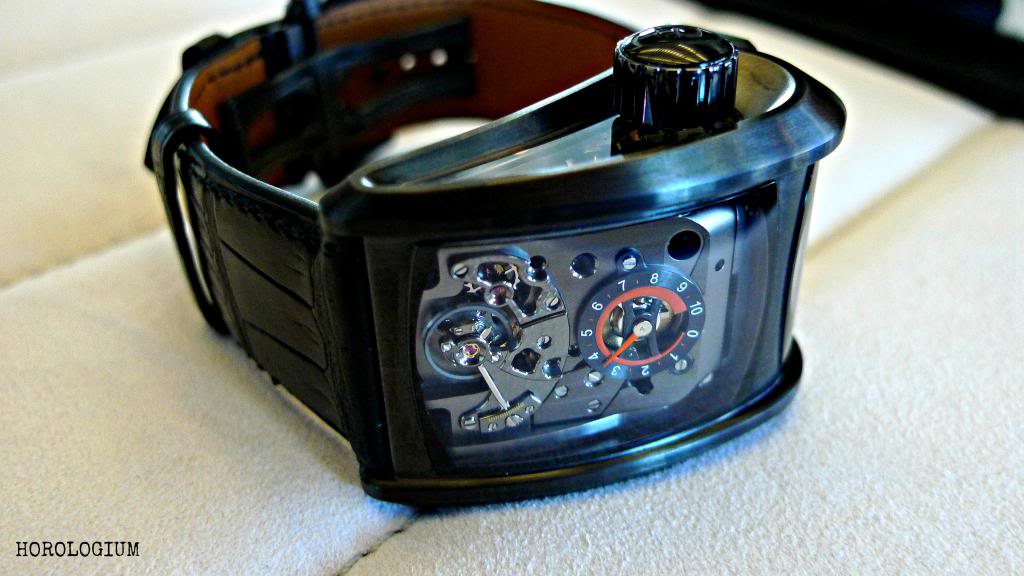 As a part of Parmigiani’s partnership with The Hour Glass, its exclusive retailer in Australia, a new version of the Parmigiani Bugatti Super Sport with an ADLC (amorphous diamond-like carbon) coated case has been created in a limited edition of just ten pieces. 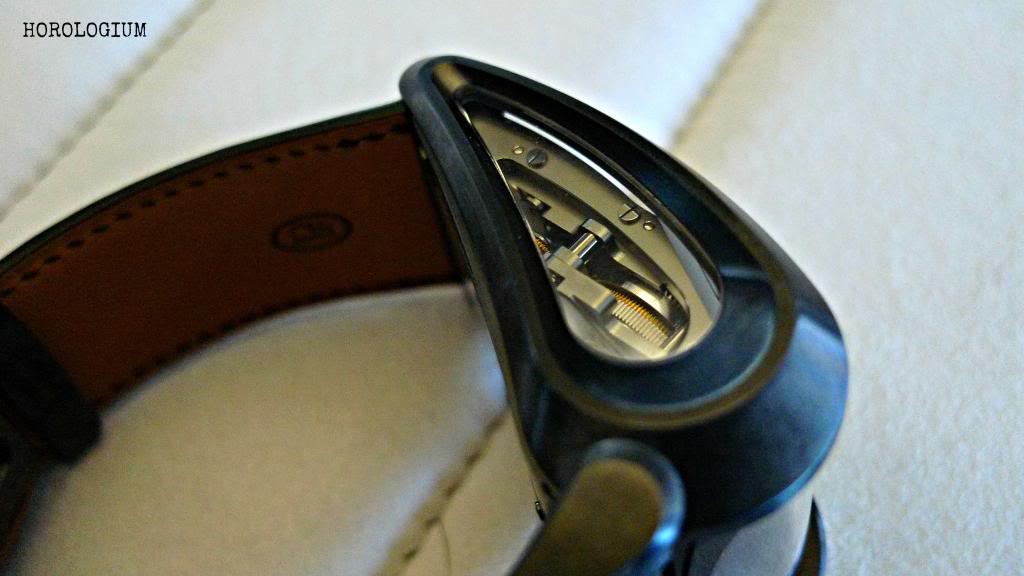 In a rather large 50.7 x 36 mm case reflecting both the wing of the Bugatti Veyron after which it was inspired and the teardrop shape of the Parmigiani lugs, the original model was released in 2010 in honour of the Veyron. 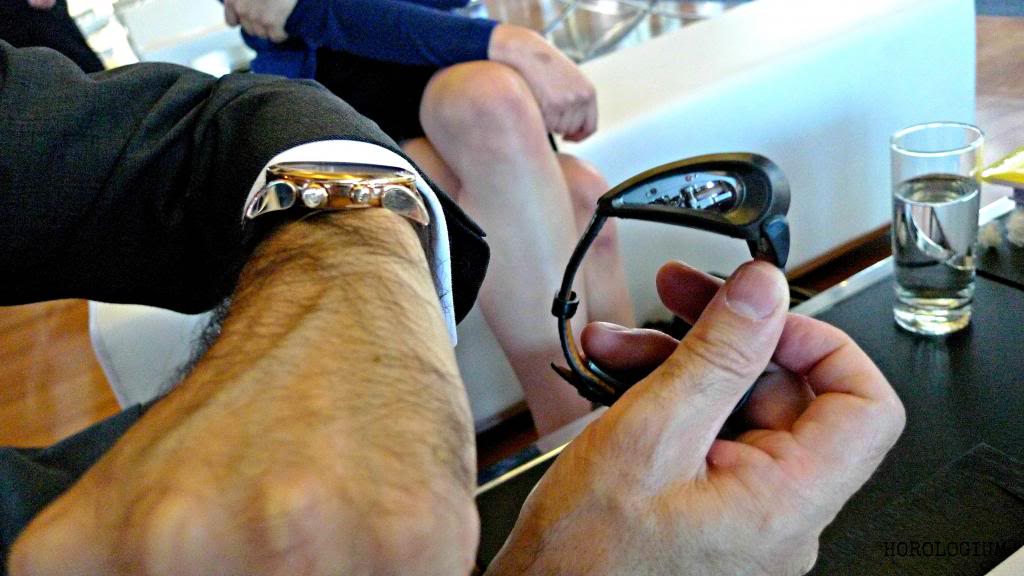 The Hour Glass’ limited edition model is darker and sportier due to the use of ADLC-coated 18ct white gold case. The regular model is just white gold. The Bugatti Super Sport Hour Glass edition is a darker, sportier version than the original, and the Hermés alligator leather strap’s buckle is in titanium. 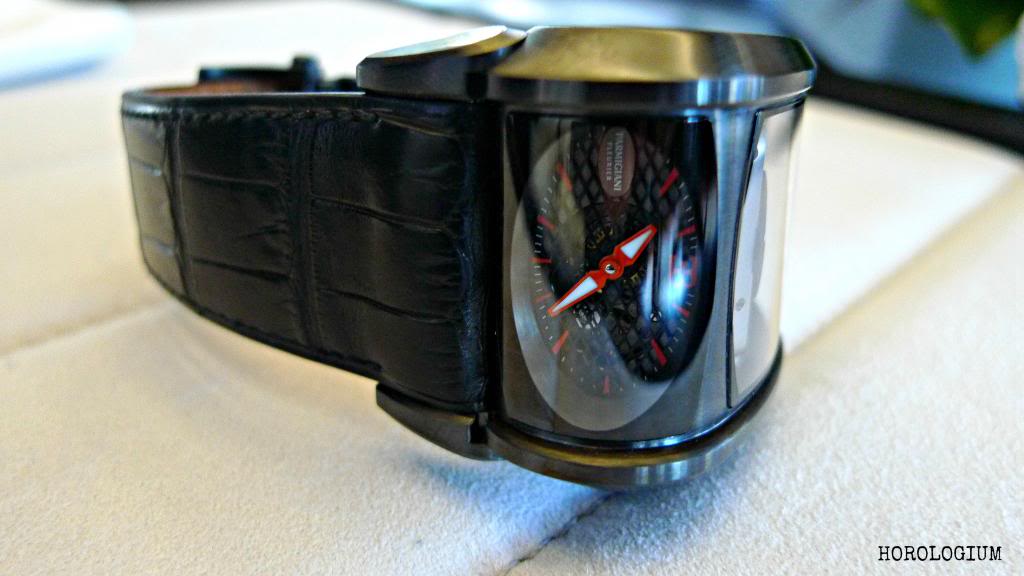 In addition to the coated case, the dial also differs from the normal version. It has been redesigned to resemble a Bugatti’s radiator grille, with polished and satin-finished appliqué markers, indices, and lumed delta-shaped hands.

The Super Sport has a dial setting wheel which is at a 90° angle to the movement spindle, allowing for a perpendicular time display. Another notable feature is the ‘dynamometric’ crown. Instead of pulling it out to set the time, it is pushed inwards to pop the crown out. For this limited edition model, the crown is topped with a black obsidian stone to match the case colour. 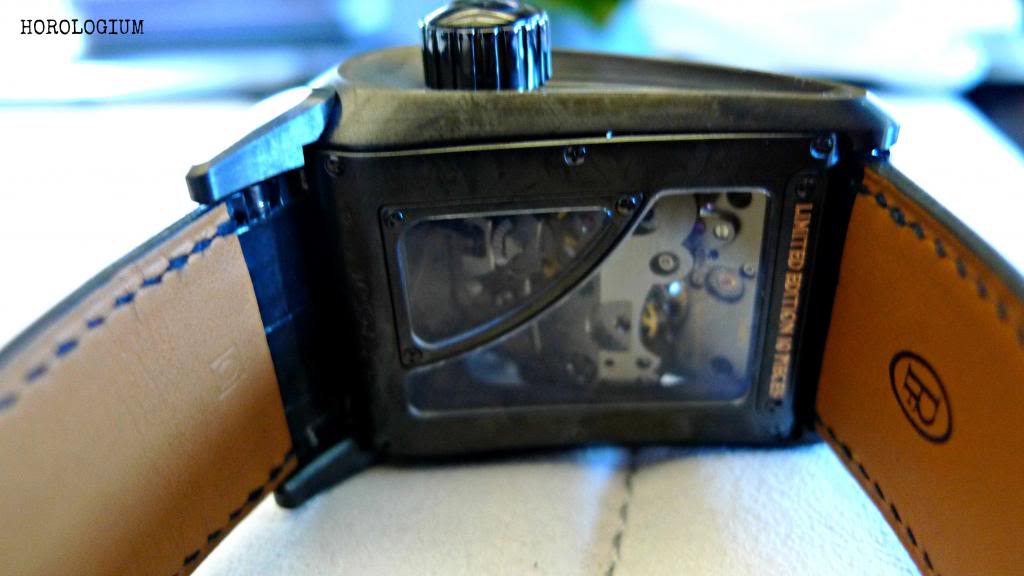 There are six anti-reflective sapphire crystals on the exterior, through which you can see the 333 piece manual wind PF 372 movement with a power reserve (shown via an indicator) of ten days. It has ‘gold black’ rhodium and rose gold plates and bridges. With a height of 15.96mm, width of 25mm, and length of 37.01mm, you can understand the size of the watch. However, although a large and chunky piece, the curvature and shape make its bulk interesting and not uncomfortable to wear.

The Parmigiani Bugatti Super Sport – The Hour Glass is in a limited edition of ten pieces and available from THG boutiques.