In 2012, after a period of flux and uncertainty about the brand’s image, JEANRICHARD repositioned themselves and launched a new identity with a streamlined triumvirate range based on ‘land, water and air’ in the form of the 1681, Terrascope, Aquascope, and Aeroscope collections.

The younger sibling of Girard-Perregaux, JEANRICHARD has seemed to occasionally struggle for being this, but a rebirth has meant that the brand is not only quite different but also quite distinct, as opposed to the prior status of occasionally either almost replicating or having strong hints of Girard-Perregaux in many of its designs.

The JEANRICHARD of now is split into ‘Manufacture’ models with the in-house JR1000 calibre (1681 collection) and the others at a lower price point using ETA or Sellita movements (Aeroscope, Aquascope, Terrascope). The 1681 is the more classic collection and the others, as the names indicate, more casual and sporty.

I recently had the opportunity to look at some of the models from their new collections. Unfortunately there were no 1681 Ronde models on the day but in this, the first of two posts about some of the JEANRICHARD pieces (I will split the sports from the dress watches), we look at a 1681.

Named after the year in which Daniel Jeanrichard created his first watch, the 1681 collection falls into two categories, those with a round case called the ‘1681 Ronde’ and those with a cushion case, which fall under the general ‘1681’ collection. 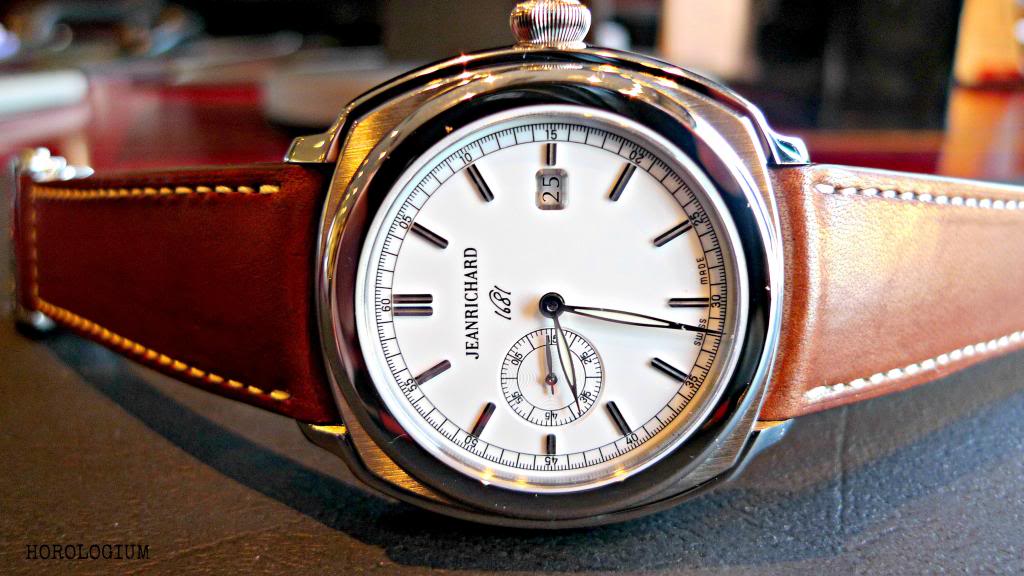 As part of the dress watch range, it is available in pink gold, stainless steel, and bi-metal. The dials aren’t uniform throughout the range; there is a split between those with laquered (white or black) dials such as the one in this post, and those with rhodium satin-finished sunburst-effect dial. The range also includes the use of both Arabic numerals and hour indices and either a sweep seconds or seconds sub-dial at 9 o’clock. All bases are covered.

For those who like the pink gold and blue hands combination, there’s a model with a white lacquered dial, applied pink gold-plated Arabic numerals and indexes and blued-steel luminescent hands.

This model is one of the more classic combinations available, in stainless steel with a white lacquered dial, applied indexes and Arabic numerals, luminescent hour markers and hands. It comes on either brown or cognac calfskin or a cognac ostrich strap with a stainless steel folding buckle. This example is the brown. 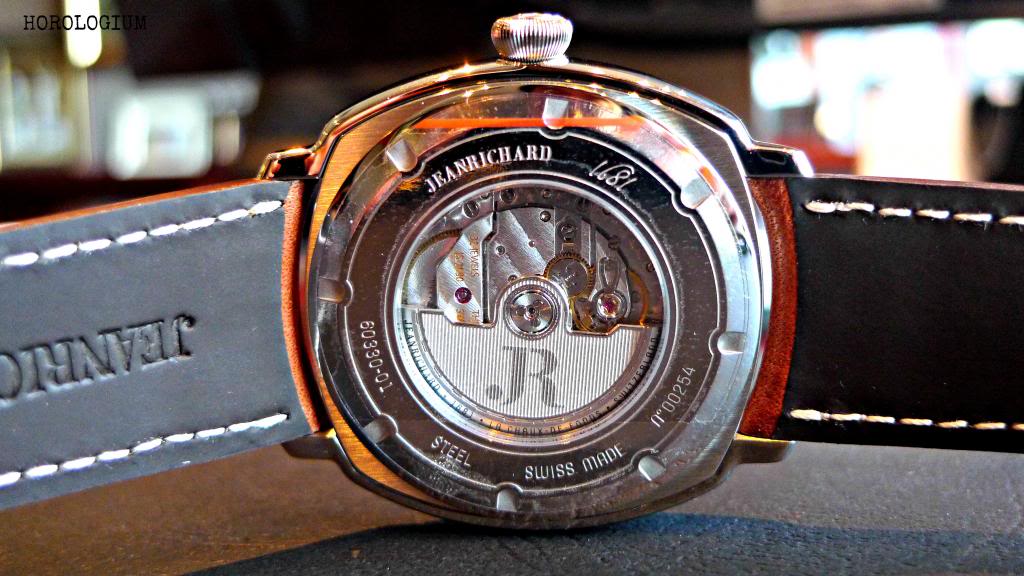 Inside is the automatic Calibre JR1090 movement which has a 28,800 VPH and a power reserve of 48 hours. It has an anti-reflective sapphire crystal, open case back and is water-resistant to 100m.

As you can see, it is a reasonably large cushion case. The lugs are short and sit closely to the case. It sits comfortably but perhaps is less suited to those with small wrists because of the case/ lug design. The onion-style crown is a nice retro nod and of a big enough size for easy use.