Home › Watch shows › Baselworld 2013 › HANDS-ON : Omega’s Speedy goes to the dark side of the moon

HANDS-ON : Omega’s Speedy goes to the dark side of the moon

The Bullhead was one of Baselworld 2013’s most talked about releases from Omega and, in the run up to its appearance at boutiques and retailers, is still a hot topic of horological conversation. Running perhaps in a dead heat in the ‘Omega watch chatter’ stakes is the new all-black Speedmaster.

The 44.25mm sized Omega Speedmaster “Dark Side of the Moon” derives its name from its black zirconium oxide ceramic dial and matching black ceramic case, the first time this material has been used for the ‘Speedy’. In fact the watch is nearly all ceramic – the case, bezel, chronograph pushers, crown, dial, and even the buckle.

When first launched, Omega’s iconic Speedmaster utilised a tri-compax dial format. The bi-compax layout used in this new model was first used on the Speedmaster Co-Axial Chronograph, the first Speedmaster to contain Omega’s in-house chronograph Co-axial Calibre 9300 movement. As per that model, the sub dial at 3 o’clock for this new model is both 12-hour and 60-minute counters. The small seconds sub dial is at 9 o’clock and the date is a window at 6 o’clock, where the elapsed-hours sub dial previously resided. 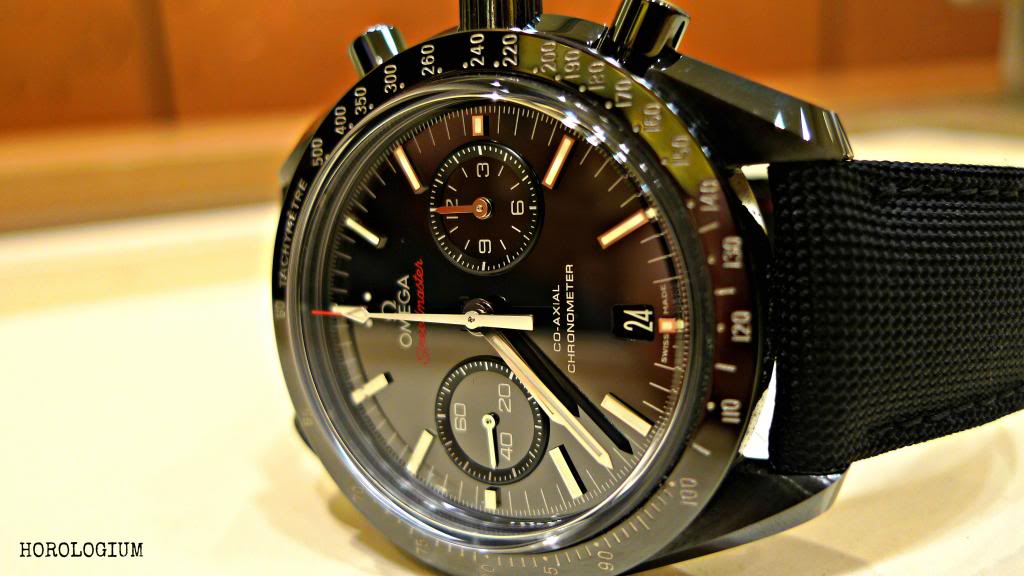 As mentioned, the bezel is polished black ceramic. It features the Speedmaster’s familiar tachymeter scale, but this time in matte chromium nitride. 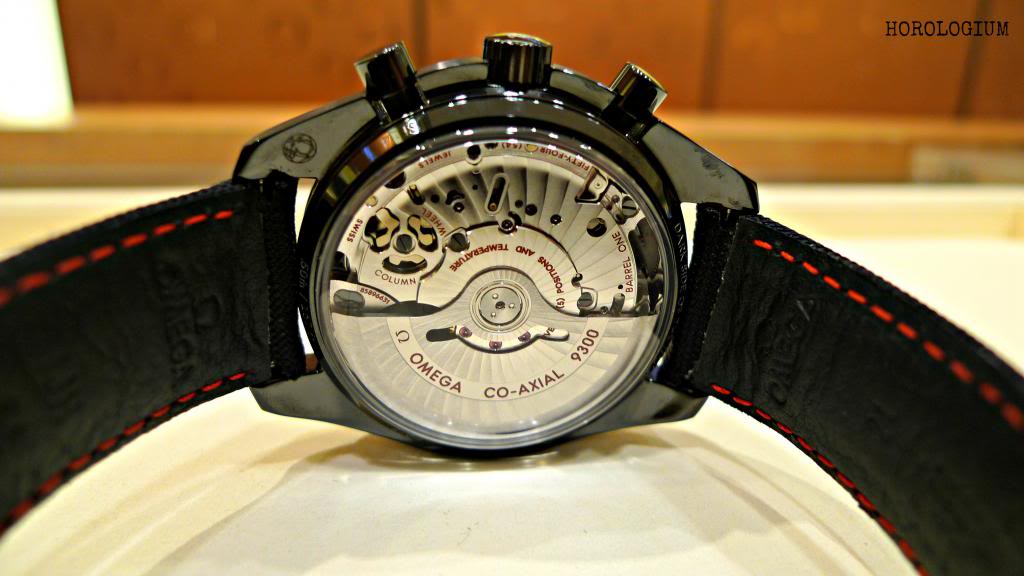 Omega’s Caliber 9300, visible through the case back, is COSC certified as a chronometer and has a 60-hour power reserve. A handy thing about the movement is that it means that there is an independently adjustable hour hand, although there is no quick set date.

The words, “Dark Side of the Moon” are engraved in matte chromium nitride above the caseback crystal (between the lugs on the right hand side in the photo above). Naturally, an all-black watch has to come with an all-black strap. In this instance, a sporty durable black Cordura® fabric strap with a black ceramic buckle.

It has the core elements of the classic Speedmaster Professional but looks really quite different. The ceramic dial is a deep, glossy black and the case and polished bezel in particular, were more shiny than I had expected. Not overly so, but noticeable. I mention this only because when it comes to ‘all-black’ watches, there often seem to be some quite strong ‘matte’ vs ‘shiny’ views expressed.

To wear it is quite light due to the use of ceramic, and I like the choice of a Cordura fabric strap. It’s sporty, casual, and suits the overall look of the Dark Side. 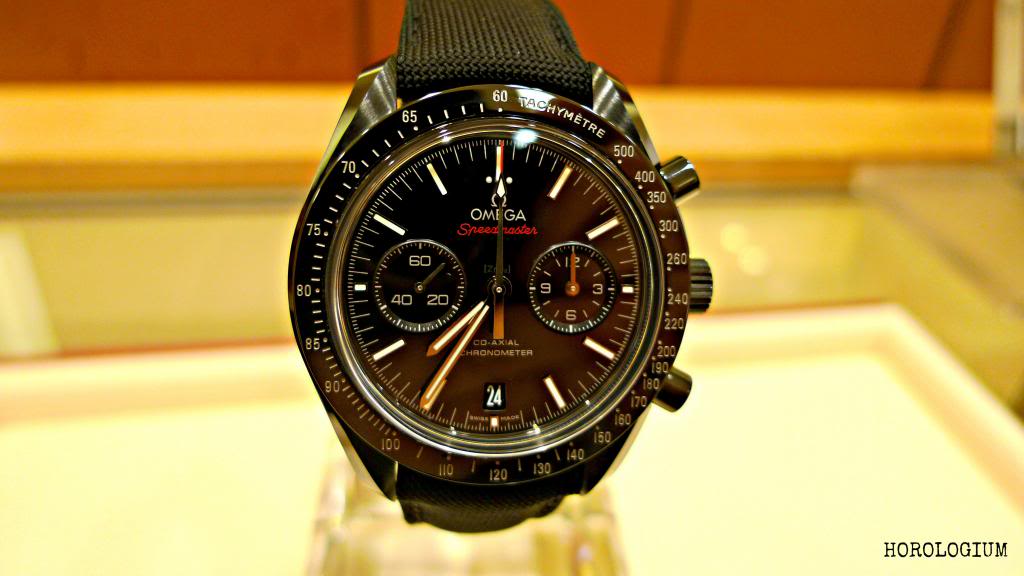 Is it a worthy addition to the Speedmaster range? Well it has a catchy and appropriate name and so far, the response has been positive even by many long time Speedmaster enthusiasts.

The “Dark Side of the Moon” has one notable advantage over the seemingly endless supply of ‘all-black’ watches. As a Speedmaster, a design which has managed to maintain a remarkable longevity even in its many iterations, it has a greater chance of managing to stay fresh and not look like a part of the ‘all-black’ fad that has been going on for a surprising number of years now. 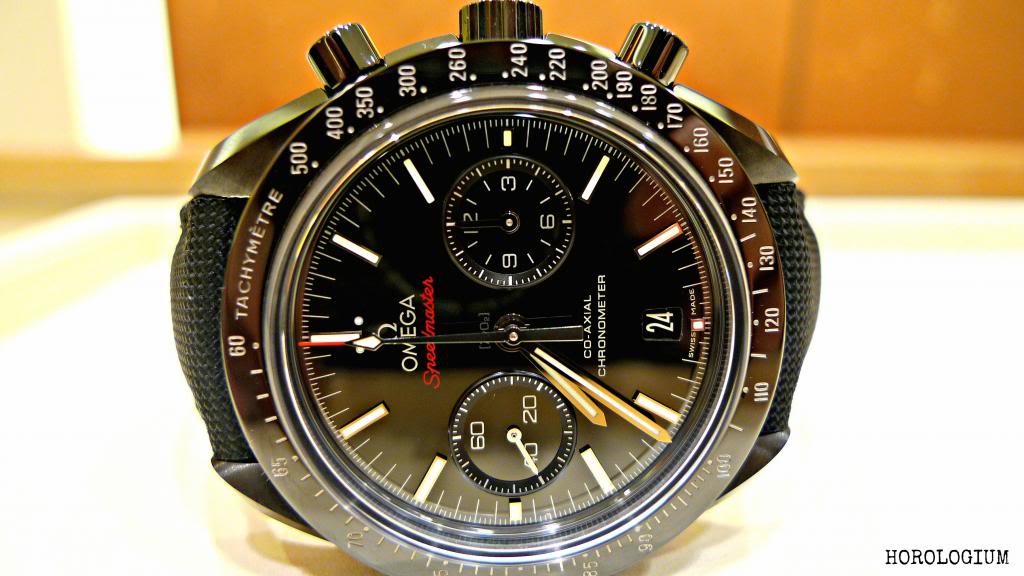 There have been a lot of Speedmaster models. This is one that for me, works because it is faithful to the core design but modern, and for those who have wanted a Speedy but never quite managed to decide on which one, the ‘Dark Side of the Moon’ is different enough that it might just be the one for you.