At Baselworld last year Hublot presented the groundbreaking ‘Tribute to the Antikythera Mechanism’ movement,  reproducing the mechanism in miniature to wristwatch dimensions and adding to it hours, minutes and a tourbillon. This year during Baselworld 2013 they proved that 2012 was not a one-off by creating a simplified version of the Antikythera, the ‘MP-8 SunMoon’. Like its predecessor, Hublot’s SunMoon is a limited edition model, but of twenty pieces instead of the four Antikythera watches Hublot produced last year. The first Antikythera piece had fourteen functions, the new SunMoon has a mere seven.

Going back a step, what is known as the Antikythera Mechanism was recovered between 1900 -1901 from a shipwreck near the island of Antikythera during a sponge dive. A device designed to calculate astronomical positions and the oldest known complex gear mechanism, it was in 82 fragments when found. Research revealed that it dated from the 2nd century BC and was ordered by a wealthy Roman gentleman; many other items intended for him were also found in the wreck.

As mentioned above, Hublot’s 2012 recreation of a working ‘Tribute to the Antikythera Mechanism’ was restricted to four pieces; one of which is now a part of the Archaeological Museum of Athens’ Antikythera wreck collection. A second piece has remained with Hublot, a third has been touring on display, and a fourth was allocated for auction, the proceeds going to the Athens museum. 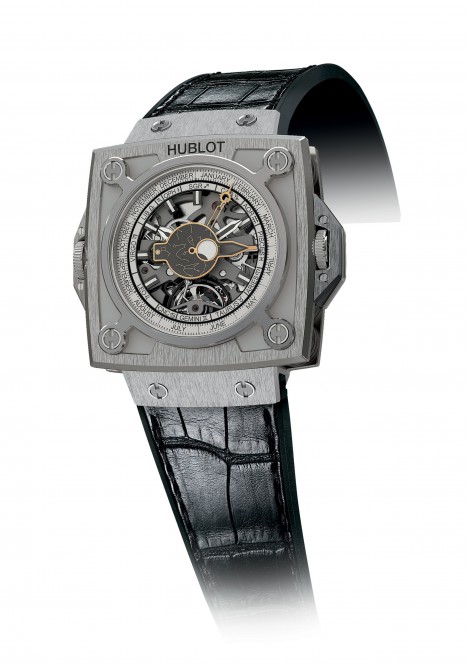 There was talk about these being the only Antikythera watches that would ever be made by Hublot, but 2013 has brought a new version with moon phase, solar and lunar calendars, flying touribllon and the sidereal positions of the sun and the moon, all shown on the dial. The 2012 ‘Tribute to the Antikythera Mechanism’ displayed the functions on both sides.

The SunMoon includes both a solar and a lunar calendar as well as an indication showing the sidereal time/ position.  I won’t try to explain how to read or operate this watch as I remain somewhat confused myself…If you want to fully understand its functionality, I’d recommend going to this page at Hublot’s website to read their explanation.

The square case of the SunMoon is made of microblasted titanium with both satin and polished finishing, the bezel fixed with four H-shaped titanium screws. Covered with anti-reflective sapphire crystal, it has an open-worked, multilayered dial. The hands are covered with black luminescent material, the sun and moon hands are gold-plated and satin-finished. Inside is a 21,600VPH hand-winding flying tourbillon movement that rotates once a minute to indicate seconds. It has a power reserve of 5 days.

How much will this piece of crazy horological achievement cost? I don’t know yet, but if you think it’s within your watch budget for this year, contact Hublot at info@hublot.ch .

If you want to learn more about the Antikythera Mechanism, here is a documentary.

To read more about the Antikythera Project at the museum, go to their website here.