Baselworld 2012 saw the launch of the Seiko Astron GPS Solar, an immensely popular watch about which I have written about before. The passing of a year brings us to Baselworld 2013 and six new models with 26 city names, on the bezel for greater legibility. Three of these models are in steel and the others in titanium, the latter with ceramic inserts in the bracelet which are colour matched to the bezel.

As well as these, there is also a special new limited edition called the Kintaro Hattori Limited Edition, commemorating Seiko’s 100th birthday and named after their founder. The first sign of this is the gold ‘TYO’ (Tokyo) on the ceramic bezel to mark Hattori’s birthplace. 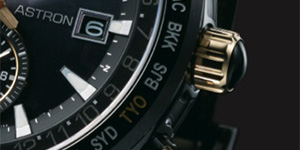 His motto that Seiko always be “one step ahead of the rest” is on the new watch’s caseback, and it seems fitting that the Astron GPS, a revolutionary watch that Seiko believes is a seminal point in their watchmaking history, was chosen for this anniversary. The caseback also features an engraved and embossed ‘S’, the first Seiko trademark.

The case of this new limited edition is titanium with black hard coating, its crown tipped with onyx, the crystal coated in Seiko’s proprietary anti-reflective finish. Although the watch case is titanium, it comes with both a titanium bracelet and crocodile strap. 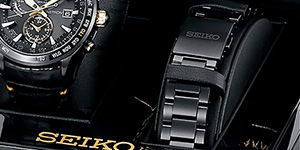 It will be available worldwide from September 2013 and is offered in a limited edition of 5,000 with a serial number engraved on each case back.

Given the immense popularity of the Astron GPS Solar since its launch, this new Kintaro Hattori LE will no doubt sell out like the first limited edition Astron GPS (Ref. SAST001) did. The RRP is 3,500 EUR.