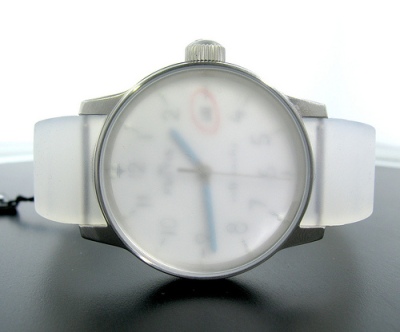 In 2008, German artist and designer Rolf Sachs designed the limited edition ‘IQ’watch for Fortis. This year, he has again collaborated with Fortis for another limited edition, this time to celebrate the brand’s 100th birthday.

Sachs’ inspiration behind the limited edition ‘Frisson’ stems from the image of a vodka glass freshly out of the freezer. The mineral crystal has a frosted over finish, giving it a ‘chilled’ look. This makes numerals difficult to read, but the bright blue hands make the time fairly legible, even through the frosted crystal.

What drew me to this watch was its interactivity. The application of a small amount of moisture (preferably water. The use of vodka, as per the design inspiration, is a decision for you) to the frosted crystal clears it, exposing the dial, though the period of clarity doesn’t seem to last for very long. The intention was to give the wearer an opportunity to actively engage with the watch.

At a comfortable 40mm, the Frisson’s white dial has Arabic numerals, a hand-drawn styled FORTIS logo, and hour and minute hands coated in superluminova blue. There is a date window (circled in red) at 3 o’clock, though for all practical purposes it’s not that useful, as it is only visible when the watch has been ‘cleared’ through the application of a liquid/ moisture.

The luminous hands and indices glow a very bright blue, and legibility is arguably clearer when looking at it in its lumed form than in its normal frosted state.

It’s a sturdy watch that comes on a fairly comfortable transparent silicone strap which makes sense in the context of the aesthetics of the watch, but I have chosen to change it for a NATO for regular use, both for comfort and because it is a bit ‘white’ for me with the original strap.

This is clearly not a classic ‘watch person’s watch’, and will not appeal to everyone in a broader sense, if for no other reason than that legibility might be a challenge for many people. However, the Frisson’s design is in keeping with Rolf Sachs’ IQ; it is intended as a modern playful fun watch with a quirky angle, and it’s definitely that. It’s not for those with a short attention span, as you are likely to find yourself bored with it rather quickly, but its novelty hasn’t yet worn off for me, and I doubt that it will.