Today we are highlighting a watch that was released in 2017. We did not manage to cross paths with it at the time, and only recently had the opportunity to do so with thanks to H.Moser & Cie Australia, who invited us to an event with Bertrand Meylan held with their Australian retailer, Hardy Brothers.

Moser is still within its early stages here in Australia in terms of broader brand recognition, so this particular event was notable for having an unusually large number of models present, most prominently the Heritage Perpetual Moon, which I believe had not previously come here, and the subject of today’s post, the Venturer Smoky Sapphire. The event was both a chance for those who have not had much opportunity to handle Moser’s watches to do so, and to showcase a broad selection of their models.

To see a watch with a diamond dial is not difficult, but to see one that uses sapphires, is unusual. Not just this, but the 375 brilliant-cut stones (4.86 carats) are in gradually deepening shades of blue, in a reinterpretation of Moser’s distinctive fumé dials. This actually lends itself to an interesting (especially under a loupe) and attractive effect.

As well as being a different take on their classic fumé dial, this watch also references the Concept series of watches, which was introduced in 2015. These have been notable for their utterly minimalist dials, with no markers and no Moser name present on either the dial or on the curved sapphire crystal atop. 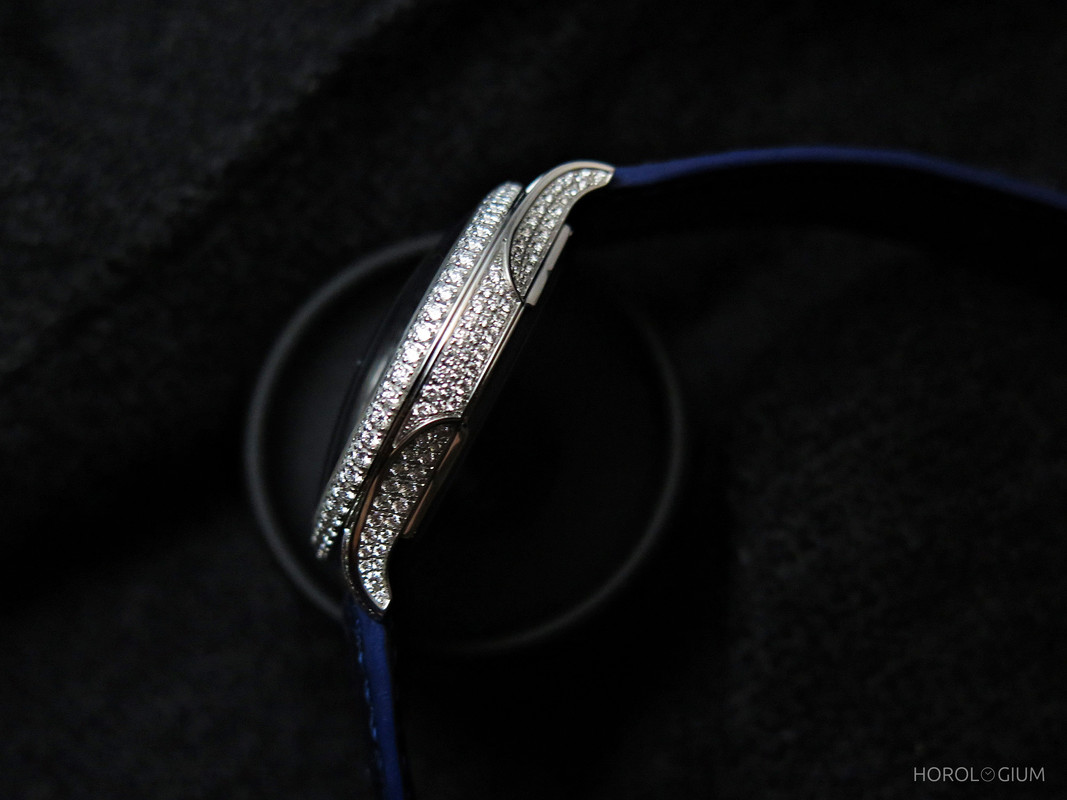 Stones are not confined to the dial, with the bezel, lugs and side of the 39mm sized 18 carat white gold case, set with a total of 3.77 carats of brilliant-cut diamonds. 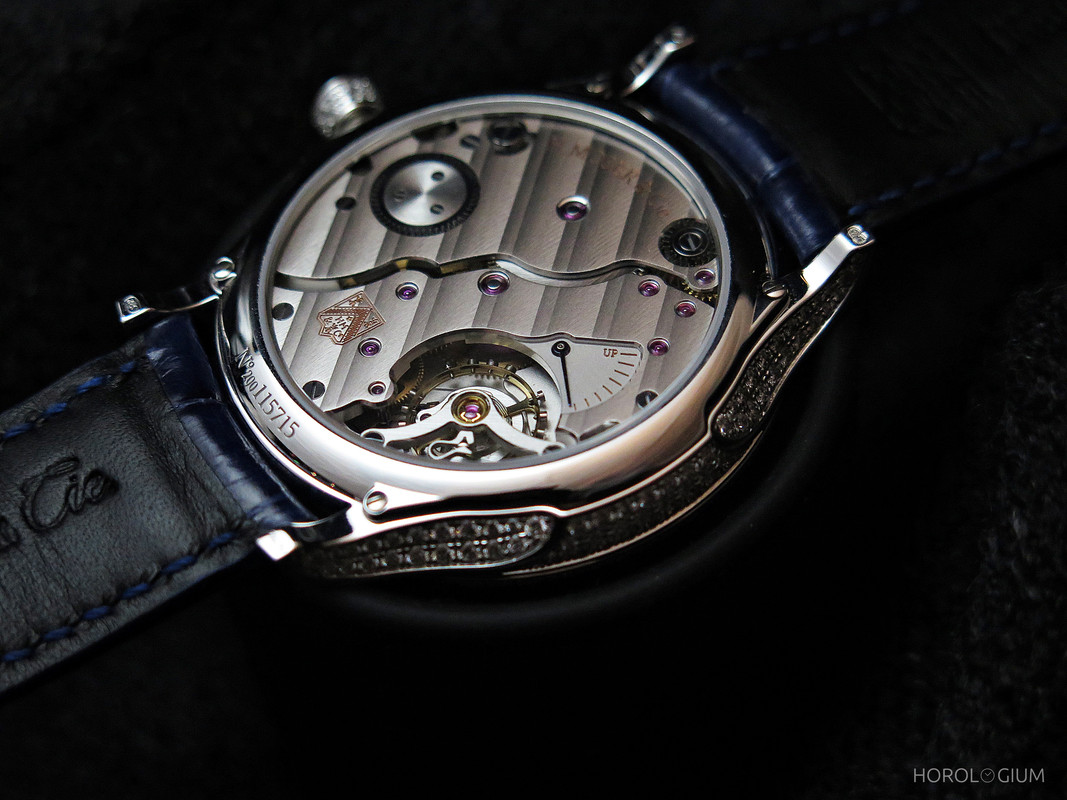 On the back we you can see that the Venturer Smoky Sapphire features the hand-wound Calibre HMC 327, which beats at 18,000 VPH and has a three day power reserve.

At the event I spent a total of almost half an hour with this watch, including some time with it strapped to my wrist. The environment was dimly lit, which allowed the dial to have flashes of sparkle as it caught the light, but it also meant that its ‘blueness’ and the effect of the colour gradation was best viewed/ appreciated with extra lighting (and a loupe). I mention this for those who might feel inclined to own such a piece and wear it in the evening. If you are looking for a watch with a single stone/ colour jewelled dial but with a difference, then this may be something for you to consider. 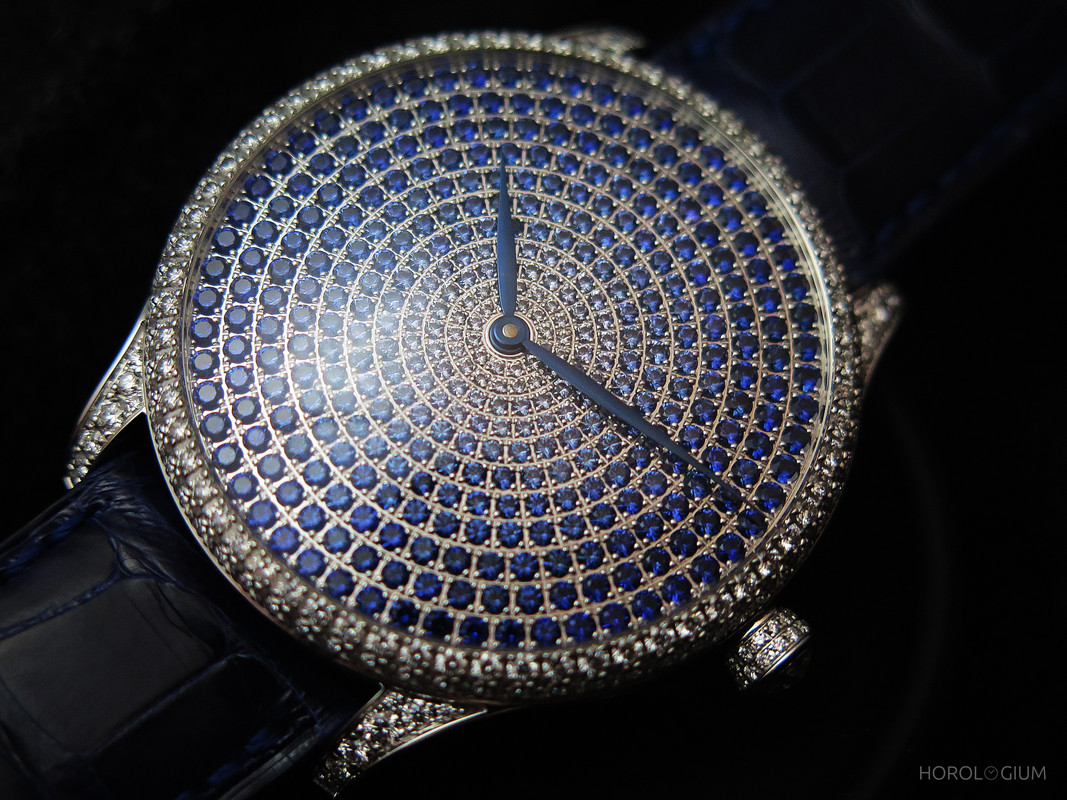