In 2012 when HYT unveiled its original hydro-mechanical watch it was one of the year’s headliners, both for its incredibly modern good looks, and for its innovation. In the years since then, they have proven themselves as survivors in a very tough market, and in addition to using new colours (including new liquid colours), they have also made design changes and technical updates, managing to build up a number of collection families each with their own personality, whilst still riffing on the original watch.

This year brings with it the new H²O, which follows the HO design that puts the liquid timekeeping on full display with a distinctive sapphire crystal that wraps around the dial side of the watch’s case. 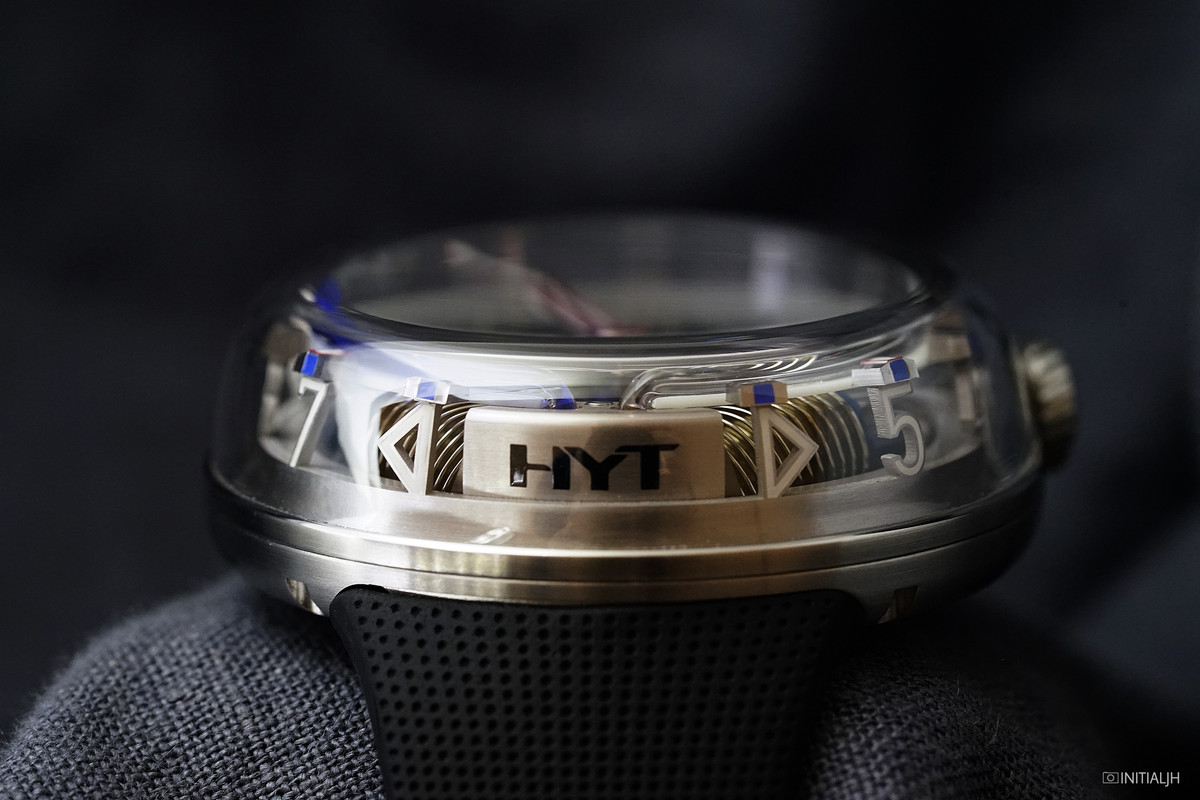 They have a notably different look than earlier HYTs, much more streamlined, and with rounder lines that HYT says is based on a smoothed (by water) stone. The new limited edition model comes in two different cases (black PVD-coated stainless steel or polished and satin-finished stainless steel) with differently coloured liquids.

The ‘hyrdomechanical horology’ system, in which a pair of bellows propels a coloured fluid through a capillary to indicate the minutes, has hours indicated via a central jumping hand. Something of particular note about the H²O is the design of the ‘floating’ hour numerals and markers, which are visible from the side because of the shape of the crystal. 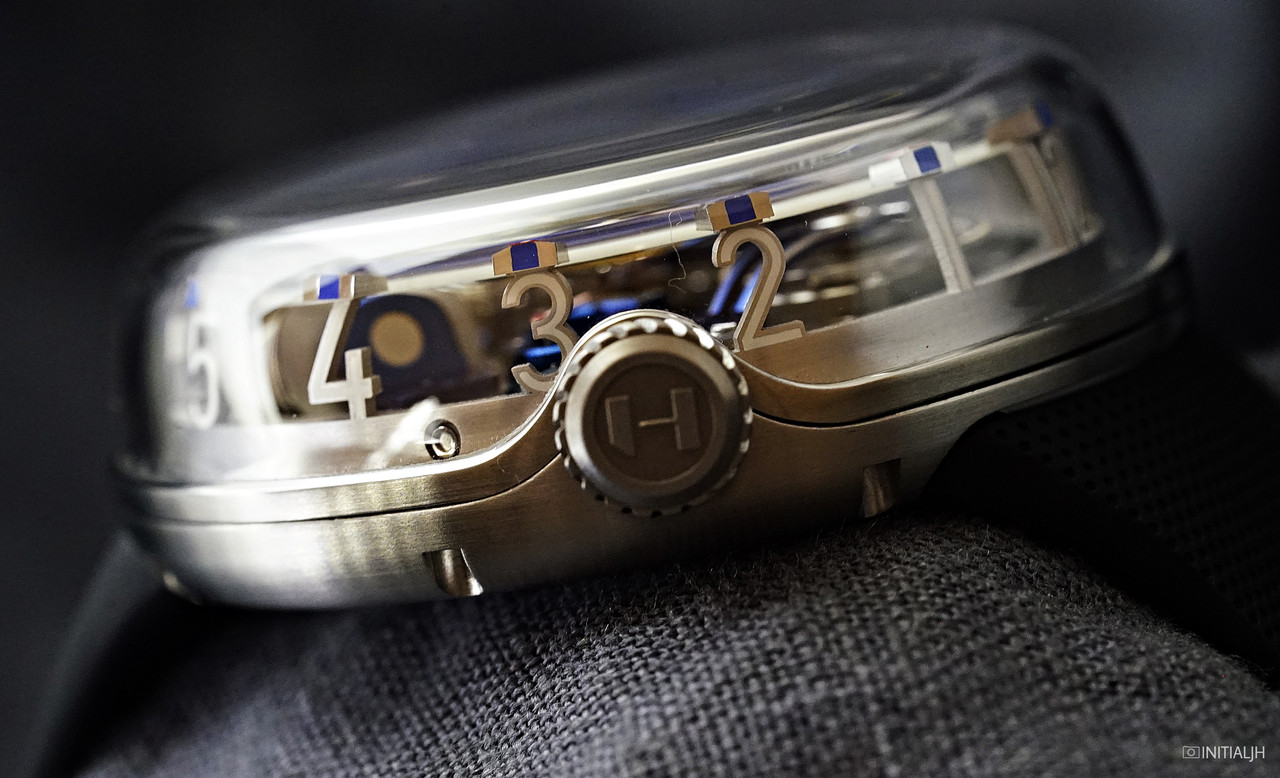 What makes the H²O special is the form in which it makes the dial and movement visible. The domed sapphire crystal rolls and curves gently from the dial to the bottom of the case in a very tactile way, letting the wearer have an uninterrupted side view of the movement. The minute markings have been applied using the hour markers as the base and have alternately printed red outlined rectangles and Arabic numerals on top of them. The red outline continues on the centrally mounted minute hand as well as the thermal indicator at 4 o’clock. 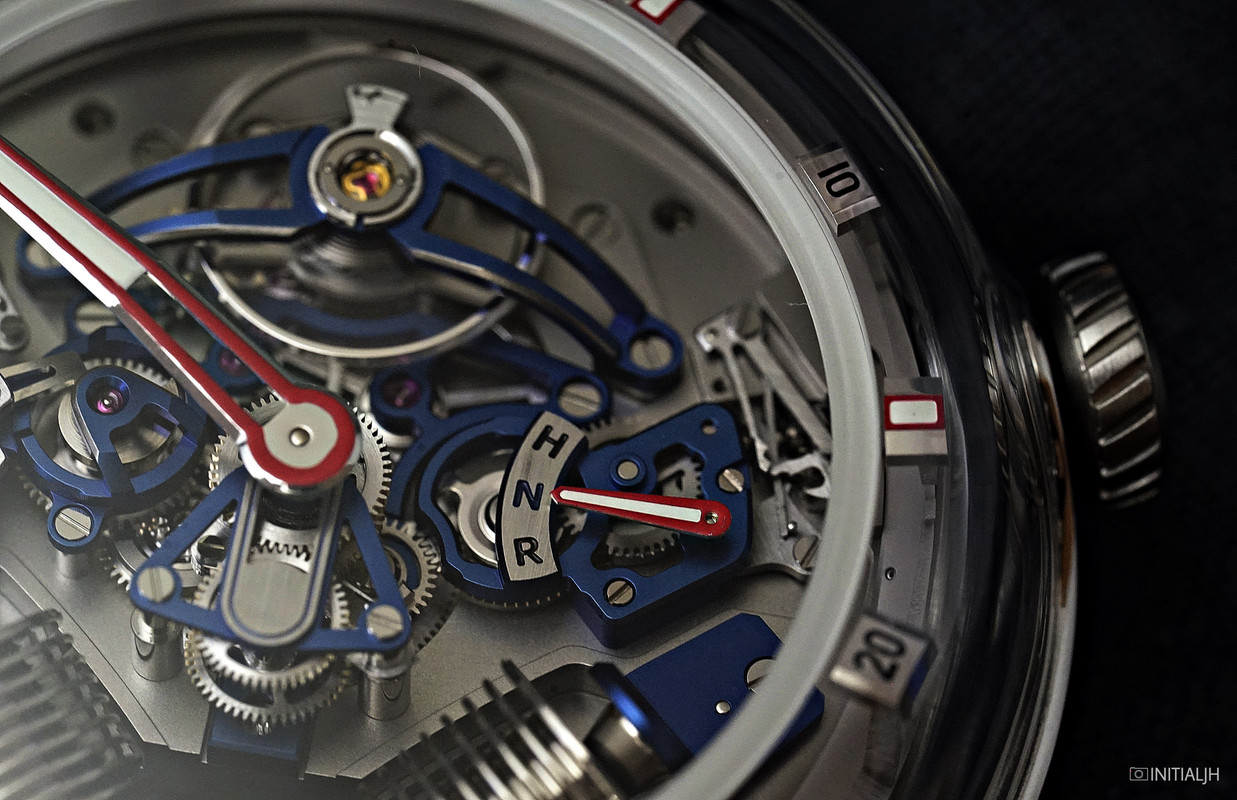 At 3 o’clock there is a crown-position indicator,which shows the wearer the (screw-down) crown’s position : ‘H’ for time setting, ‘N’ for neutral, and ‘R’ for winding (‘remonter’ in French). Also on the dial side is an element of note: the addition of a thermal indicator mentioned in the paragraph above; tiny bellows filled with its own liquid and placed inside one of the two large bellows, which serves to regulate the effect of temperature changes on the liquids inside the tubes to maintain timekeeping accuracy. 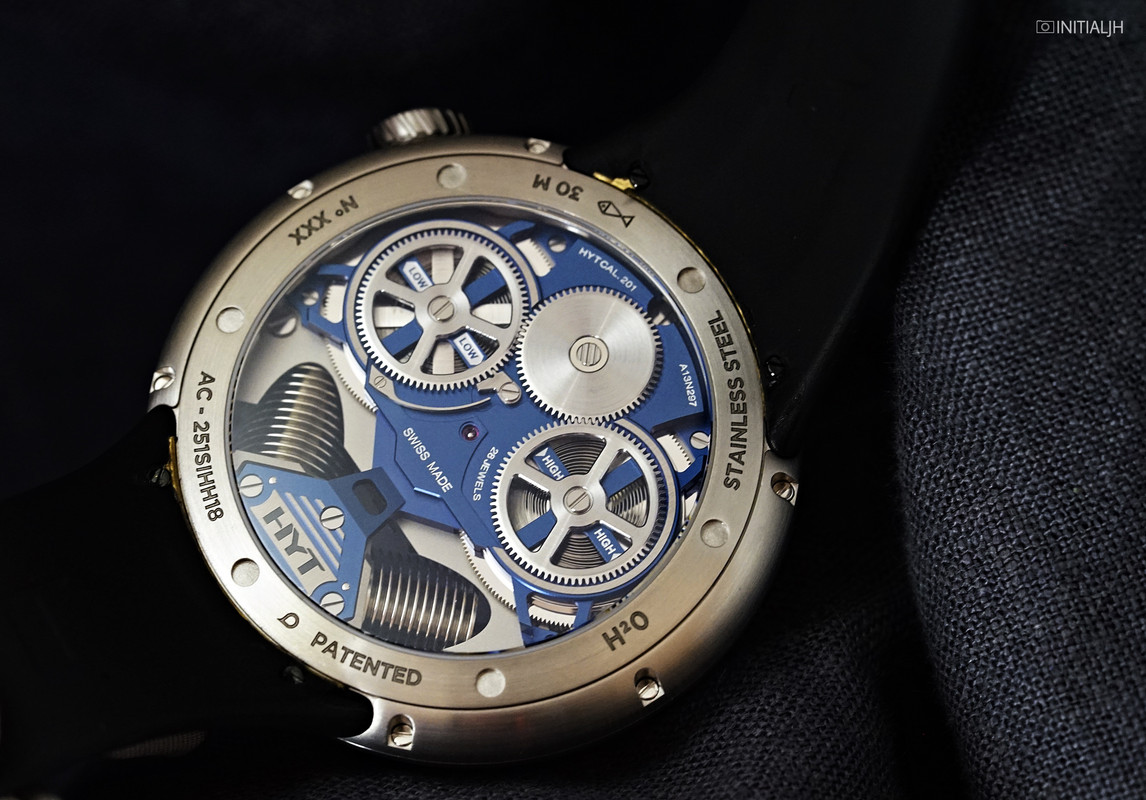 The model with the black PVD case has the bright green liquid most associated with HYT, whereas the silver-coloured steel version uses blue. The proprietary manually wound movement that powers these bellowed watches beat at 21,600VPH and have 192 hours of power reserve. It has sandblasted titanium bridges, black DLC or blue PVD coating (for the respective models), and rhodium plating on the bellows. Integrated with this mechanical movement is HYT’S patented microfluidic module with the two liquid-filled bellows along with a borosilicate glass capillary tube through which the liquids flow. 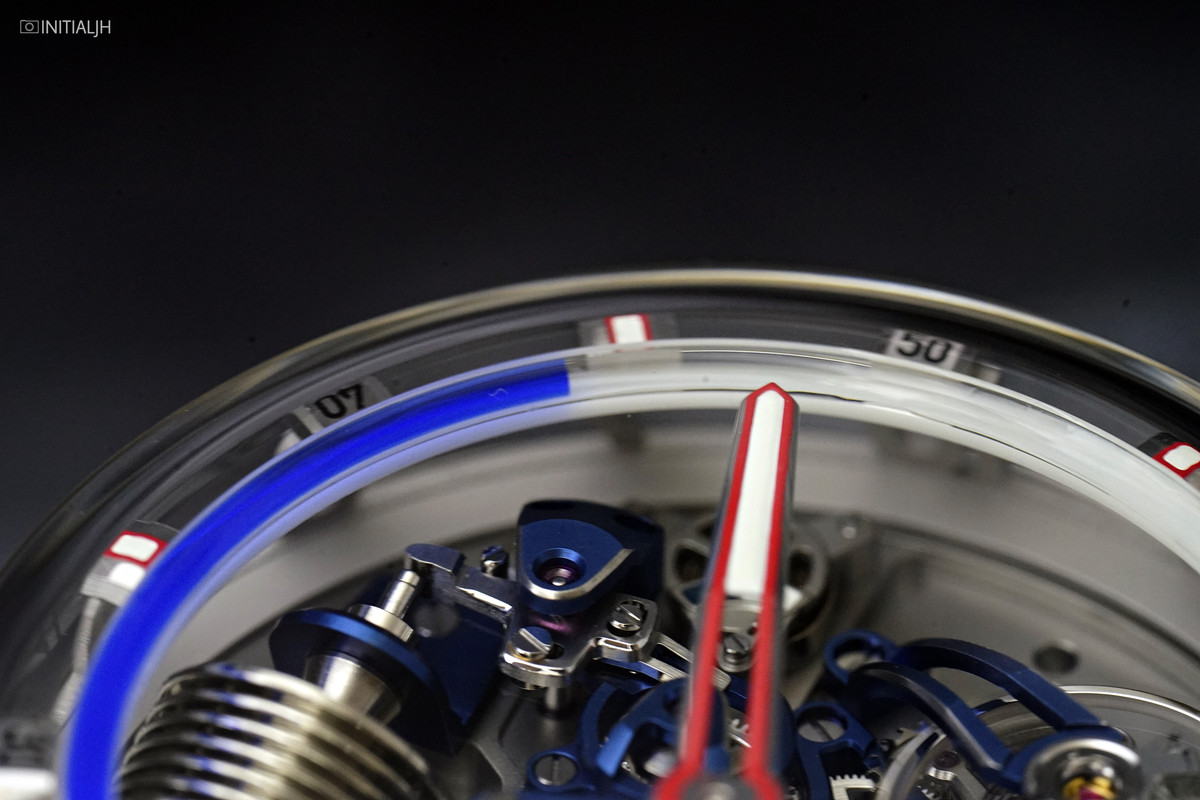 These are not small watches by any stretch, with a diametre of 51mm. However, as you can see in this wrist shot, because of its box-shaped sapphire crystal design and lack of traditional lugs, it is wearable even on an average wrist. 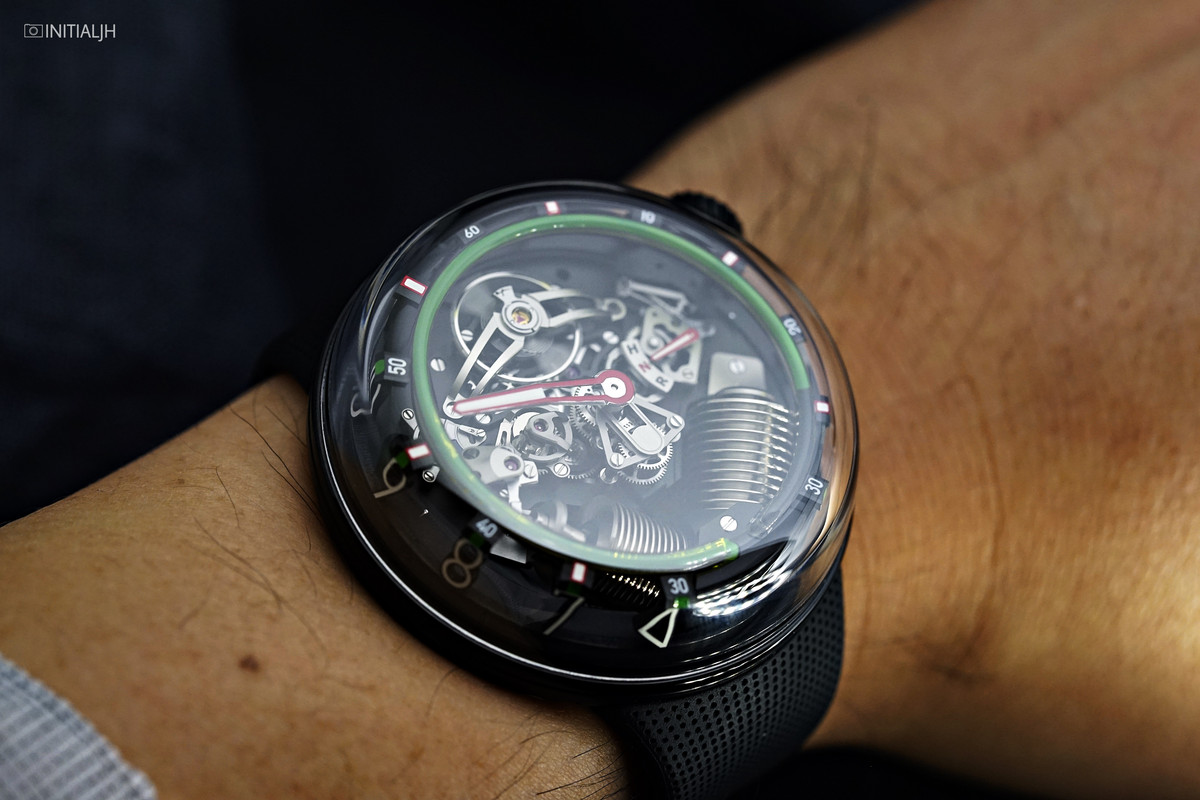 Both models come on black rubber straps with folding buckles (in black PVD coated steel for the black cased model, in titanium for the stainless steel one). They are limited to 25 pieces each, and both have an RRP of USD 95,000.