This year A. Lange & Söhne’s key piece for SIHH, and the one whose form took the traditional larger-than-life manifestation at the front of the booth, was their newest addition to their “Pour le Mérite” line, a new grande complication that combines a fusée and chain with a tourbillon, rattrapante chronograph, and a perpetual calendar.

In a way it seemed a fitting way to pay tribute to Mr Walter Lange, who died as SIHH got underway, to highlight a piece whose genesis goes back to 1994, when A. Lange & Söhne presented their Tourbillon “Pour le Mérite”, the first wristwatch with a tourbillon and a fusée and chain. It was followed in 2005 with the Tourbograph “Pour le Mérite” with a split seconds chronograph, and now we have this further progression. 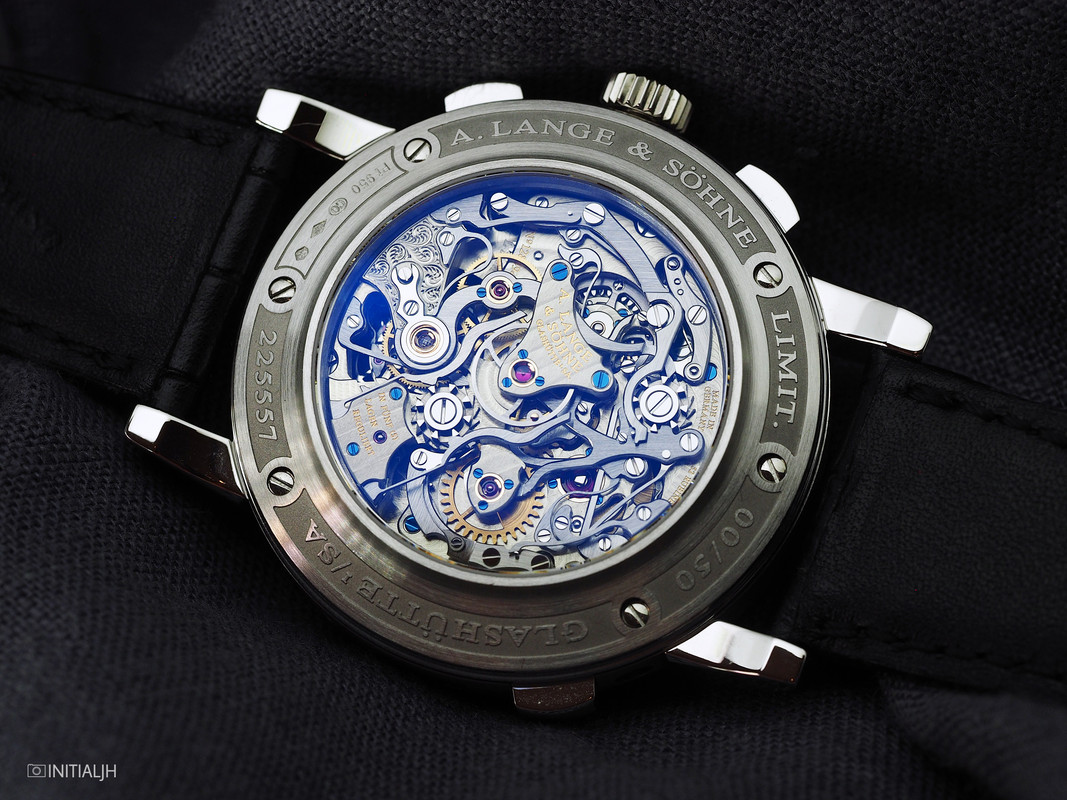 However, it is not the Lange way to do things simply when it comes to movements, and there has basically been a new Calibre L133.1 movement created, consisting of 684 parts. They have built the perpetual calendar mechanism around the tourbillon (i.e. an integrated movement rather than using a module) and emphasised the minimal loss of energy even if the chronograph is in use when the calendar, which is accurate until February 2100, is being adjusted. Additionally, there have been adjustments to the fusée and chain to counter the loss of torque at the mainspring via a planetary gearing mechanism that maintains a constant force from the mainspring barrel when the watch is being wound.

In flipping over to the back we see the finishing and movement architecture for which Lange is renowned, including ‘black polishing’ on the tourbillon bridge and all those hand bevelled angles alongside blued screws, screwed gold chatons, bridges and plates made of untreated German silver, and hand engraving. 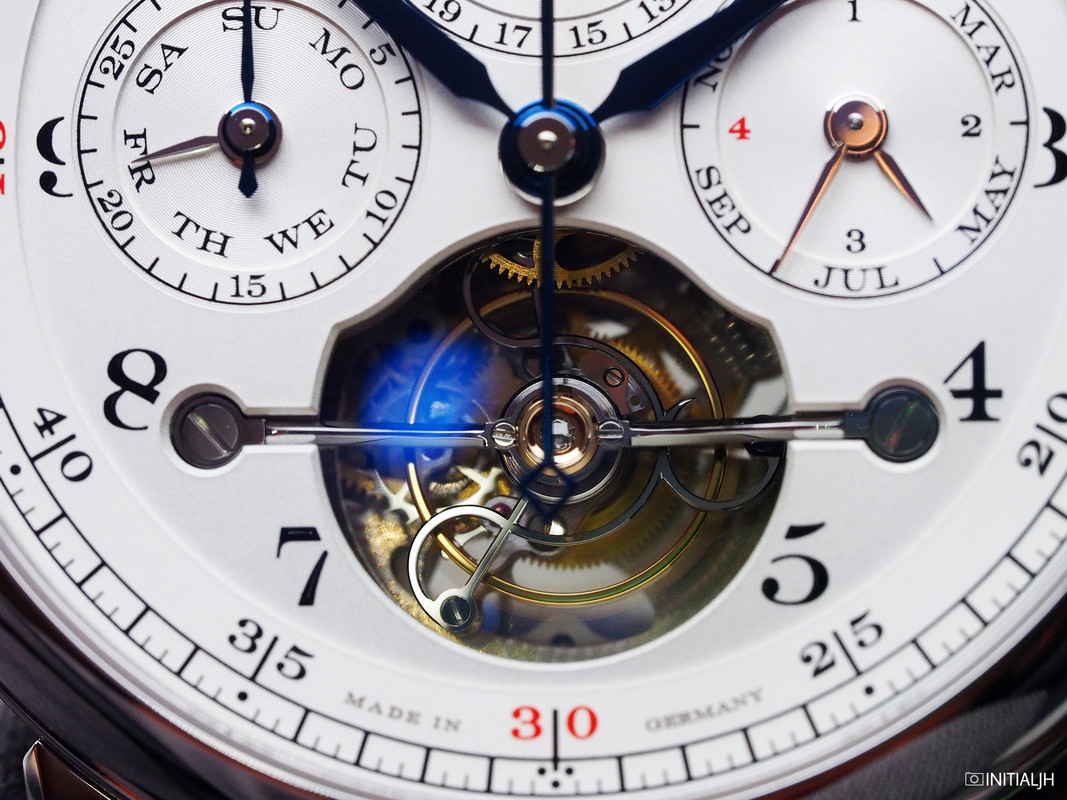 The dial is classically traditional, with Arabic numerals, a railway-track minute scale, blued steel hands for the time and rhodiumed gold hands for the calendar. The calendar has three subsidiary dials – the date at 12 o’clock, day at 9 o’clock, and month and leap year at 3 o’clock. The gold moon-phase display is accurate for 122.6 years. 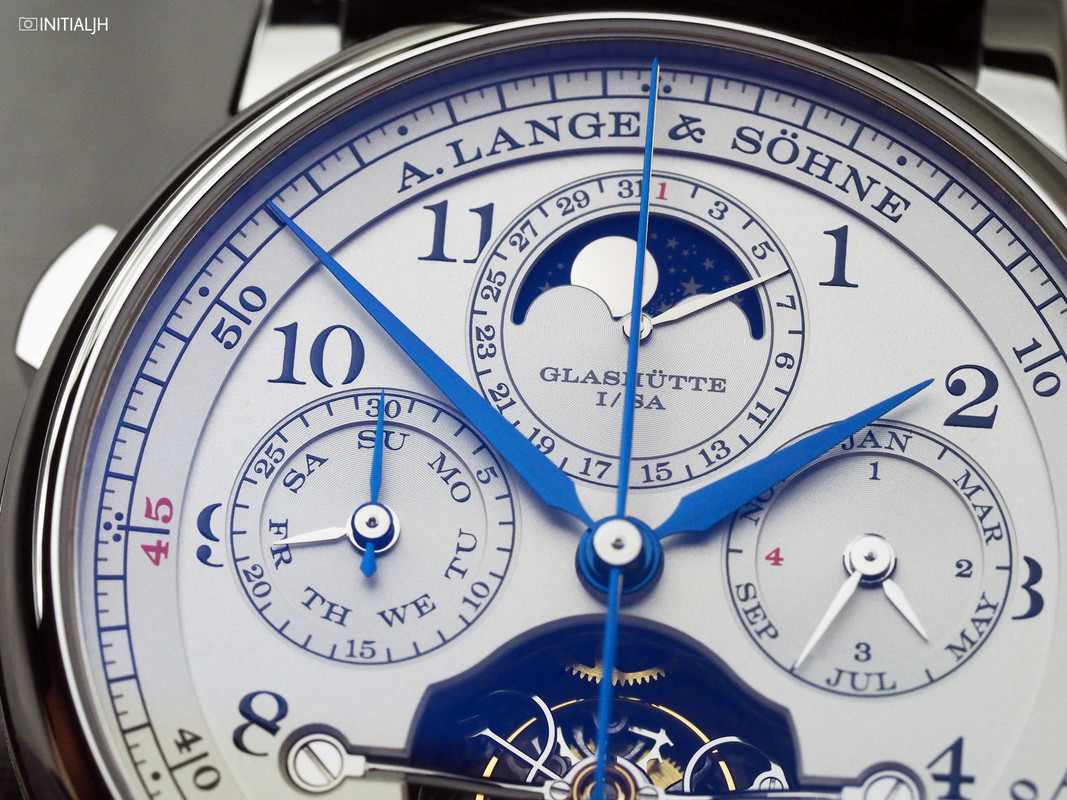 As a result of the development of an integrated movement for this their flagship 2017 model rather remarkably, the 43mm case in which this new watch comes is the same thickness as previous Pour le Mérite models. Which makes it very wearable if you have the inclination and funds.

The A. Lange & Söhne SIHH 2017 Tourbograph Perpetual Pour le Mérite will be made in a limited edition of fifty piece with an RRP of EUR 480,000.