With last month’s opening of Australia’s first Seiko boutique in Sydney’s Queen Victoria Building it seems the right time to share with you a watch that is one of Seiko’s premium pieces.

It is only in recent years that the (arguably still niche) world of high-end Seikos has gained some solid traction outside of Japan. The fact that many models have historically been ‘Japan only’ has perhaps added to its niche status, but as was pointed out during Seiko’s Baselworld 2016 press conference, the increasing popularity Grand Seikos is important to Seiko’s worldwide growth plans.

One of the Seiko high-end lines about which I’ve written before is the Spring Drive, named after the eponymous movement. As as segue within the Spring Drive line there was, for a brief two years between 2007 and 2009, a series of models called Izul, the only known Spring Drives that used the automatic Calibre 5R85 (49 jewels) sans GMT function, with a power reserve of 72 hours. Izul was Seiko’s fourth ‘premium brand’, the others being Grand Seiko, Galante, and Credor.

It is not just in Australia that Seiko is associated primarily with a (huge) range of moderately priced  watches, but with this new boutique and a resident Grand Seiko specialist the full range of the brand’s wares will be more widely known here. Grand Seiko has been available in Australia for a a number of years now but not so Credor. Until now.

Today post is about the Credor Eichi II. As is the case with the rest of the top of the line Credor timepieces the Eichi II is made by Seiko’s Micro Artist Studio located in Shiojiri, in Nagano Prefecture. As its name indicates it is the second generation of Eichis, time-only watches whose focus is on achieving the highest level of finishing possible and whose inspiration is Philippe Dufour, from whom some of the members of Seiko’s Micro Artist Studio have undertaken training. With its international launch at Baselworld 2015 the Eichi II is a scarce beast, with only about twenty made per annum. 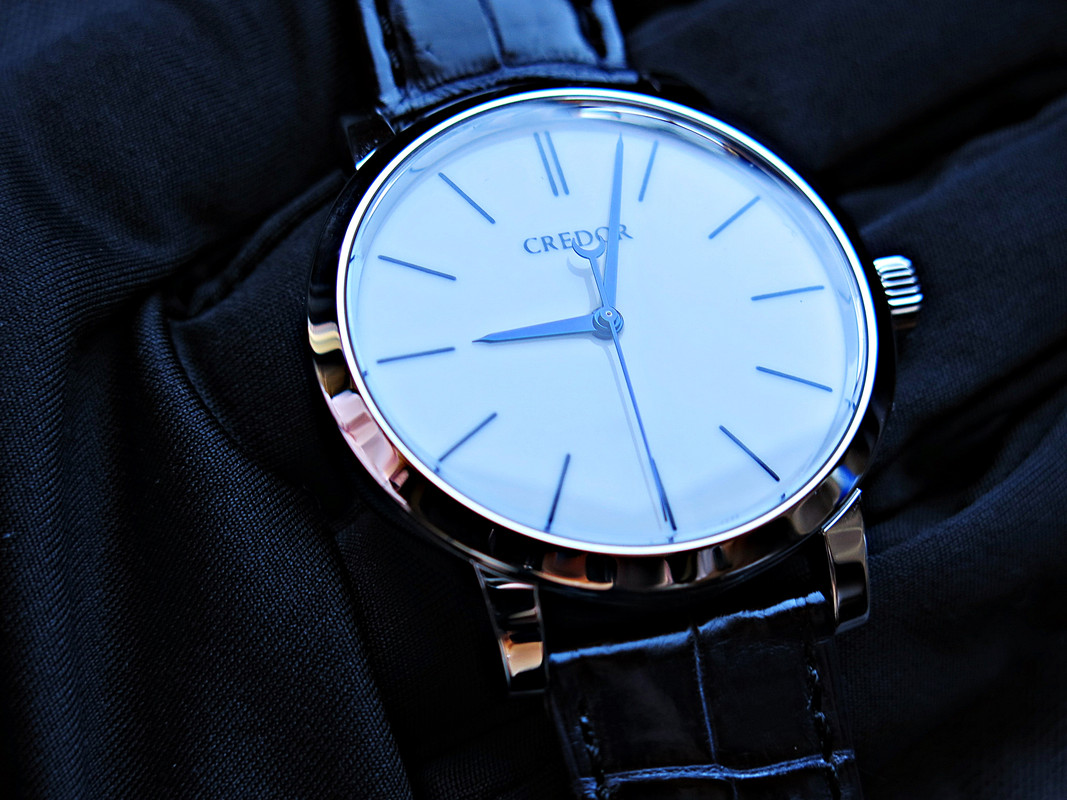 The Eichi II has continued the key aspects of the first generation, with its focus on simple functional aesthetics realised using platinum (including, unusually, the hefty and large deployant buckle made of two alloys, platinum 950 which is standard for watches and platinum 900), in-house painted porcelain for the dial, and blued steel.

Similar in style and execution to the first generation, the most noticeable changes are a larger case and cleaner dial. The first Eichi was 35mm, a not-so-contemporary size. At 39mm with a thickness of 10.3mm, the Eichi II is more suited to modern preferences, but a larger size also ‘opens up’ the dial so that its glow (and it does glow) can take full flight. Had this second Eichi been 35mm I strongly suspect that I would not have taken to it as much. As it is, it surprised me, as I was concerned that I would be rather ambivalent towards it, and said as much to its owner before I saw it. 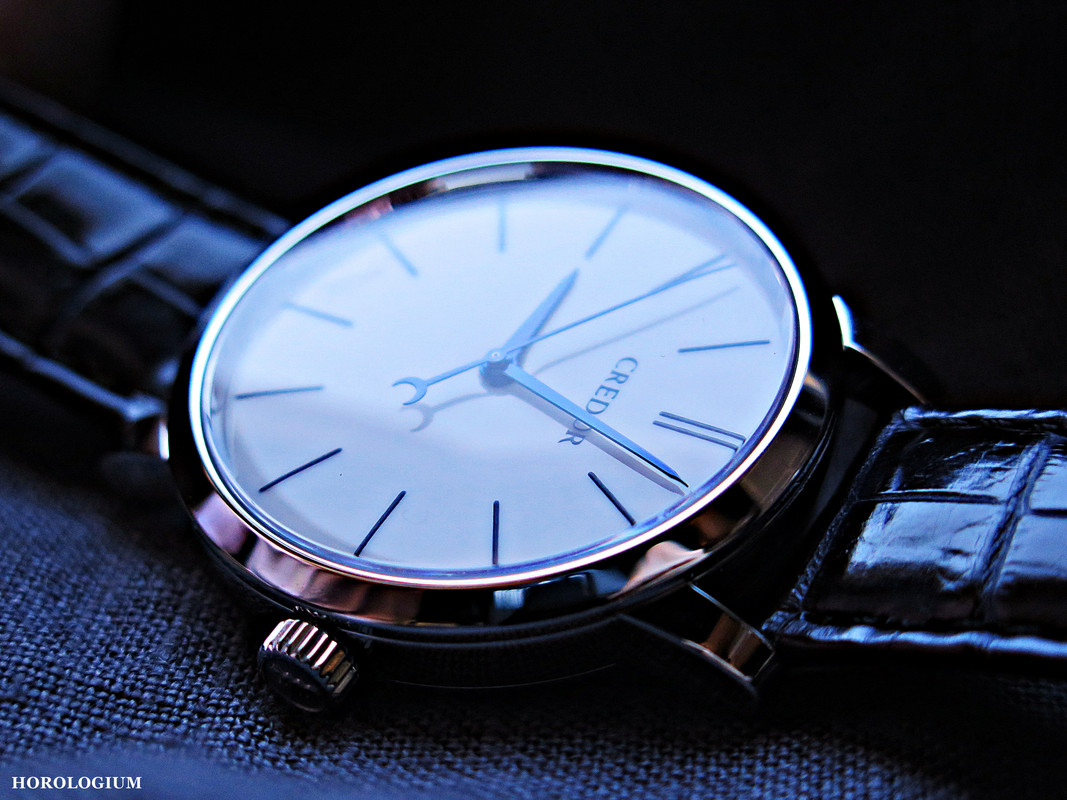 This is a plain (and deliberately so) watch. Many if not most similarly plain watches are just that, whether you look at them as they sit on your wrist or whether you look at them under a loupe. There are, as always, exceptions, but by and large even when viewed at close quarters it’s often about details to do with finishing and perhaps even dial textures and the like. The Eichi II however, gets better the closer you look at it, and this formed a critical part of why I went from being not-quite-a-sceptic to being a convert. Don’t get me wrong, it is actually quite beautiful to look at from a distance, with its almost starkly white white porcelain dial (Eichi I’s dial was Noritake but Eichi II’s dial is by an unknown maker), but it is the ‘handmade’ details that you can only see under magnification that are what makes it for me. 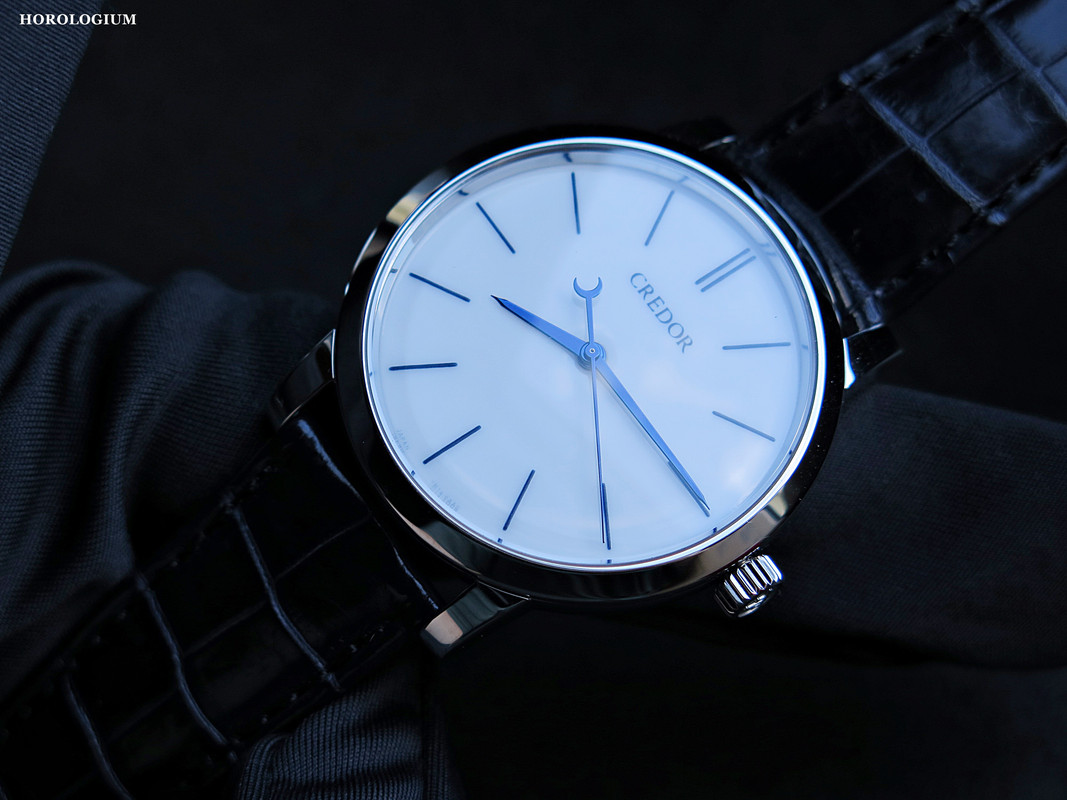 All markings on the dial; indices, logo/ name, are painted by a single person at the Micro Artist Studio and in a dark blue to match the blued steel hands, the latter tapering to a rather fine tip. With markers rather than numerals, this makes for a cleaner dial than its predecessor. The crescent on the end of the seconds hand makes for a nice ‘break’ from the austere dial. It purportedly takes an entire day to complete one dial. Up close you can clearly see that everything is hand-painted, with that slight irregularity (and granularity of paint) that comes from the human touch, the same irregularity which is a large part of the charm of something handmade. To photograph it is actually a challenging watch, as the blue varies quite a lot in darkness depending on the lighting and angle at which light falls on the dial.

Inside and visible through the back is the Calibre 7R14 hand-wound hybrid Spring Drive movement, with its electronically-controlled regulation via an integrated circuit. Here, as much as for the dial, is where it pays to look under a loupe, although even to the naked eye the overall impression is a very modern clean feel, with the finishing and the skeleton bellflower motif (the symbol of Shiojiri, the town in which the Micro Artist Studio is located), superb. 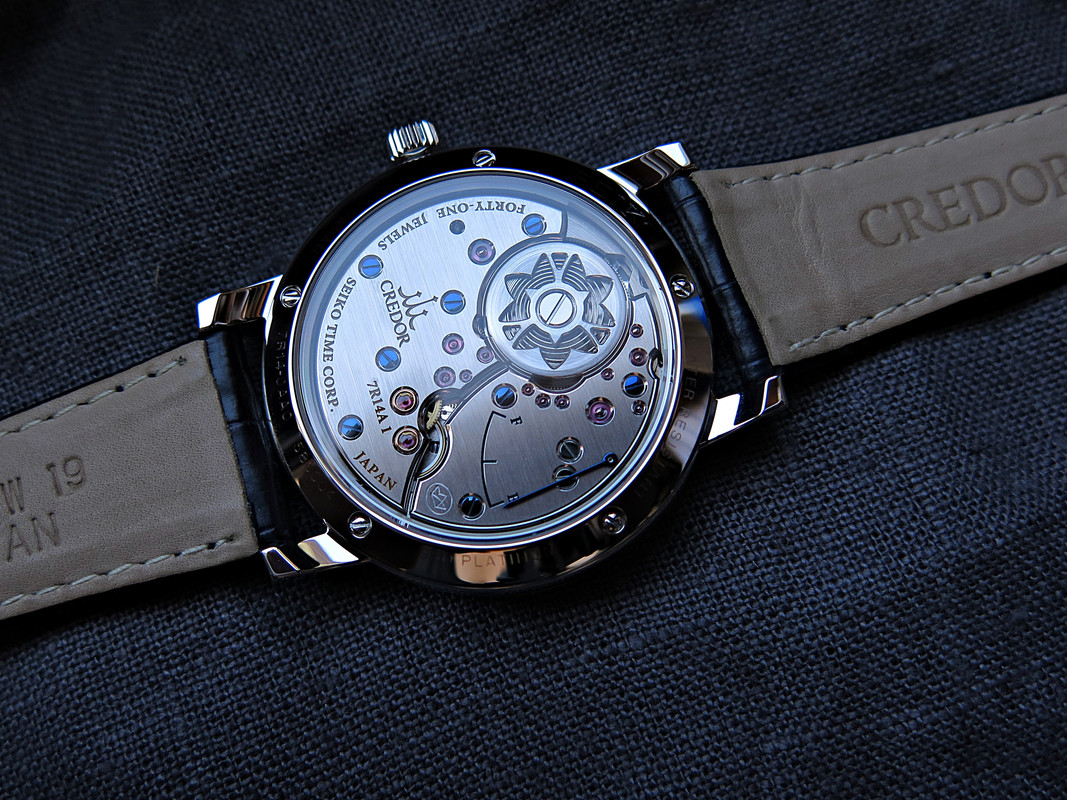 To their credit they’ve not done too much with decoration, which means that the skill and sharpness and width of the bevelling (the latter the widest that this watch’s owner has seen), graining, and polishing is highlighted. The way in which the flower motif has been incorporated into the movement is really rather special, with the flower itself on the mainspring barrel first catching the eye, then the stem and leaves of the gap between the two bridges… 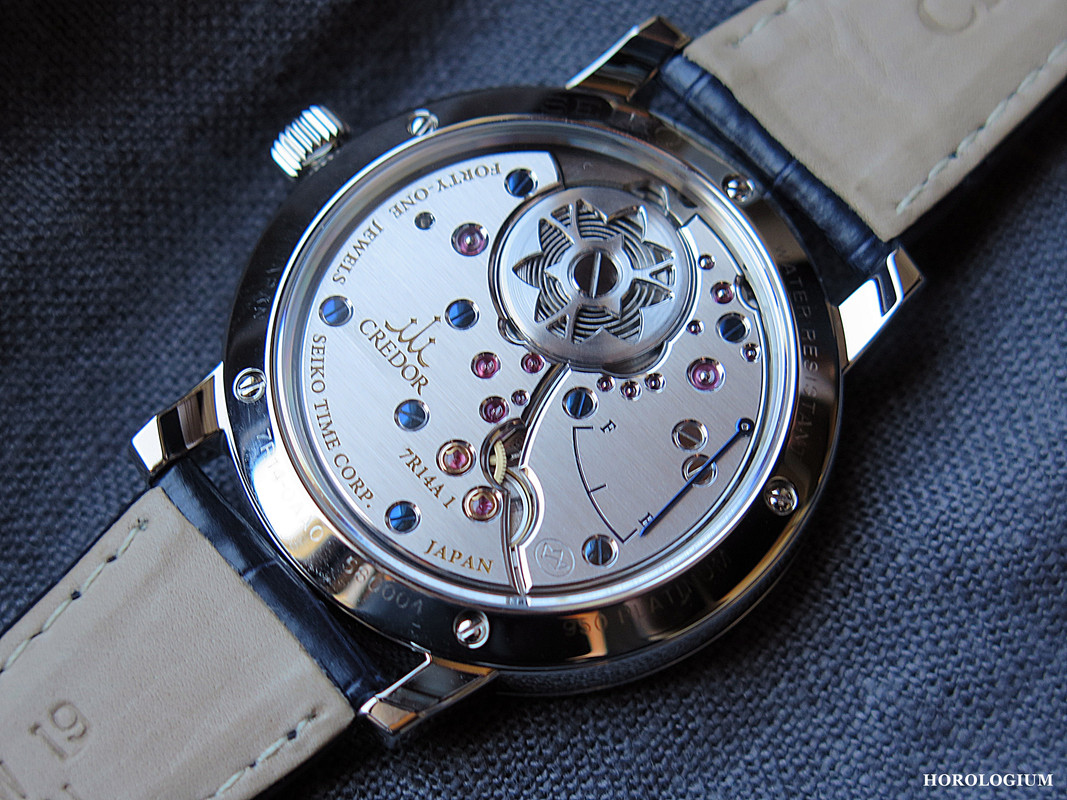 In order to maintain the design purity of the dial, on the Eichi II the power reserve indicator has been put on the back of the watch. 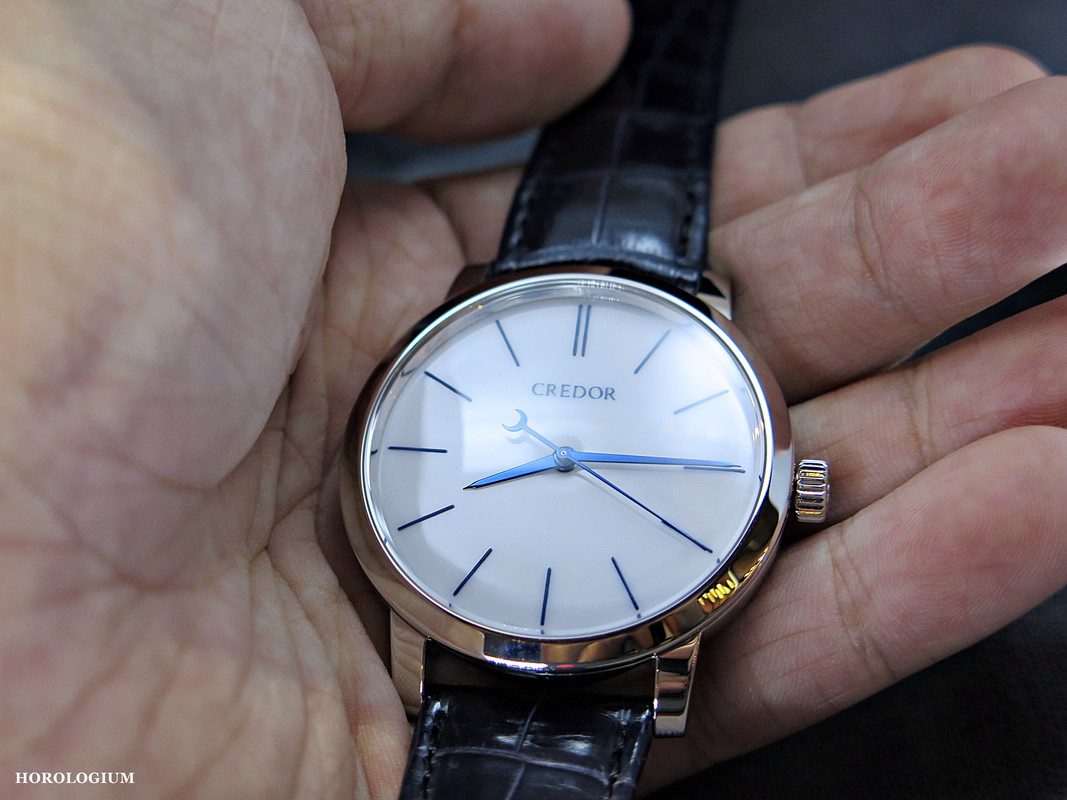 The Eichi II was created to mark the 40th anniversary of the Credor line and the 15th anniversary of the Spring Drive movement. Believed by some to be in the running to be the finest three-handed watch currently being made, there is no doubt that in terms of finishing, both front and back, it really is up there with the best. It may not be to everyone’s tastes (or pockets, at 5.7m Yen), but the finishing is worth boasting about and yes, it is very much a luxury timepiece.