Tudor released a number of new Black Bays at Watches & Wonders 2022, but the standout was without question the Black Bay Pro, a new reference that should sell like hotcakes. It adds a watch with ‘Explorer’ vibes to the Black Bay family at a much more affordable price point and is much more achievable as a purchase.

This is a new model with a new (‘old’) aesthetic. The stainless steel case is 39mm with a mix of satin-brushed and polished finishing (along with 200m water resistance), with a 24 hour fixed bezel, and of course an orange 24-hour “Snowflake” hand.

This Black Bay has undoubtedly been the success story of the brand’s twenty first century success story, with more iterations than perhaps even they thought might be possible when it was first launched.

This new Black Bay Pro model isn’t an ‘Explorer lite’ but does actually have a basis in terms of the brand’s history with ‘official’ tool watches both with the Marine Nationale (French Navy) and actual explorers such as the British North Greenland Expedition (BNGE) which used Tudor Oyster Princes for two years.

Last year, we mentioned Tudor’s announcement of an official partnership with the Marine Nationale, their first official partnership since the 1980s. Their relationship started in 1956 when the Toulon-based Underwater Study and Research Group (Groupement d’Etude et de Recherches Sous-marines aka G.E.R.S.) received both reference 7922 and 7923 Submariners for assessment and feedback.

Following this, in 1958 the updated Reference 7924, with a new case, over-sized crown (hence the nickname ‘Big Crown’) and 200m water resistance was sent to the MN. The 7924 had a winding crown that was vulnerable to damage whilst underwater. To address this, Tudor developed the Reference 7928, the first Tudor Submariner with (square) crown guards on either side. It was produced for almost a decade, during which it was slightly modified in case and dial design. The crown guards went from square to pointed to rounded.

In the late 1960s Tudor unveiled a new dial and hand layout – what is now commonly called the ‘Snowflake’ watches, first issued in 1974, and officially used until 1983. Tudor ceased issuing the snowflake hands circa 1980, going back to the mercedes hands. The Marine Nationale ordered Submariners from Tudor until the early/ mid 1980s. It will be interesting to see what the fruits of this relationship will be. 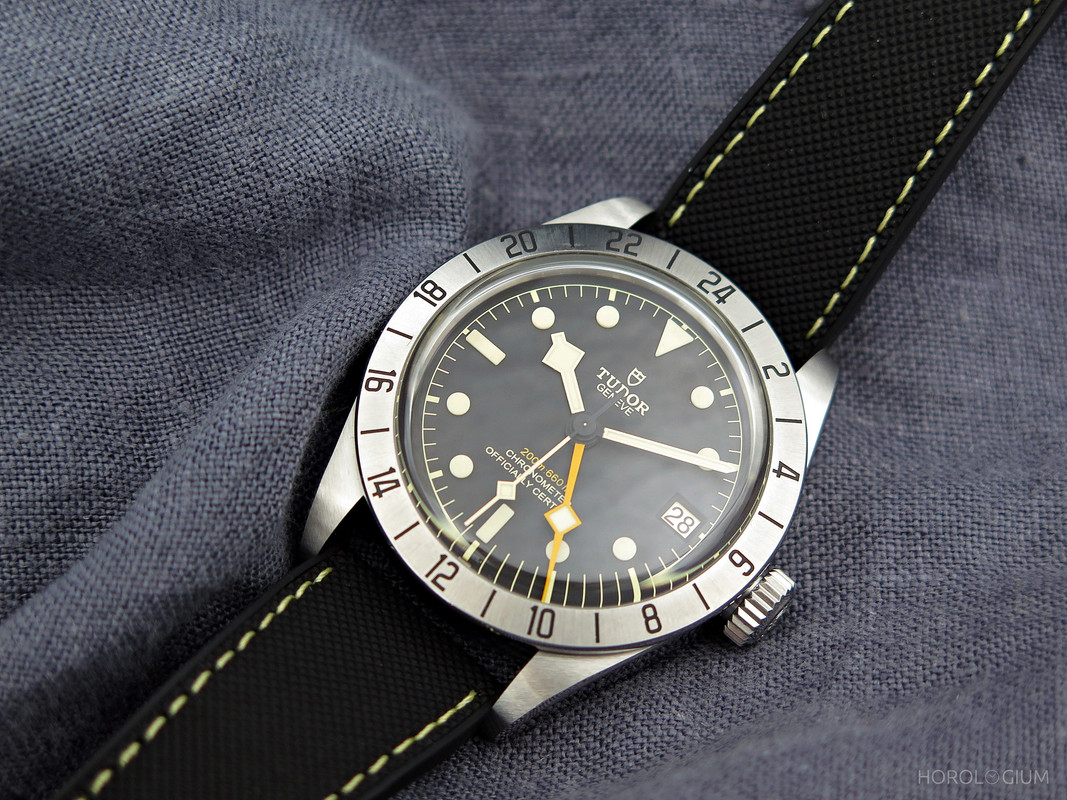 The domed black dial is grained matte black. The hour markers that are new, and not the metal rings with lume inside – the applied markers are monobloc ceramic markers that are attached directly to the dial. This ceramic is mixed with Super-LumiNova and the block just stuck onto the dial. Of course, they’ve gone with the beige ‘faux vintage’ colour look.

On the new Pro, both the main hour and 24-hour hands are ‘snowflakes’. It can function in two ways – either as an independent GMT hand or, as a 24-hour hand.

The winding crown has been redesigned, with the square-edged cylindrical crown with exposed tube gone, replaced by a winding crown set flush to the middle case band (the tube is no longer visible). 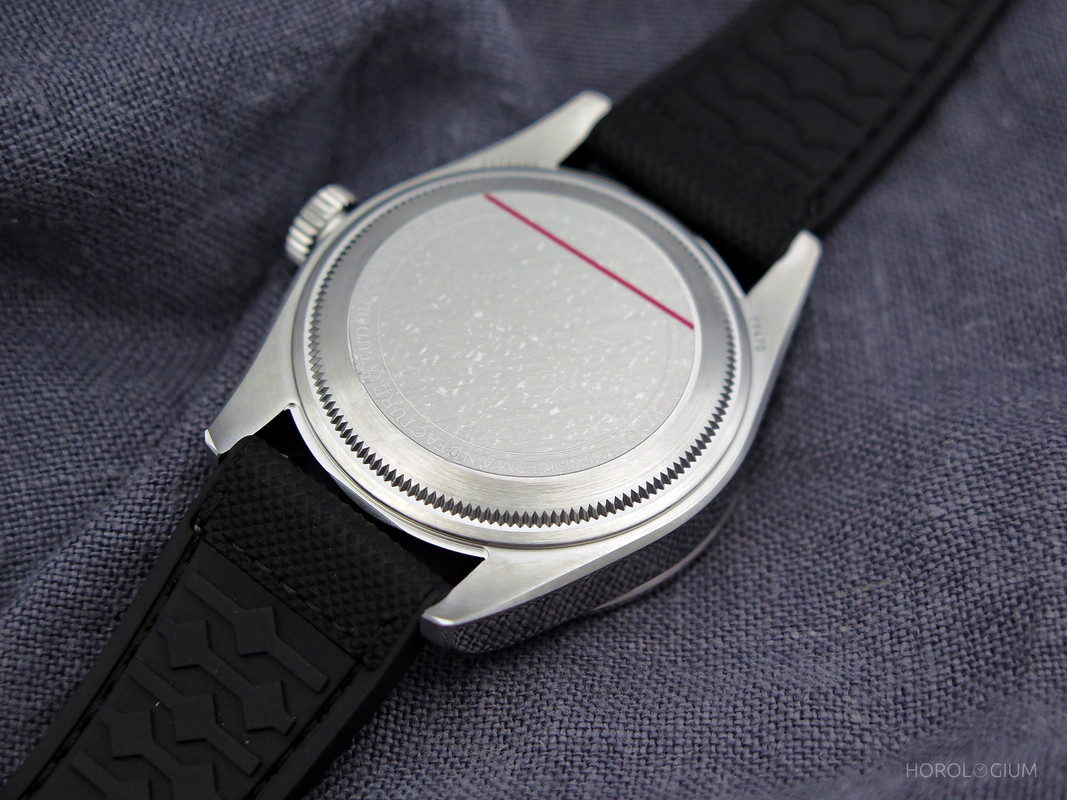 Inside is the Tudor Calibre MT5652 with GMT function. The COSC-certified in-house movement with built-in GMT (not a module) was developed by TUDOR for the Black Bay Pro model and has a power reserve of 70 hours.

The Tudor fabric straps are woven in France on 19th century Jacquard loom by Julien Faure in St-Etienne. For the Black Bay Pro, TUDOR has a black strap with a yellow band from them.

The steel bracelet option is inspired by the folding riveted bracelets made by the brand in the 1950s and 1960s which had visible rivet heads on the side of the bracelet that held the links together. The links also had a distinct stepped construction. Both of theses are found on the current bracelet, which has solid links and laser-finished rivet-style heads. It has a “T-fit” rapid size-adjustment system with a new clasp (with five positions) is the on this bracelet, with adjustment up to 8mm.

Finally, the Black Bay Pro is also available with a fabric-like hybrid strap in fused rubber and black leather with a folding clasp with contrast yellow stitching (as in these photos).

Priced at CHF 3,800/ AUD 5,430 on the bracelet and CHF 3,500/ AUD 5,010 on leather or fabric, the Tudor Black Bay Pro ticks the boxes for modern Tudor fans and those who like the ‘old Explorers’. It is a good looking and very wearable watch with vintage nods that aren’t an homage but also with enough of a distinct personality of its own that it does not need to play second fiddle to others. It also works not just as a stand-alone Black Bay acquisition, but also as an additional watch for those who already have a Black Bay.