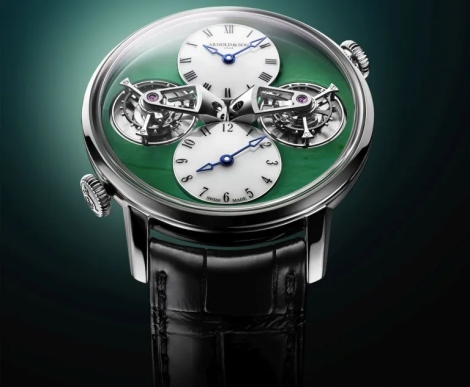 The two new pieces come in a 5N red gold or white gold 43.5mm sized case. The sapphire crystal on the front is domed because of the height of the two tourbillons. These are attached to a skeletonised, cantilevered bridge, and are made in the same gold as the case. The local time is at 12 o’clock, in Roman numerals. The time of the second location is at six o’clock and in Arabic numerals. The two time zones are set independently, down to the minute. Arnold & Son’s double time zone doesn’t use the traditionally popular second hour hand but gives each time zone its own regulating organ.

The two tourbillon bridges are 18 carat gold, mirror polished with satin finish, and hand-polished and chamfered. As are the tourbillon cages.

Able to be seen through the case back, the manually-wound Calibre A&S8513 powering the Double Tourbillon has two barrels and two crowns that control the two time zones. It beats at 21,600 VPH and has a power reserve of 90 hours. It features Côtes de Genève on the main plate, double snailing of the barrels, sunray decoration, and polished gold bezels held in place by blued screws. The bridges are hand-polished and either rhodium (red gold model) or NAC (white gold model). The two new Double Tourbillon Jade pieces both come on an alligator strap with a pin buckle in the matching gold. As mentioned, they are both unique pieces, with a price of CHF 198,000 (excluding taxes).