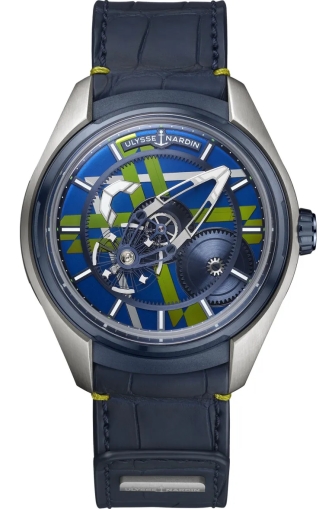 Remember the recent Freak X Razzle Dazzle? Meet the new limited edition FREAK X Marquetry, which again uses the model’s dial as a vehicle for a strong vivid visual design, only this time, it is a mosaic made of silicium (silicon) marquetry.

There is a history with Ulysse Nardin and silicon. In 2001 they released the Freak, which used silicon in its escapement. Since the first Freak, the brand has built on and expanded its innovative nature, and in the last decade, use of this light but strong material has become more widespread in watch movements e.g. for balance/ hair springs because of its shock resistance and antimagnetic properties. It helps with stability, performance, and accuracy. Not to mention the lubrication advantages. 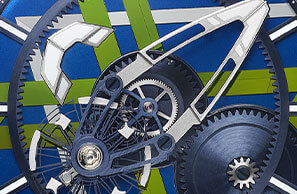 For this new Freak X limited edition, Ulysse Nardin has used the material to produce a matte effect on the blue part of the decorative plate, with a large green ‘X’ representing the model’s name. Silicium marquetry involves assembling wafers of silicon cut into segments with a plasma accelerator. The approximately 120 segments are place one on top of the other to create the mosaic.

The indices and bridges are in blue and there is the use of Super-LumiNova The 43mm-sized case is titanium with blue PVD and has a water resistance of 50m.

As those familiar with the model will know, there is a crown but there are no hands – the central bridge acts as a minute hand. The automatic Calibre UN-230 flying carrousel movement that powers it rotates around its own axis once every hour, with a silicium balance wheel, escapement wheel, balance spring and anchor in silicium. The balance wheel has nickel inserts. The movement is an amalgam and reworking of the Calibres UN-118 and Freak Vision UN-250, beats at 21,600VPH, and has 72 hours of power reserve.

As mentioned, like the Freak X Razzle Dazzle, this new piece is also visually vivid, but it is also a more direct follow up – the Freak X with silicium marquetry dials was launched in 2019 with two limited edition (18 pieces) variants, one in shades of blue with a bronze-brownish ‘X’ and the other with a blue and purple background and silver ‘X’.