Alongside the modern Fifty Fathoms models, which are their own thing, Blancpain periodically releases some heritage-inspired models that are homages or re-interpretations of the original models, targeted at the vintage and collector audience.

Now, Blancpain have announced a new limited edition re-interpretation of the 1960s’ Fifty Fathoms “no radiations” with its classic symbol now in a 2021 form.

In 1952, the French government created an elite team within the Navy called the ‘Nageurs de combat’ (combat swimmers). Headed by Captain Bob Maloubier, their missions included underwater intelligence, sabotage operations and clandestine port attacks. As underwater diving was still in its infancy, Maloubier and his team had to design their diving equipment from scratch. This took two years, and included a watch. The team had diving watches, but not to Maloubier’s satisfaction, so in conjunction with Lieutenant Claude Riffaud, he set about designing a better one. Their design was first submitted to Lip, who weren’t interested.

Eventually, Maloubier and Riffaud convinced Blancpain’s Jehan-Jacques Fiechter (the nephew of Betty Fiechter who, with André Leal, had purchased Blancpain in June 1933), himself a keen diver, to produce it, and they named it the ‘Fifty Fathoms’. A fathom is a unit of length used as a depth measurement in English-speaking countries, corresponding to a depth of 1.829 metres – fifty fathoms is 91.45 metres, the depth that was then able to be reached with traditional diving equipment.

The Fifty Fathoms that went into production was not the exact design that Maloubier and Riffaud had presented, as Fiechter used his own diving experience to make some adaptations. These included a screw-down caseback with a double ‘O-ring’ system, and a humidity indicator at 6 o’clock (blue if the air in the case was dry, pink if water had penetrated the watch case).

Blancpain were unable to sell their watches directly to the French navy, and had to do so to the Nageurs de combat via Spirotechnique, who were the official suppliers of scuba diving equipment to the French armed forces. Established in 1946, La Spirotechnique, which later became ‘Aqua Lung’, had its origins in 1942-43, when Jacques Yves Cousteau and engineer Emille Gagnan, who was working for L’air Liquide, a French company specialising in compressed gas, created the first scuba regulator.

At the time, Lip was a dominant player in the French watch market. Blancpain was unknown. This meant that Blancpain and Lip had to sign a marketing and distribution deal to get a foothold in the French market. In 1954 the Fifty Fathoms watches were launched, with both Lip and Blancpain markings on the dial.

Within a decade of its launch, Blancpain’s Fifty Fathoms had been adopted by a few specialist oceanographic exploration and research organisations. Most famously, Jacques Cousteau selected the Fifty Fathoms as the dive watch of choice for his 1956 Cannes Film Festival Palme d’Or winning ‘Le monde du silence’ (The Silent World).

From the early 1950s through the 1970s, the Fifty Fathoms became popular amongst the military, and used by the armed forces of Israel, Germany, Sweden, Norway, Denmark, Poland, Finland and the U.S. Which brings us to today’s new piece.

In the mid 1960s, the German Kampfschwimmer commando unit acquired the Fifty Fathoms RPG-1 model aka “BUND(eswehr) No Rad” with a “no radiations” symbol, which was used until the 1970s. The symbol consisted of three red segments on a yellow background with a black cross was accompanied by the words “no radiations”. The same logo appeared on the Fifty Fathoms RPGA 1 model, a calendar-based variant of the “BUND No Rad”.

These “no radiations” models remain amongst the most desirable vintage Fifty Fathoms (or indeed dive watches in general). 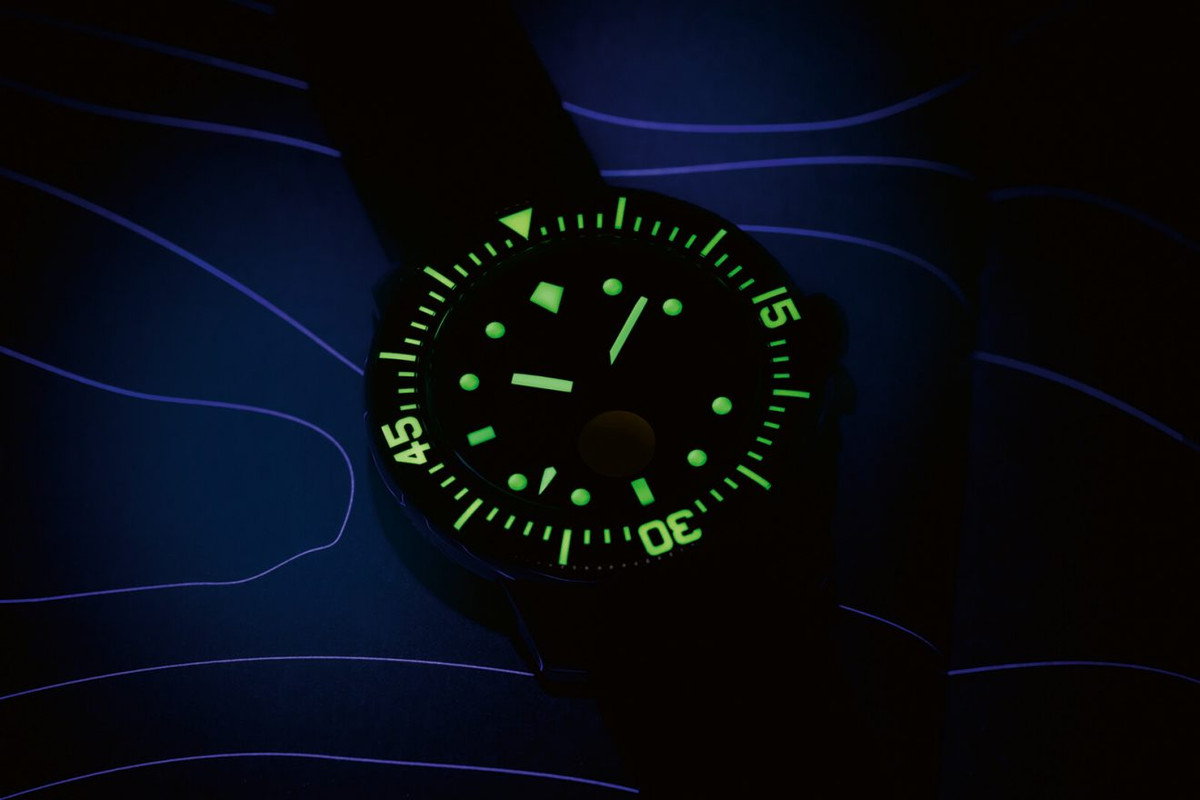 In a 40.3mm polished steel case with a water resistance of 300m, the new Tribute to Fifty Fathoms No-Rad has many of its 1960s forebears’ features. As well as the eponymous disc, it has geometrical hour markers and round dots that are from the original model, along with a diamond-shaped marker at 12 o’clock. The chapter ring, the hands and the time scale on the unidirectional bezel all feature beige faux patinated ‘old radium’-coloured Super-LumiNova. The white-framed date window at 3 o’clock echoes the RPGA-1A. A feature that is part of the Fifty Fathoms, a sapphire insert in the bezel, is also present in this new model.

At 3 o’clock sits a date aperture in a white frame, as seen on one of the 1960s models. The yellow and red “no radiations” logo remains the dominant element on the dial. The unidirectional rotating bezel, featuring a graduation typical of the initial Fifty Fathoms models, is fitted with a sapphire insert, a feature of the contemporary collection. 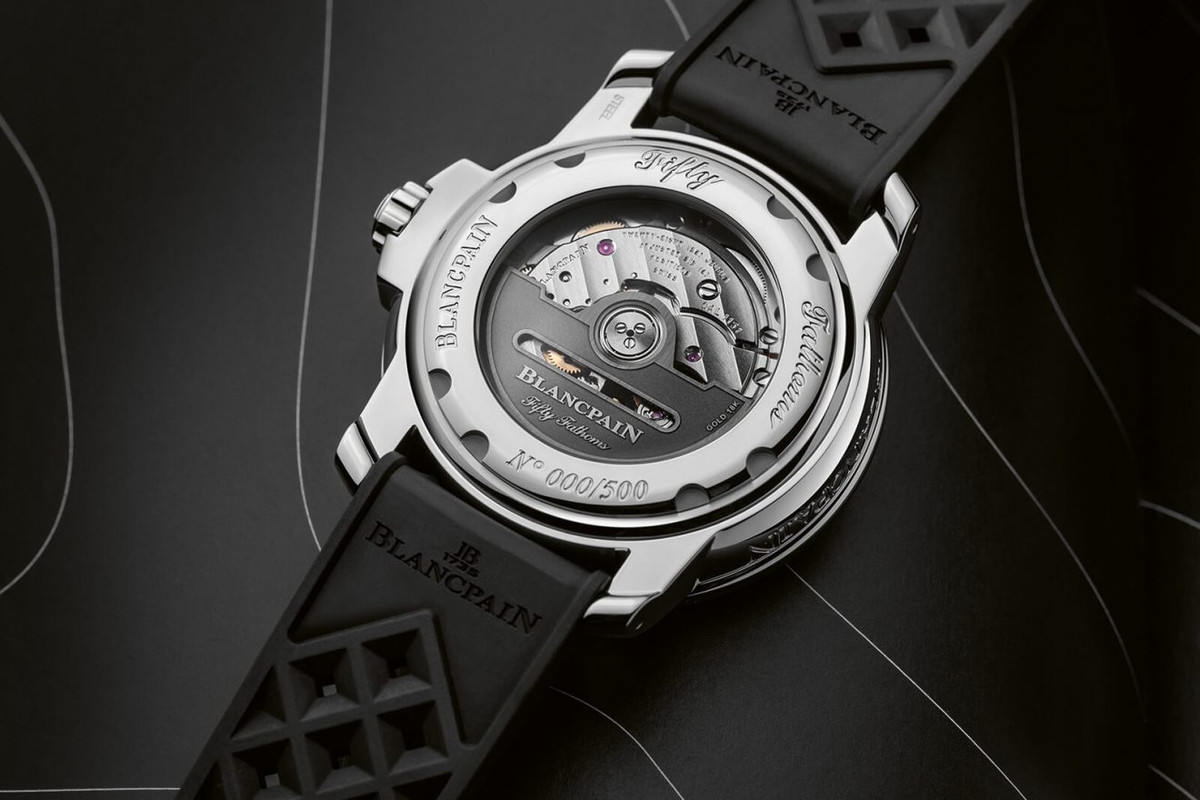 Inside is the automatic Calibre 1151 that is found in other models in the Fifty Fathoms range, including the MIL-SPEC from 2017 that was also inspired by a 1960s Fifty Fathoms. Beating at 21,600VPH, it has a four day power reserve, an NAC-coated rotor with an engraved Blancpain logo; and its balance spring made of low-density, shock-resistant, magnetism-impervious silicon. The latter feature negates the need for the soft iron inner case that protected this watch’s historical predecessors from the ill effects of magnetic fields, and has allowed Blancpain to put the finely decorated movement on display behind a clear sapphire case back.

Limited to 500 pieces, the Blancpain Tribute to Fifty Fathoms No-Rad is mounted on a “tropical” black rubber textured strap, a material chosen for diving durability. The watch is priced at EUR 13,070/ AUD 19,700. 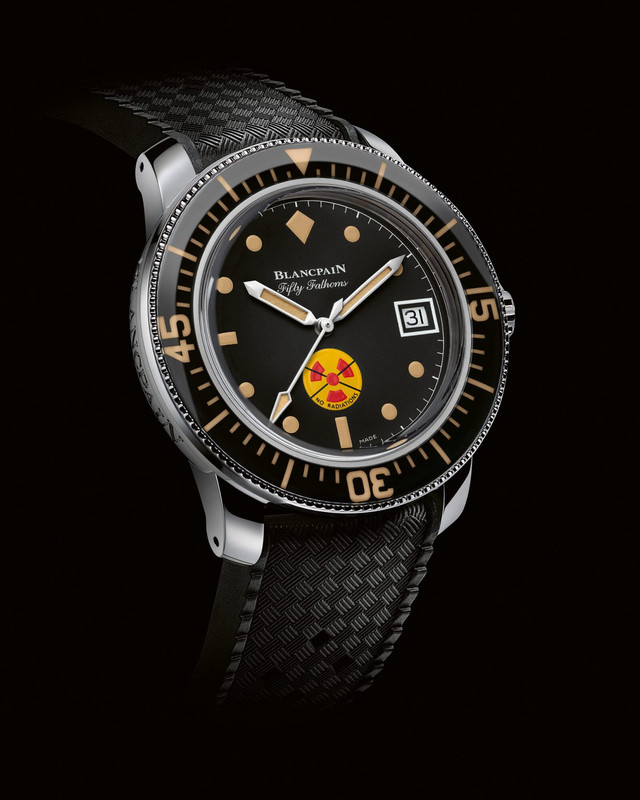 Alongside this new watch, Blancpain has also released a new two-part documentary – “Fifty Fathoms – The history as told by the pioneers who created it”. It includes archival footage, interviews with Jean-Jacques Fiechter, Rober Maloubier OBE, and Marc A. Hayek, Blancpain’s President & CEO, as well as the history of the MIL-SPEC and BUND “No Rad”. The modern Fifty Fathoms, and the brand’s Ocean Initiative plus partnership with Laurent Ballesta, both of which we have written about before, are also covered. You can view the doco at this link. For a taster, part one is below.