Although launched last year, the first Horological Machine 9 Flow, ‘Air’, only finally reached its Australian retailer The Hour Glass (Sydney) this year. Having not had our usual opportunity to see it earlier due to unexpected circumstances, the delay has meant the opportunity to think about it anew.

There is a clear design lineage and relationship between MB&F’s Legacy Machines, but their Horological Machines have often been surprises. Designed by Eric Giroud from a concept by Maximilian Büsser, in the case of the HM9 Flow it is impossible not to see the automobile and aviation-inspired lines of case and dial of the HM4 and, if one looks a bit further, a bit of the Legacy Machine 2 (LM2) in what the brand likes to call the engine. The Horological Machine No.9 was launched in two editions; the ‘Road’ with a rose-gold plated movement and speedometer-styled dial and the ‘Air’ with darkened NAC movement and aviation-styled dial. 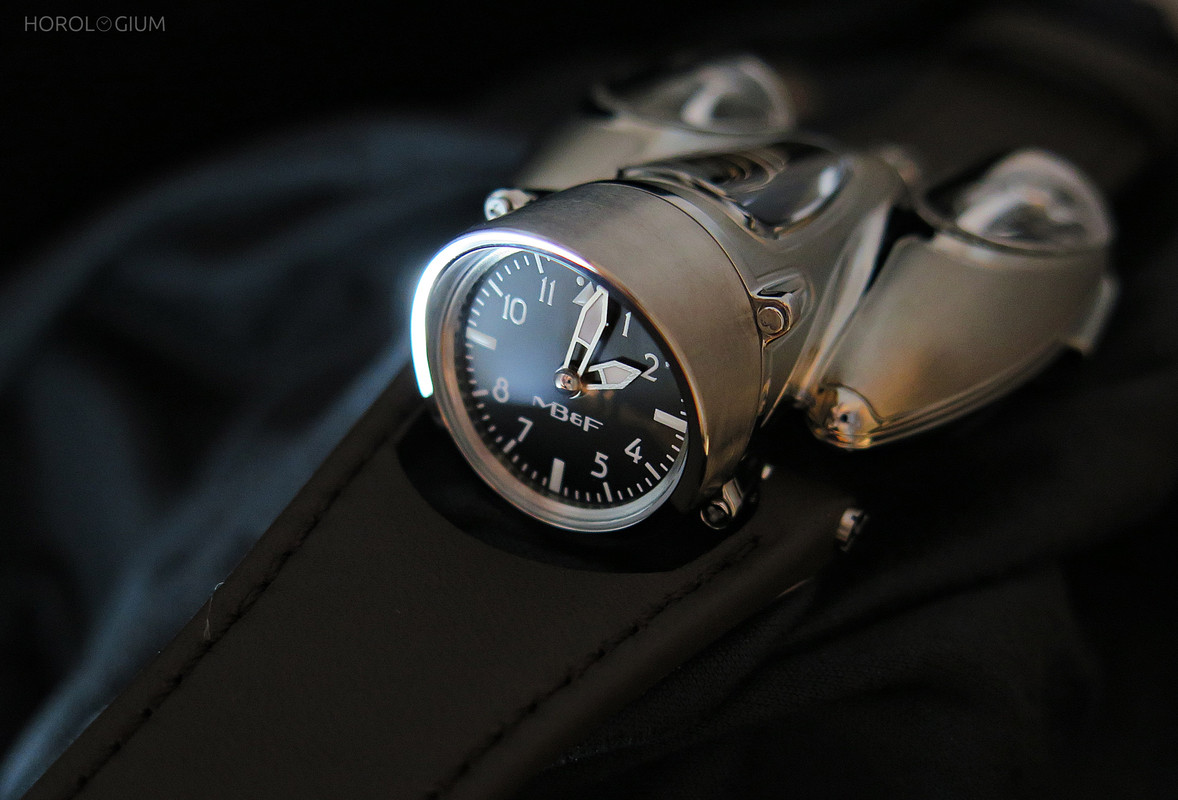 Unlike the HM4, the titanium Flow is pure curves, with a tapered conical centre wherein the hours and minutes are read from a gauge-style dial on the side of the watch, and two cones on either side. Each of these cones contains an independently beating balance wheel (each beating at 18,00VPH), visible through two of the watch’s five sapphire crystal topped openings. Their rate is balanced (averaged) out by a planetary differential that is located in the central body of the watch that averages out the two balance wheels, and is displayed at the front.

The existence of two balances beating within the same movement is where one is reminded of mechanical resonance (and hence the mention of the LM2), but in this instance they are not just separately beating but also quite separated spatially. Resonance occurs when two suspended pendulums of the same frequency swing in the same plane, and you can read about it at my post on the LM2. 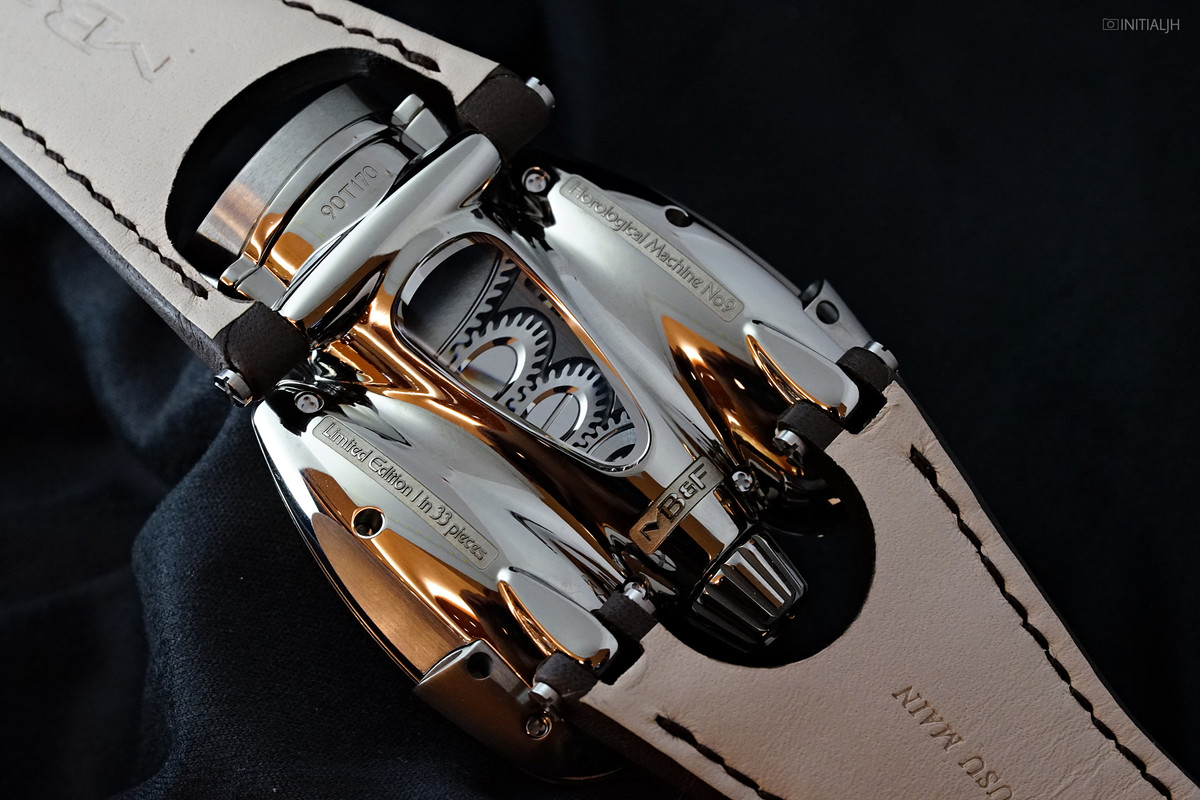 They are linked to a manually wound movement (MB&F’s fifteenth) created especially for the watch, which took three years of development to bring to fruition. One of the most notable and best things about MB&F as a brand is how for each one of their creations, the ‘Friends of the ‘F’ in their name who were involved in it, from concept to movement parts to the strap and even the writer of the text for their press releases, is named. For the HM9’s movement, it is Guillaume Thévenin of MB&F. 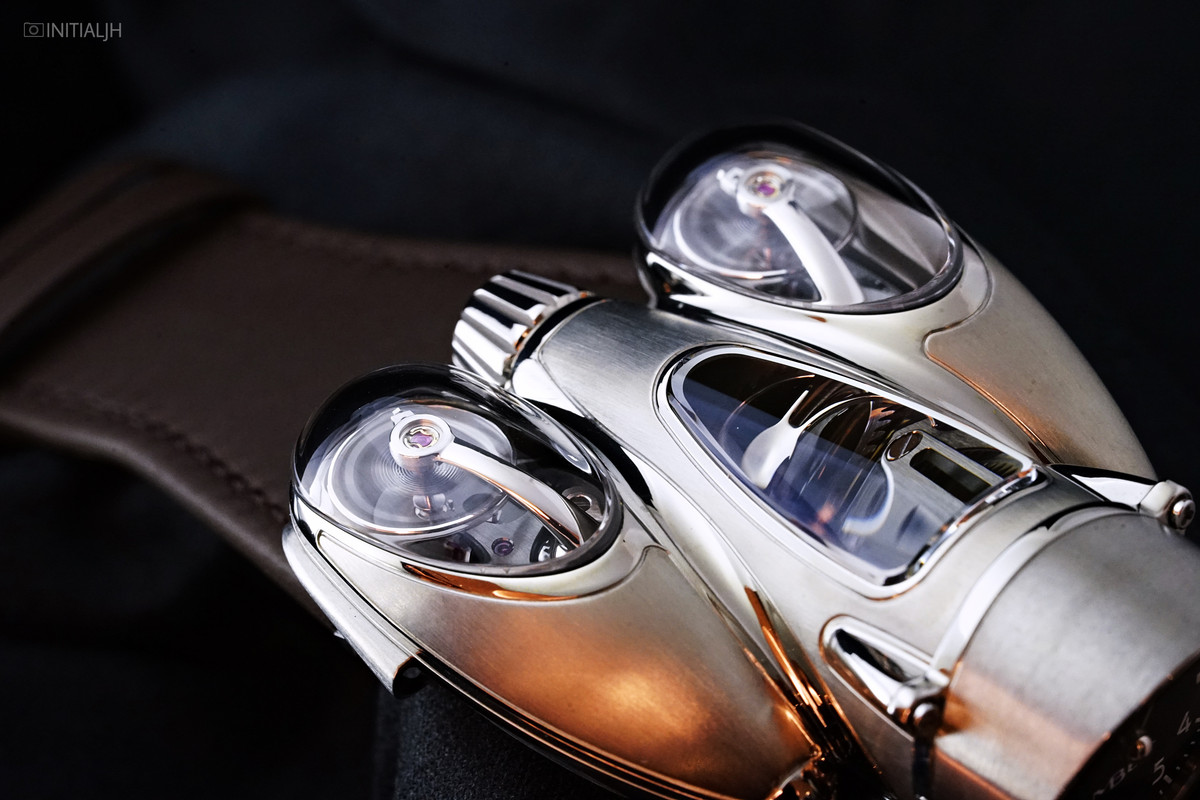 The surfaces of the HM9 Flow are mostly finished with a brushed grain, although the detailing, such as the seam lines which define the join between the side pods and fuselage, and where the two halves of the case meet, are polished, as is the underside.

The shapes and positioning of the three parts of the HM9 case required dividing the case along two axes and designing a new patented 3D gasket for water resistance (30m).

The HM9 measures 57mm in at its widest point and 47mm across, with a height of 23mm. The attachment points for the calf leather strap are on the underside of the case, and the strap is cut out around the protruding dial at one end, and the crown at the other. These numbers might seem large, but the combination of the style of lugs and how the strap is attached means that it sits snug even on a small wrist. This was perhaps one of the biggest surprises to me, how comfortably wearable it is across a range of wrist sizes.

When it was released my initial response had been that although quintessentially MB&F, with the combination of technical interest and playfulness that is central to the Horological Machines, I prefer the two watches that are its spiritual progenitors. After having spent about half an hour with it, including on my wrist, my preferences are unchanged, but what I did learn to appreciate more ‘in the metal’ than in photos was that it is a really fun watch to wear. 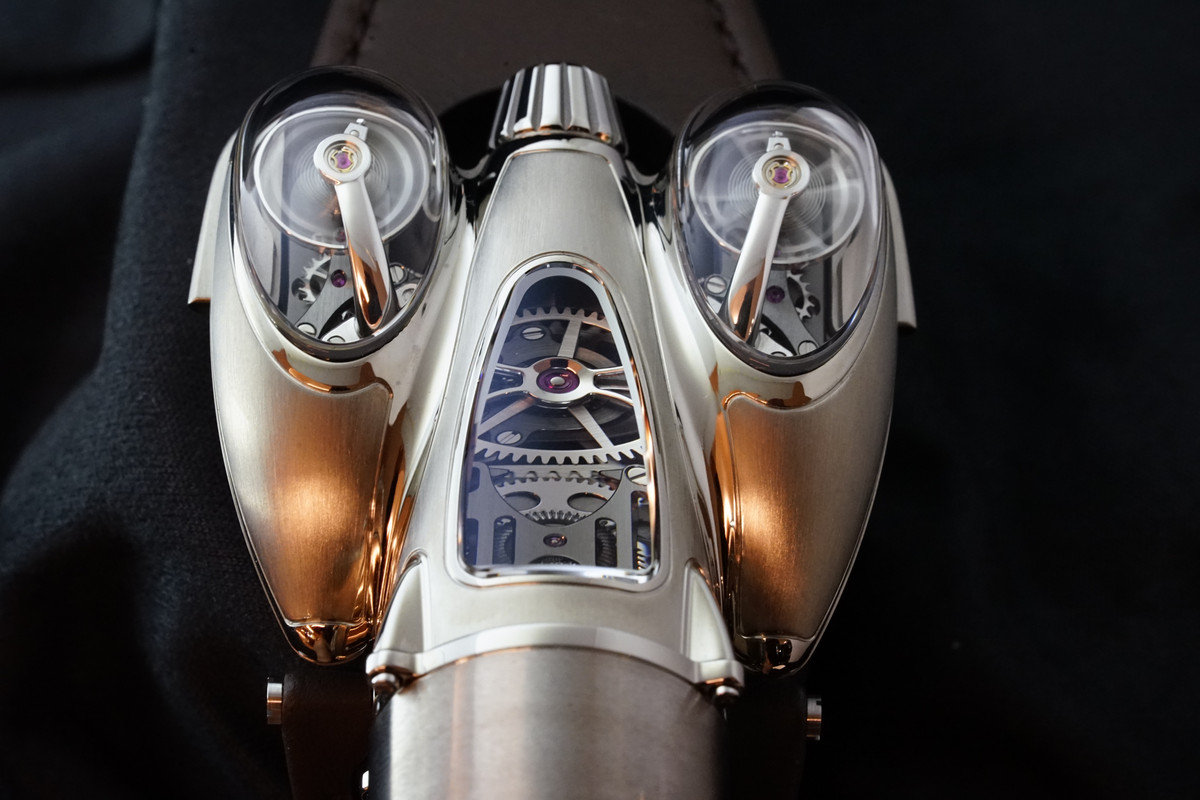 One of those present at the time was someone with no knowledge of the brand, pretty much no interest in watches, and whose presence was down to a matter of coincidence and timing. As well as it being the first time she had seen MB&F, it was also the first time she had seen a watch with such an unusual design. I should also add that her wrist is small, and though she wouldn’t wear such a large watch, it did sit unexpectedly snugly on her wrist. After an attempt by someone to explain it, I will end with her summary – “so it’s mechanical art”.

The two Flow variants each come in a limited edition of thirty-three pieces, and have an RRP of 168,000 CHF.