Two years ago Blancpain released the Tribute to Fifty Fathoms MIL-SPEC, a modern interpretation with a contemporary version of the water tightness indicator. This feature was present in the MIL-SPEC 1 (MILitary SPECification) model of 1957-58. It was based on Blancpain’s then head Jean Jacques Fiechter’s incorporation of something he deemed a safety necessity for divers – a circular water-tightness indicator that would change from white to red as a warning if liquid was leaking into the watch case.

So now we come to the present.

Blancpain has launched two new additions to their Fifty Fathoms collection based on models from the 1950s to 1960s period which also pay direct homage to the military history of the watch.

The first of these watches is the “Nageurs de Combat” tribute, a three hundred piece edition in honour of the French combat swimmers for whom Blancpain made he first Fifty Fathoms watch. This elite Navy team was created in 1952 and headed by Captain Bob Maloubier, with their missions including underwater intelligence, sabotage operations and clandestine port attacks.

As it was still early days for such underwater diving, the new team had to design their diving equipment from scratch. They were given a watch, but it was not to Maloubier’s satisfaction, so in conjunction with Lieutenant Claude Riffaud, he set about designing a better one. Their design was first submitted to Lip, whose response was that his design was “a portable clock without any future”. Maloubier and Riffaud convinced Jehan-Jacques Fiechter at Blancpain, himself a keen diver, to produce it, and named it the ‘Fifty Fathoms’ after the unit used as a depth measurement (one fathom corresponding to 1.829m and fifty fathoms, 91.45m, the depth that at the time, could be reached with traditional diving equipment).

The final Fifty Fathoms that went into production (and one of many variants to come) was not the exact design that Maloubier and Riffaud had presented, as Fiechter used his own diving experience to make some adaptations. These included a screw-down case back with a double ‘O-ring’ system, and a humidity indicator at 6 o’clock (blue if the air in the case was dry, pink if water had penetrated the watch case) to which the 2017 model to which I referred in at the outset, is a nod. 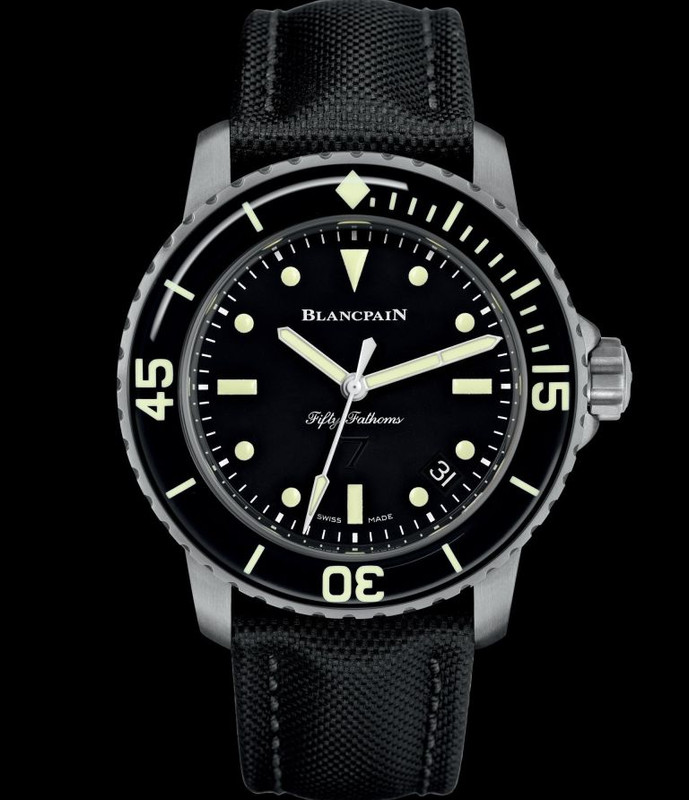 Today’s new version has some distinct design nods to the original. Its unidirectional bezel is topped with the signature diamond mark, the matte black dial has lumed triangular (a nod to the original), circular, and rectangular hour markers, and the hands are straight sword-style, with a slim arrow seconds hand.

An unexpected feature is situated just above the 6 o’clock hour marker. The black number ‘7’ printed on the dial is a reference to the maximum depth of 7m that the navy frogmen can reach on pure oxygen.

The stainless steel case size is still 45mm with a water resistance of 300m. 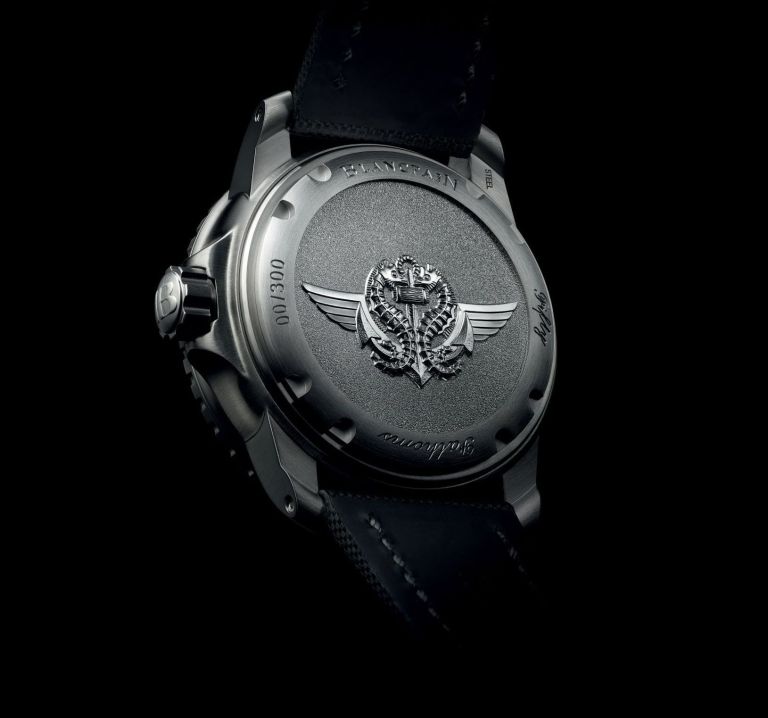 Underneath this decorated case back is Blancpain’s automatic Calibre 1315, beating at 28,800VPH with a power reserve of five days.

The 2017 MIL-SPEC Fifty Fathoms came in a 40mm sized case. If you missed out on that one and are looking for a simple clean heritage-inspired version in this bigger size, the Fifty Fathoms Naguers de Combat should have an RRP of around the 14,000 CHF mark.

The second of the two new models is the Fifty Fathoms Barakuda re-edition, which is limited to five hundred pieces. This piece is inspired by a Fifty Fathoms model that was supplied to the German military (Bunesmarine) in the late 1960s/ early 1970s via Barakuda, a diving equipment distributor, although some also went to the Polish Navy, and are so marked. 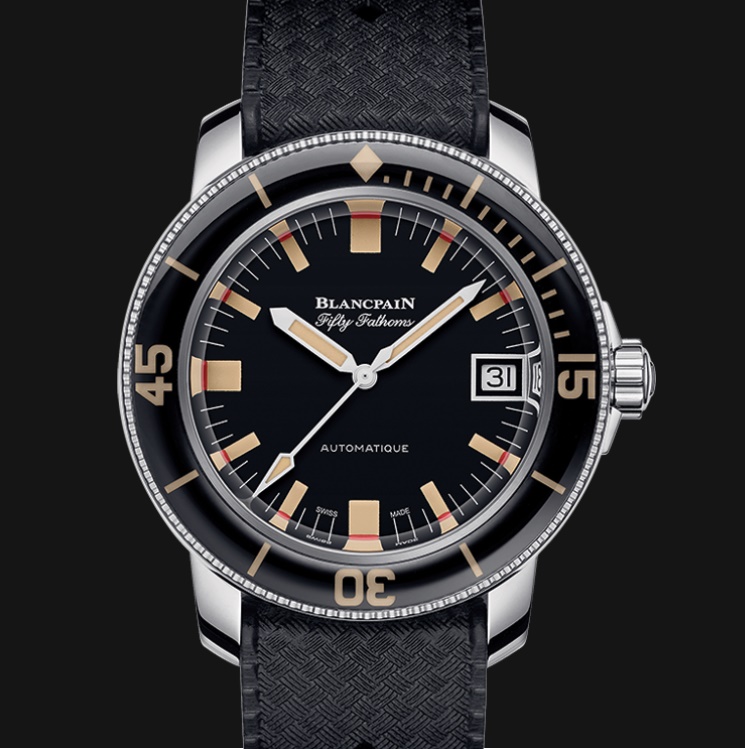 The original watch was 41mm and this one comes in a 40mm steel case, with 300m water resistance. This new homage comes with a uni-directional bezel, as compared to the bidirectional of the original.

In terms of its looks, it’s a pretty faithful (with some modern tweaks) tribute, with a black dial, rectangular markers for the hours (although slightly longer) that echo the two-tone hour markers of old. The original colours of red and white are now in the form of red and a colour they are calling “old radium” SuperLumiNova to replicate the original look. The hands have white lume.

The sapphire crystal bezel has the old diamond-shaped marker at 12 o’clock and the same scale as other modern the Fifty Fathoms, but again in “old radium” lume to match the dial.

Like the original, and unlike the Naguers de Combat homage model, the date window is at 3 o’clock. For those who like me have date window preferences, this is welcomed. 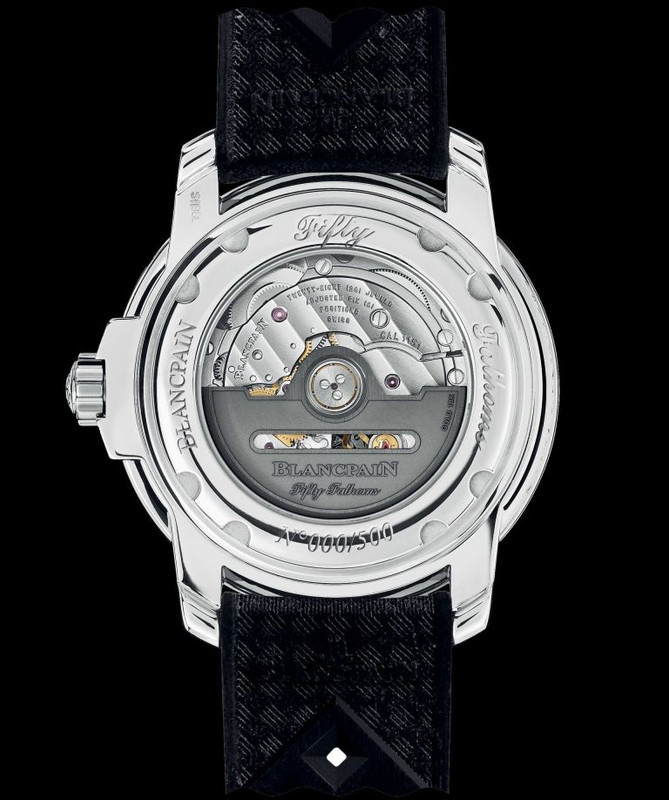 Coming on a black tropical-style rubber strap as per the original model, this attractive (and nicely sized) tribute Fifty Fathoms Barakuda (and my pick of the two new models, although I’d prefer a closed case back) has an RRP of 14,500 CHF.

As I mentioned earlier, if you want to read a bit about the origins of the Fifty Fathoms, you can do so at this previous post on a rare vintage model.