Chronoswiss has returned to Australia courtesy of Fairfax & Roberts, who are expanding their watch offerings following the introduction of Schwarz Etienne. As it has been a number of years since they were last here, a new generation of local watch enthusiasts has not had much exposure to the brand and its emblematic regulateur, so today we are looking at their Flying Regulator Open Gear. For those whoaa are familiar with Chronoswiss but not noticed, yes there was a change from ‘Régulateur’ to ‘Regulator’ in the interim.

This year marks thirty-five years since the brand was founded, and the Chronoswiss Flying Regulator Open Gear, a modern much more visually bold take on their ‘calling card’ (as it were) of classically designed regulators (itself thirty years old) has been their focus in 2018.

Rather than being a flat dial, the regulator dial is layered, with each sub dial on its own level. The respective scales on the seconds and minutes sub dials are sloped rings. The base dial is also the surface onto which the train wheel bridges of the skeletonised gears are fixed via thermally blued screws. 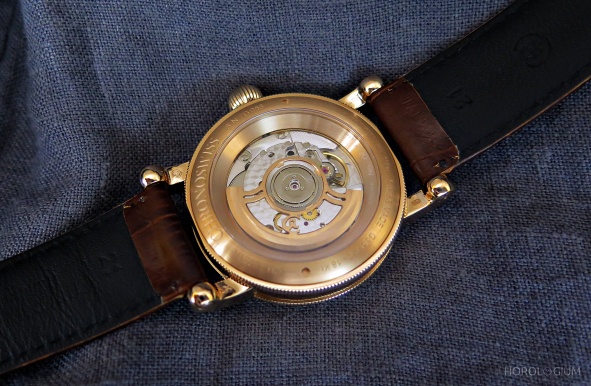 The Chronoswiss Flying Regulator Open Gear is powered by the automatic Calibre C.299 (base ETA 2895), beating at 28,800VPH and with a power reserve of forty-two hours. While the base movement is out-sourced, the 37 individual parts of the dial module are manufactured at Chronoswiss’ ‘Atelier Lucerne’.

The regular production model of the Flying Regulator Open Gear comes in stainless steel, with either a black, blue or silver galvanic dials, as well as in an 18 carat red gold version with a galvanic silver dial. However, as you can see, there are also special anniversary limited editions of thirty-five pieces each in stainless steel or 18 carat red gold, which have guilloché dials; blue for the gold version, and silver for the steel.

All of the variants are in 41mm sized cases with the familiar onion crown that is an core feature of Chronoswiss watches.

Of these two that I saw, the non anniversary model was actually my favourite. It also comes, as mentioned, in a stainless steel case. To me, the contrast between the classical looking silvery dial with the blued notes and the contemporary dial architecture seems to encapsulate the idea of Chronoswiss modernising their regulator.

The Flying Regulator Open Gear has a starting RRP of € 6,380.