Home › Hands-on › HYT : an Australian arrival and the H1 Iceberg 2

HYT : an Australian arrival and the H1 Iceberg 2

In 2012 HYT burst into the watch industry with the H1, an attention-grabbing and incredibly innovative watch that truly was unlike anything that people had seen before. It was rapidly followed in succession by the H2 in 2013.Unmistakably 21st century in their looks but in their own way, a modern invention of an age-old idea of using bellows, HYT’s watches have managed to not just survive during what is a difficult period for the luxury watch industry, but to also grow and expand, now into Australia.

If you had asked me back then whether HYT would be here within such a short period of time I’d have said that perhaps it might take a few more years, but the as ever unexpected MAD Associates and Nick Hooper have taken the literal plunge, with its launch in Australia done on the waters of Sydney Harbour and with HYT’s sponsorship of Team Alinghi playing an important part of its local introduction. 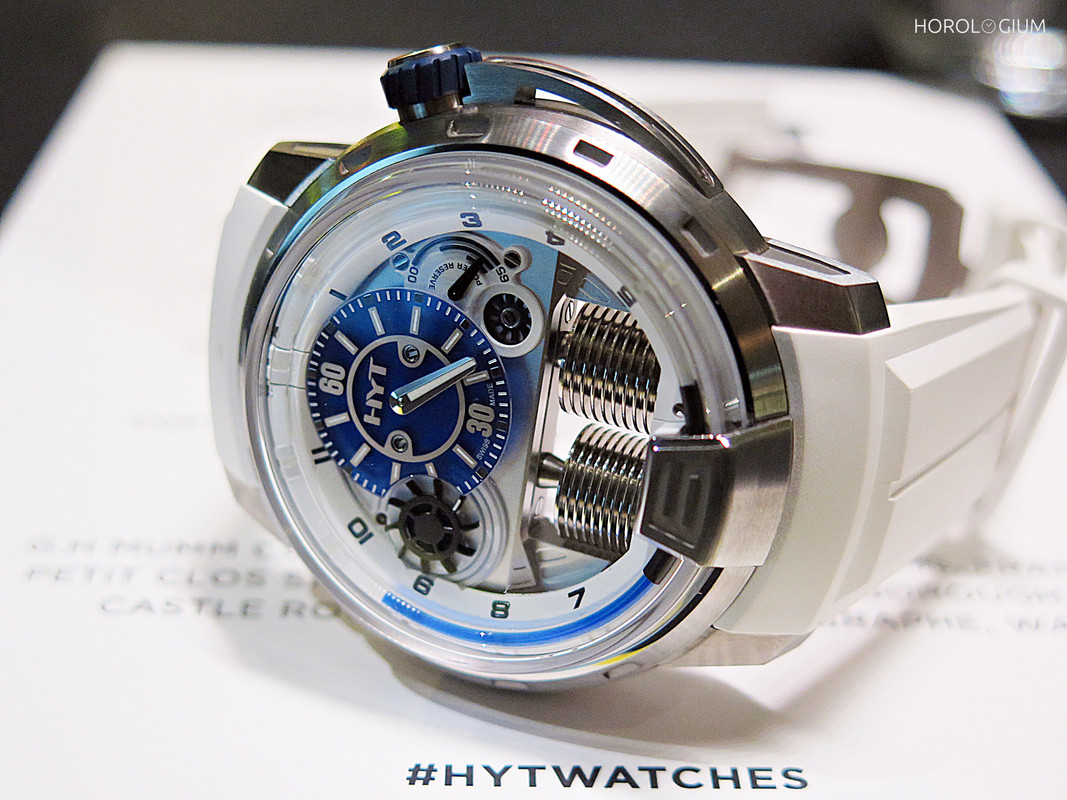 With the Sydney summer in full flow for HYT’s Australia launch, what better watch to share today than a 2016 release that seems perfectly suited to Australia at this time of the year – the H1 Iceberg 2, a follow-on from the Iceberg 1 released in 2014, but with more blue. Intended to represent the blue of the seas and the white of the clouds, this is a limited edition of just fifty pieces.

In a 48.8mm titanium case with a thickness of 17.9mm, it is a watch that the more time I spent with it the more I found myself liking it. The case has a combination of brushed, satin-finished and shot-peened finishing. It is large, but because of the use of titanium, sits lightly. It also sits smaller than 48.8mm, for those unfamiliar with HYT cases, perhaps closer to some 46mm watches in fact. In any event it didn’t feel its measured size when I wore it. 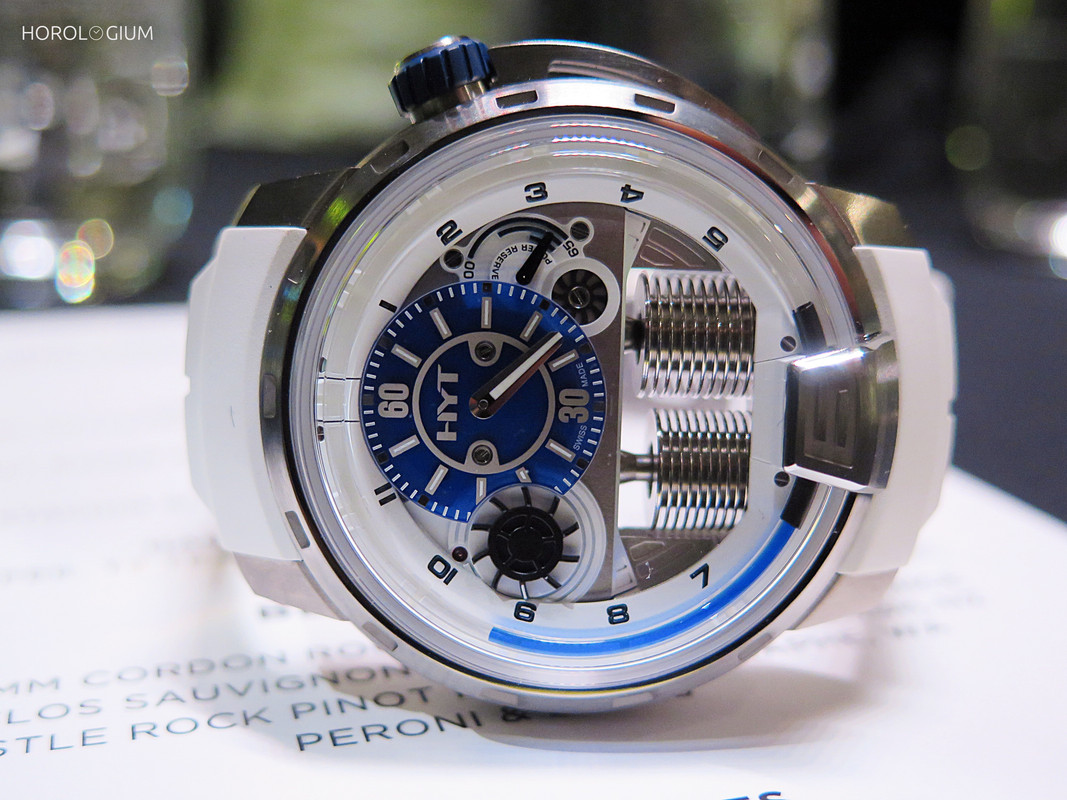 As well as the retrograde blue fluid hours, the Iceberg 2 is most characterised by its blue Grand Feu enamel minute dial, a nod to traditional watchmaking that although seemingly contradictory with the hi-tech nature of the rest of the watch, actually really works, in large part because of the boldness of the blue. Both hour markers and minute hand are lumed.

As per the H1 Iceberg 1, the Iceberg 2 features a small seconds wheel at 9 o’clock and a 65-hour power reserve indicator between 2 and 3 o’clock. It also has a blue screw-down rubber clad crown. 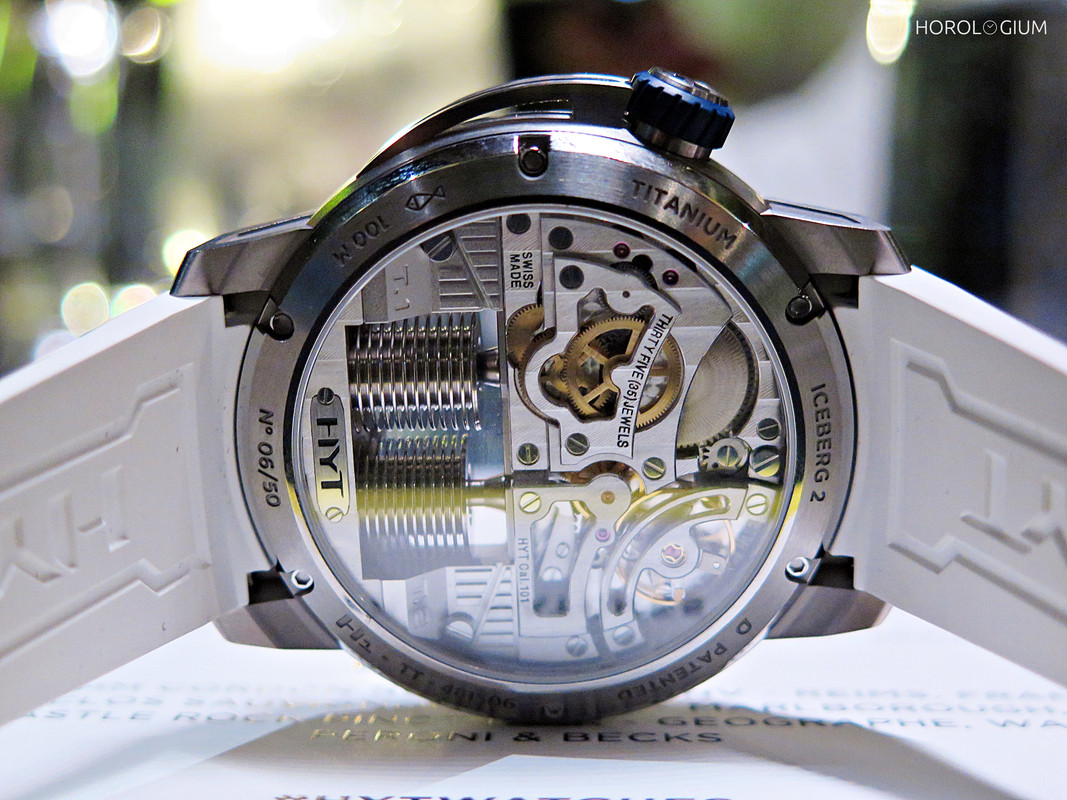 Inside is the manual-wind HYT Calibre 101 which is visible through the open case back, which beats at 28,800 VPH. Bridges are hand-chamfered and adorned with côtes de Genève, and the famous bellows are rhodiumed.

As seems quite natural for a watch that looks like this, it comes on a white rubber strap with a titanium deployant buckle, although a white calf strap is available on request. For regular use most would probably stick with the rubber, although swapping it to a calf strap for night time wear to dress it up sounds like a good option to me.

I know this is a large watch of a size normally worn by men, but having seen a variety of HYTs worn on women’s watches over the hours that I spent with the HYT, and in light of its lightness, I can definitely say that it is a watch that can be worn by male and female wrists.

Like Loading...
‹ ON THE WRIST : Ulysse Nardin Executive Dual Time
ZENITH : the battle of the fusée and chains ›