Romain Jerome’s adventures with old computer games continued late last year with their release, following on from the Pac-Man and Space Invaders models, the Super Mario limited edition, commemorating the 30th anniversary of the game’s release. For those familiar with the previous models the look of this one will not be strange to you.

Nostalgia as a driver for watch design is a common thing, whether this be nostalgia for models of times past which are re-imagined or simply reissued, or for something significant in the life of someone behind the brand. For those who wonder at the high price of this type of nostalgia, well these watches probably aren’t going to be aimed at you, but in watching the faces of those to whom the Super Mario Bros watch IS aimed, it is clearly a successful idea.

Besides which it’s all rather fun.

The dial looks pixellated and has is created using three layers to give it the depth to achieve this look. The multi-layers also mean that the dial looks slightly different according to how the light falls on it. As a mechanism for realising pixels on a watch dial, it’s pretty much on the money; it does look as though the brightly coloured characters etc, which are appliques hand-painted in cold enamel, have jumped off the screen onto this watch.

Inside the familiar 46mm ‘Moon Invader’ PVDd titanium case is the automatic RJ001-A movement with a 42-hour power reserve but the movement is really in some ways, just the background vehicle for this watch. 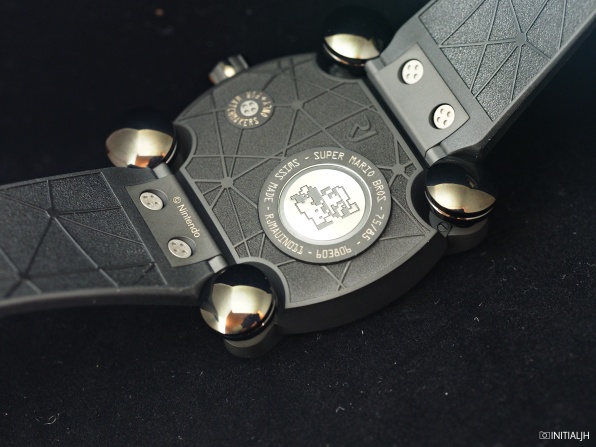 On the back is a commemorative madeallion and for those interested in such things, the case has a single screw for ease of access for watchmakers.

To mark the 30th anniversary in 2015 this watch has been released in a limited edition of 85 pieces. For this bit of nostalgia you will have to pay CHF 15,555.