Released at Watches & Wonders 2015, Piaget’s Secrets & Lights collection is an in-house project between Piaget’s Haute Joaillerie and Haute Horlogerie departments. This collection is inspired by what they are calling a ‘mythical journey’, with a focus on the route from Samarkand to Venice, both cities that are renowned for a rich artistic and architectural histories.

We shall feature some of the other pieces from the Secrets & Light Collection but today it is about a planisphere map model called the Emperador Coussin XL Large Moon Enamel watch, which also comes in a gem-set version. 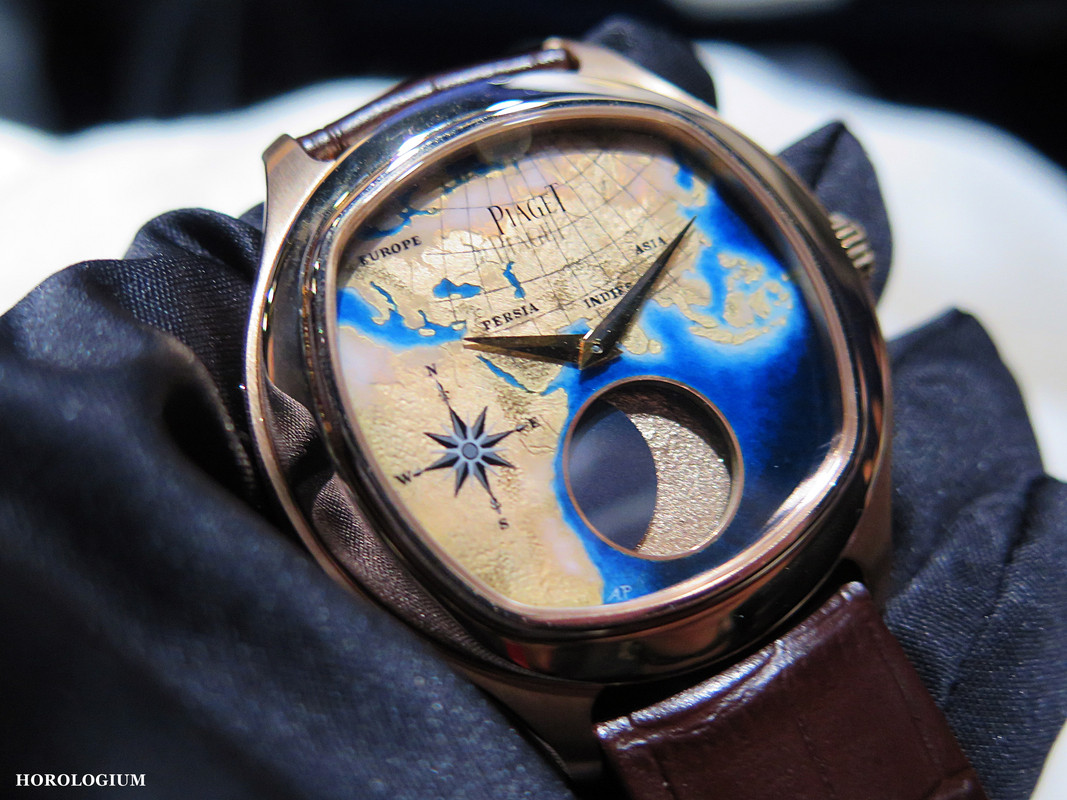 Featuring the skills of the renowned Anita Porchet, this dial is gold, and features the use of hand-engraving and champlevé enamel work to depict the Silk Road area covered in Piaget’s ‘Mythical Journey’. You will notice that the depictions of land mass is not smooth; this topographical approach, with land shown in relief, is particularly stunning, showing off immense skill and patience. It would have been far easier to just have it all flat. 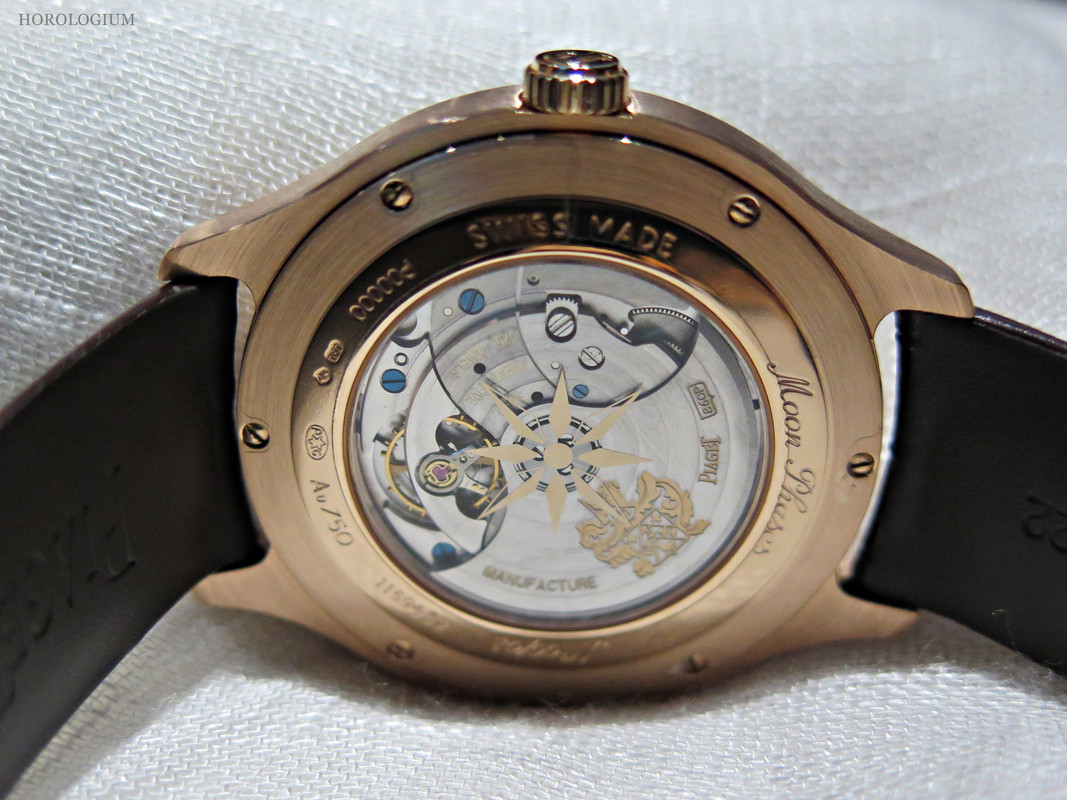 The watch is a fairly largely sized 46.5mm (hence its ‘XL’ name) 18 carat pink gold case; perhaps it is more for those whose idea of a dress watch is not necessarily svelte. Inside is the automatic Piaget Calibre 860P movement with a 72-hour power reserve and 21,600 VPH. This movement was especially designed to power the large moon phase at 6 o’clock. The moon phase indication is designed to be a simple representation – the yellow moon disc is gradually revealed or obscured by a dark blue ‘mask’, to reflect how a moon waxes and wanes to the eye. The coarse granular look of the moon disc provides a nice contrast to the blue disc. 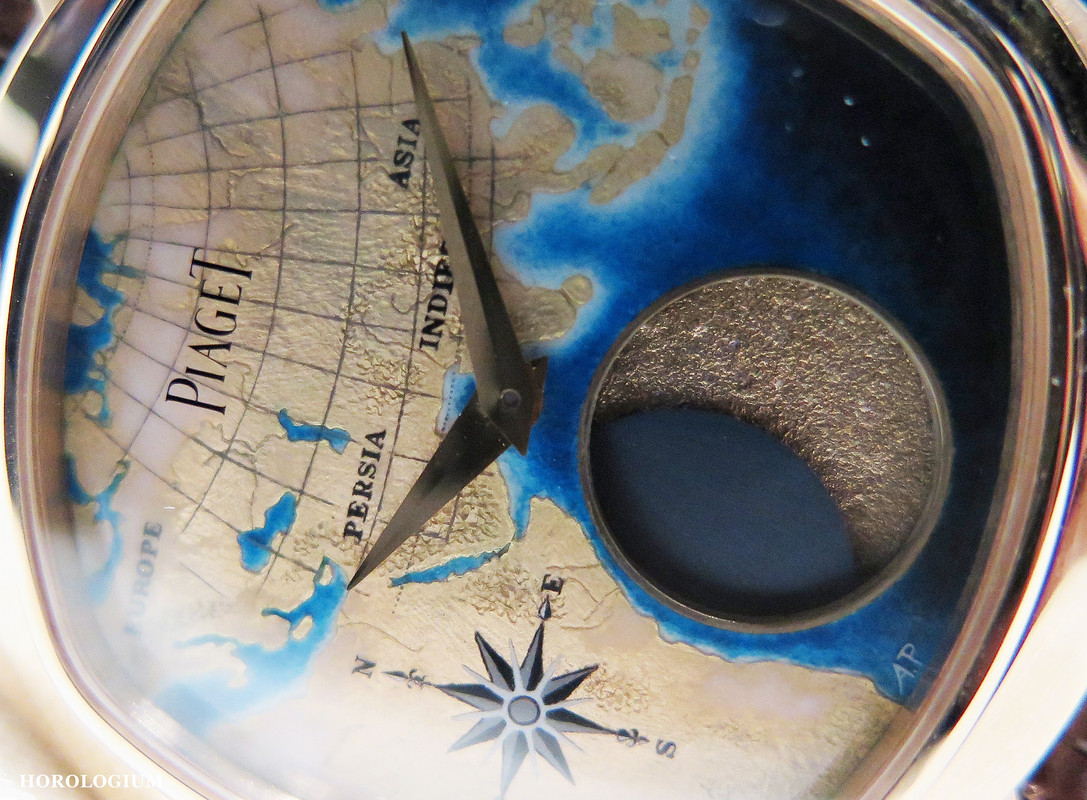 This is a very striking watch and yet another example of the rather beautiful dials that Piaget creates. They may be more widely known for its ultra-thin pieces but their dedication to dial artistry deserves more appreciation. For example at Watches & Wonders 2014 there was this simply stunning scrimshaw dial, and the delicacy of embroidery on a dial as well.

The Emperador Coussin XL Large Moon Enamel comes on a brown alligator leather strap with a matching pink gold folding clasp. As mentioned above, there is also a gem-set variant. It has 160 brilliant-cut diamonds (approx 1.4cts).