Home › chronograph › PHOTOS : Omega’s White Side of the Moon

PHOTOS : Omega’s White Side of the Moon

Two years ago the Omega Speedmaster went to the ‘Dark Side of the Moon’ and last year, it went grey with a lunar dust theme. At Baselworld 2015 they launched their latest/ last ‘Side of’ variant the ‘White Side of the Moon’, which I described at the time as ‘The Dark Side x Alaska Project’ but which Omega somewhat more poetically describes as reflecting lunar radiance.

At any rate it’s white.

In fact it is even more white ‘in the ceramic’ than it is in photos, as I discovered during the Sydney launch of some of this year’s new models.

It is also very shiny. 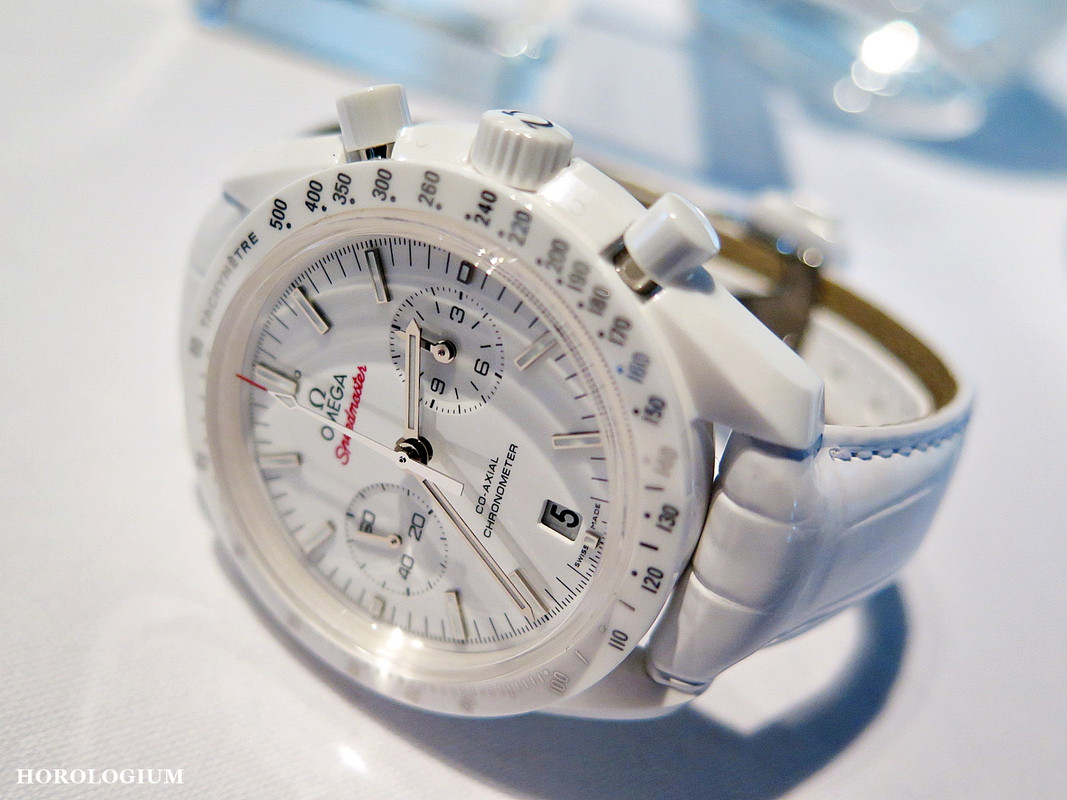 Their third Speedmaster ceramic model, the White Side has a dial and brushed and polished case made from zirconium oxide ceramic. The polished white ceramic bezel has a matte chromium nitride tachymeter scale. The polished ceramic pushers on the case function independently so there is no risk to the chronograph mechanisms as a result of inadvertent manipulation.

The scratch-resistant sapphire crystal, treated with an anti-reflective coating on both sides, protects the dial with its 18K white gold hands and applied indexes. The centre chronograph seconds hand is rhodium-plated and with a red tip. The hour, minute and chronograph seconds hands, indices and two dots at 12 o’clock all have white Super-LumiNova. Engraved just above the centre of the dial is “ZrO2” as a nod to its material. There is a small white sub-dial at 3 o’clock that serves as a 60-minute and 12-hour recorder and a small second sub-dial can be found at 9 o’clock.

The Speedmaster White Side of the Moon comes on a rather shiny white leather strap with a white ceramic and Grade 5 titanium clasp. 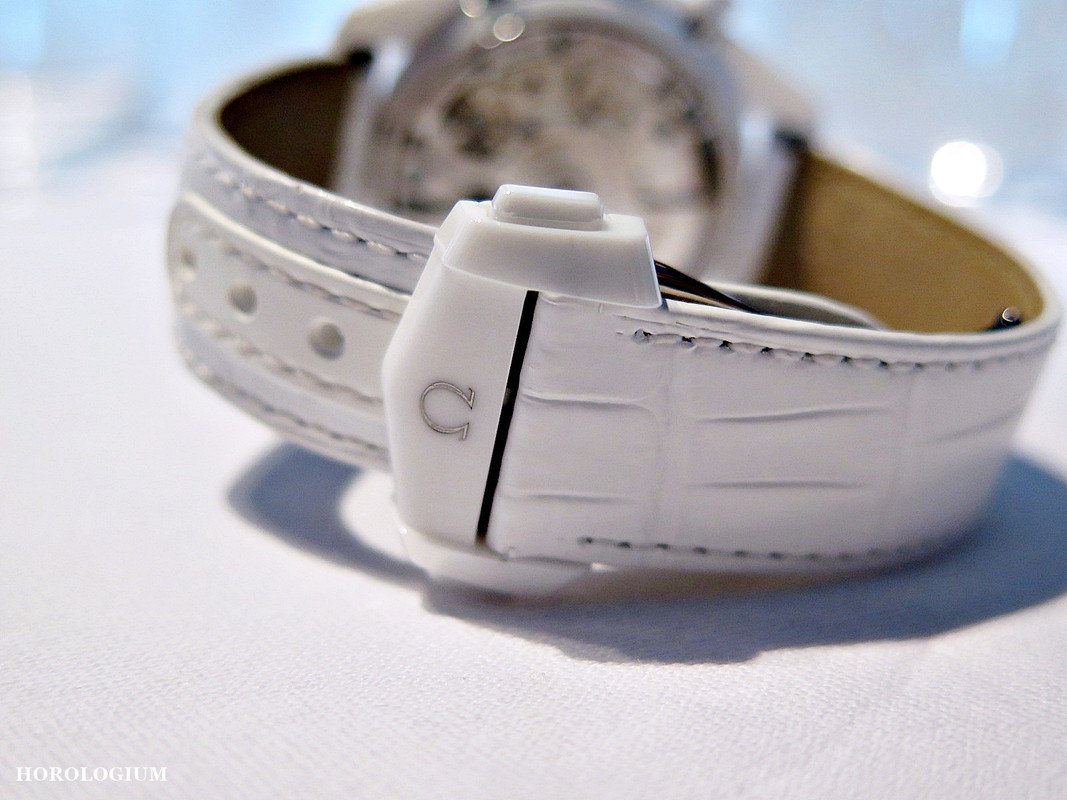 The white ceramic case back is polished with bevelled scratch-resistant sapphire crystal, matte chromium nitride marks, and is engraved with the name of the watch: “White Side of the Moon”. Inside is the Co-Axial Calibre 9300 that was in the other ‘Sides’, COSC-certified and with a 60-hour power reserve. A handy thing about the movement is that there is an independently adjustable hour hand.

It’s 44.25mm in diametre and has a bi-compax layout like the Dark and Grey Sides. This format, as opposed to the original tri-compax dial, was first used on the Speedmaster Co-Axial Chronograph that was Omega’s first Speedy to use their in-house Co-Axial Calibre 9300 movement. As per that model, the sub dial at 3 o’clock for this new model is both 12-hour and 60-minute counters; it has two stacked hands, the longer one counting 60 minutes, the shorter 12 hours. The small seconds sub dial is at 9 o’clock. 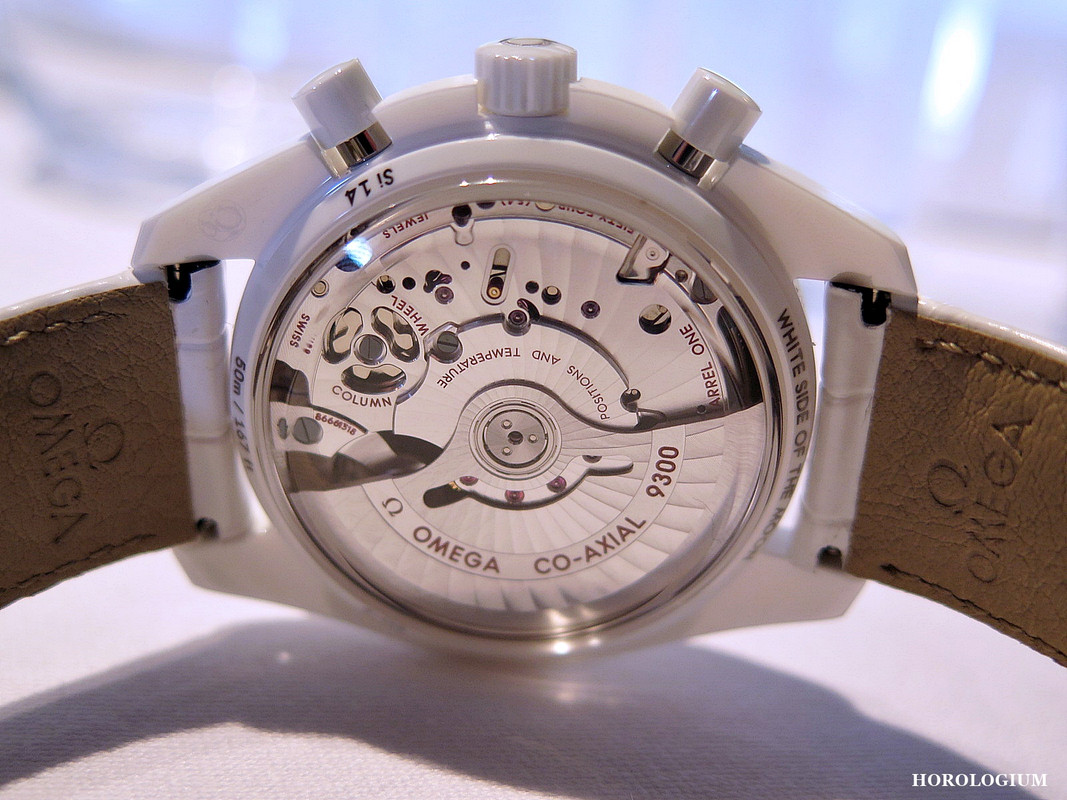 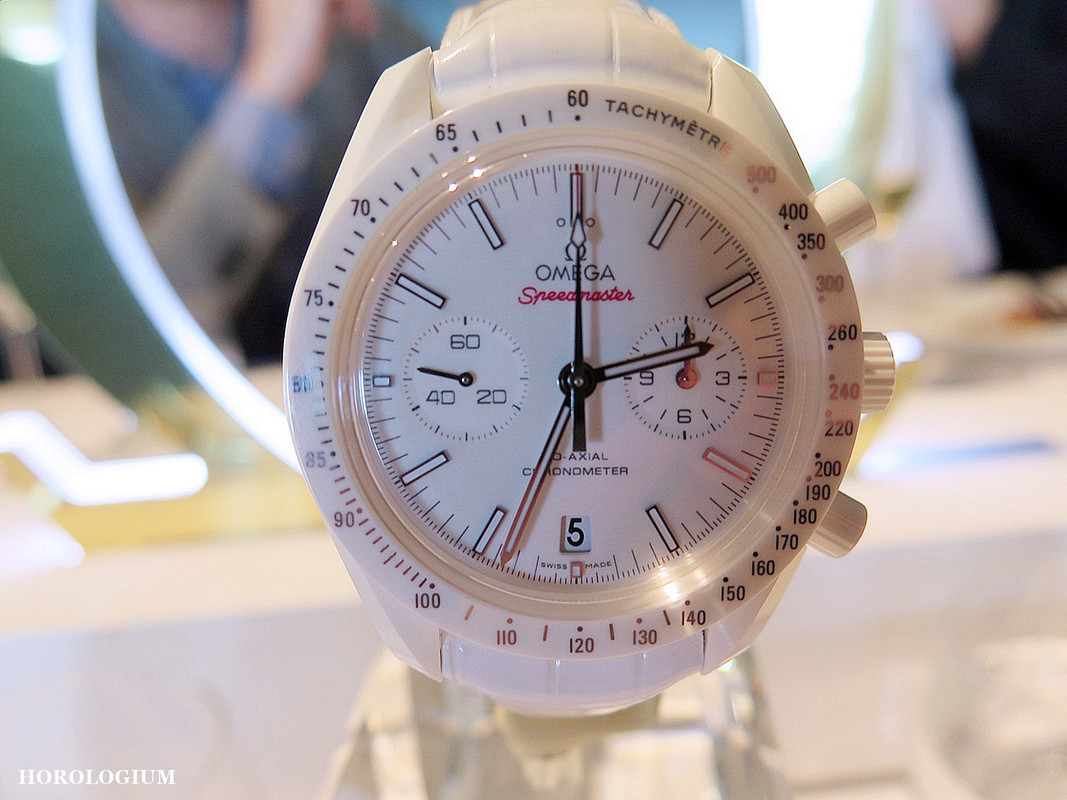 There have been a lot of Speedmaster models. In terms of the three coloured ‘Sides’ my vote is definitely still first with the Dark Side. The Grey Side was actually more attractive than I had expected it to be, but this white one feels less ‘tool watch’ and more ‘Statement Speedmaster’. Perhaps I am conservative, but the White Side of the Moon feels like a Speedmaster (and I am distinguishing it from other ‘all-white’ watches because to me, Speedys fall into a category of their own) that perhaps isn’t so much for traditionalists as for people who may not have previously taken to it but who are engaged by the ‘moon watch’ idea and like bold, shiny watches.