Known for their traditionally styled ‘observer’ watches, including a special limited eition model in 2012 named after their founder, Glashütte Original have released a new version of their Senator Observer, containing the same Calibre 100-14 as the Julius Assmann LE mentioned in the link.

For those who are unfamiliar with this style of watch, observation watches, also known as ‘deck watches’, were used by navigation officers in conjunction with marine chronometers and other instruments to determine as precisely as possible a ship’s position at sea.

This newly announced model is in a polished and satin-brushed stainless steel 44mm case with a thickness of 12mm. It has an open caseback through which you can see the automatic Calibre 100-14 with a three-quarter plate with a striped finish, and a 21 carat gold oscillating weight.

Functions apart from the time are an off-centre small seconds, date, and a (55-hour) power reserve indicator. 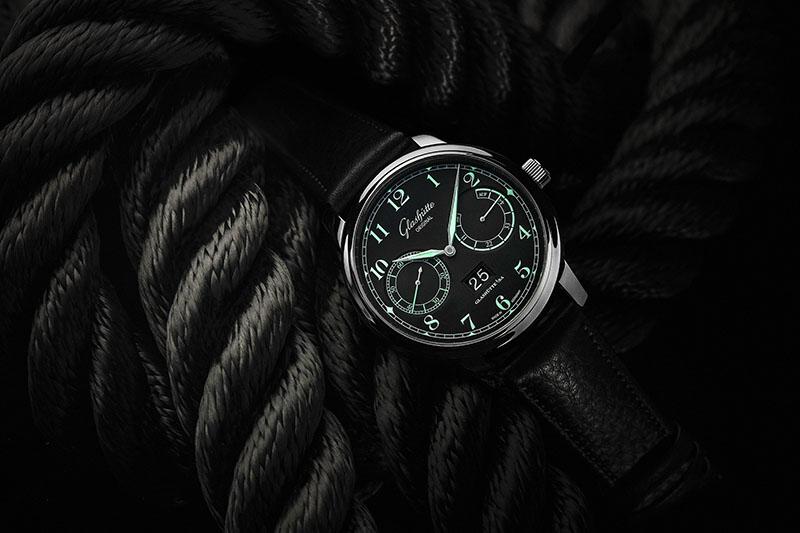 Interestingly, the hour and minute hands are white gold, but applied with SuperLumiNova, as are the Arabic numerals, chapter ring hour indices, and the hands and indices of the seconds sub dial and power reserve indicator.

It will be available either on a black calfskin strap or a polished stainless steel link bracelet.

The Senator Observer has a water resistance of 50m, which probably means that it can withstand a few on-deck saltwater splashes during misadventures on the high seas.