As a ‘follow-up’ of sorts to the ‘jump hour’ post, today Horologium looks at another type of uncommon time display, two Cartier ‘mysterieuse’ models released this year. Cartier is famed for its long term commitment to mystery clocks and watches, which has mostly been through the use of hands that float on the dial, but these two new models, part of their ‘fine watchmaking’ oeuvre, includes both one of these more traditional mystery models and a rather more complicated one.

The first is the more traditional Rotonde de Cartier Mystery, the more traditional of the two. It is available in white or rose gold in a 42mm Rotonde case of a height of 11.6mm. It has a distinctly and typically Cartier dial with white guilloché, silvered openwork grid with sunray effect, and transferred Roman numerals. 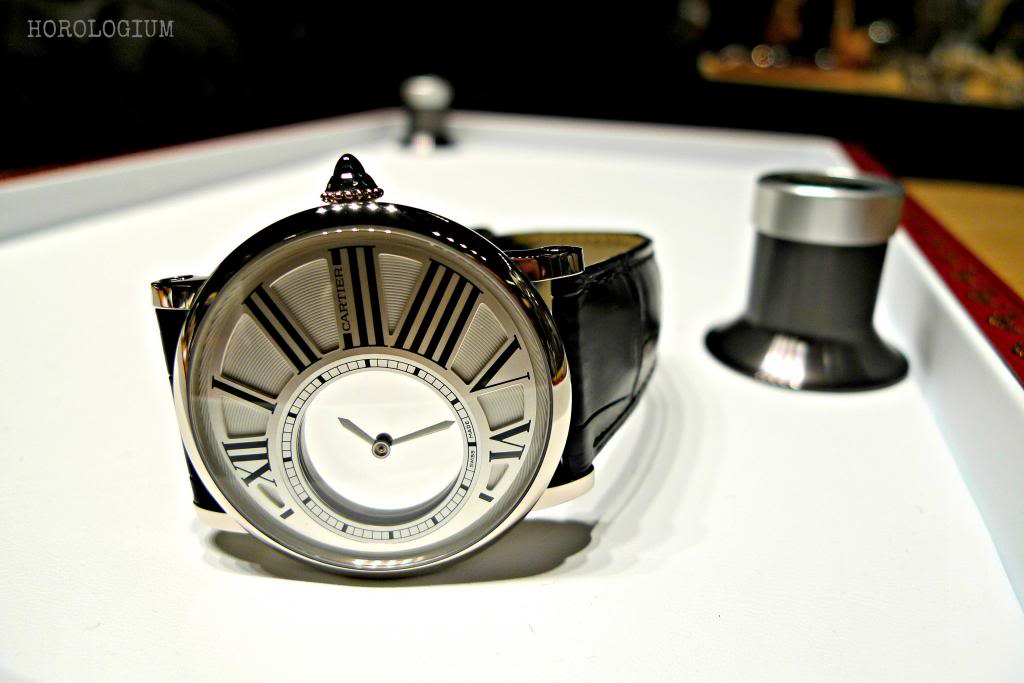 The hands are sword-shaped rhodium-coated, floating in their ‘mysterious’ way mounted on two transparent sapphire crystals. Inside of the Rotonde Mystery is an in-house made caliber 9981 MC manually wound movement with a power reserve of 48 hours. You can see the movement in its entirety through the (naturally) open case back. 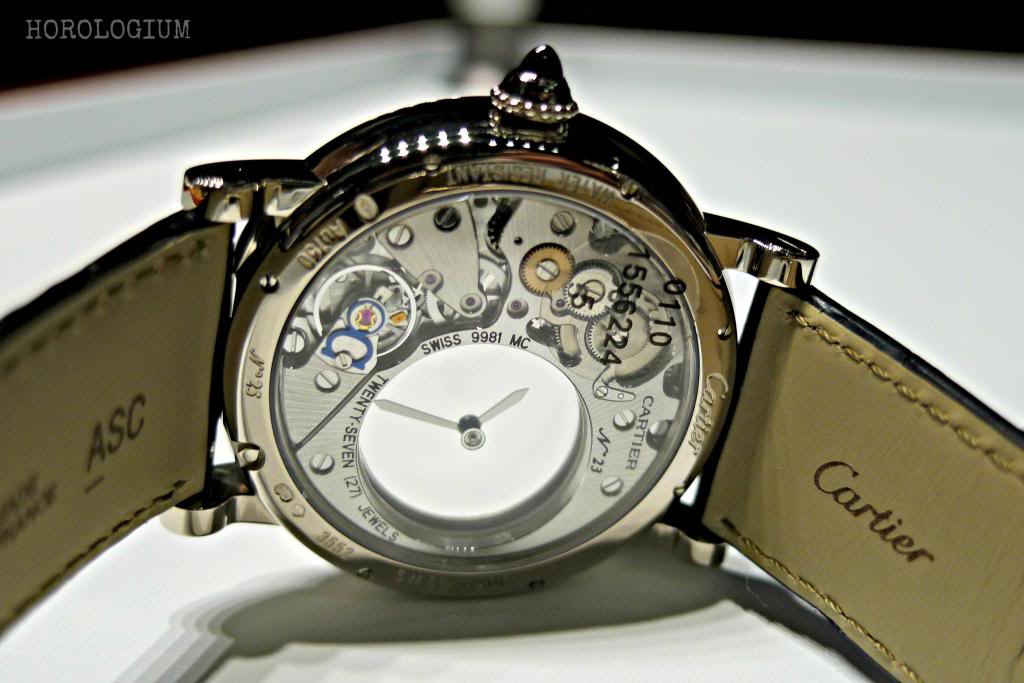 This second piece is called the Rotonde de Cartier Mysterious Double Tourbillon. As the name indicates, this is a flying double-axis tourbillon. It involves the use of a disc of sapphire crystal with an anti-reflective finish containing an aperture the size of the tourbillon. The first rotation is that of the tourbillon, at a rate of one revolution per minute. The disc is the support for the rotating cage, and has a rack around its edge, transforming it into a large gear for the second axis rotation, the tourbillon’s titanium carriage completing a full turn of the transparent space in five minutes. 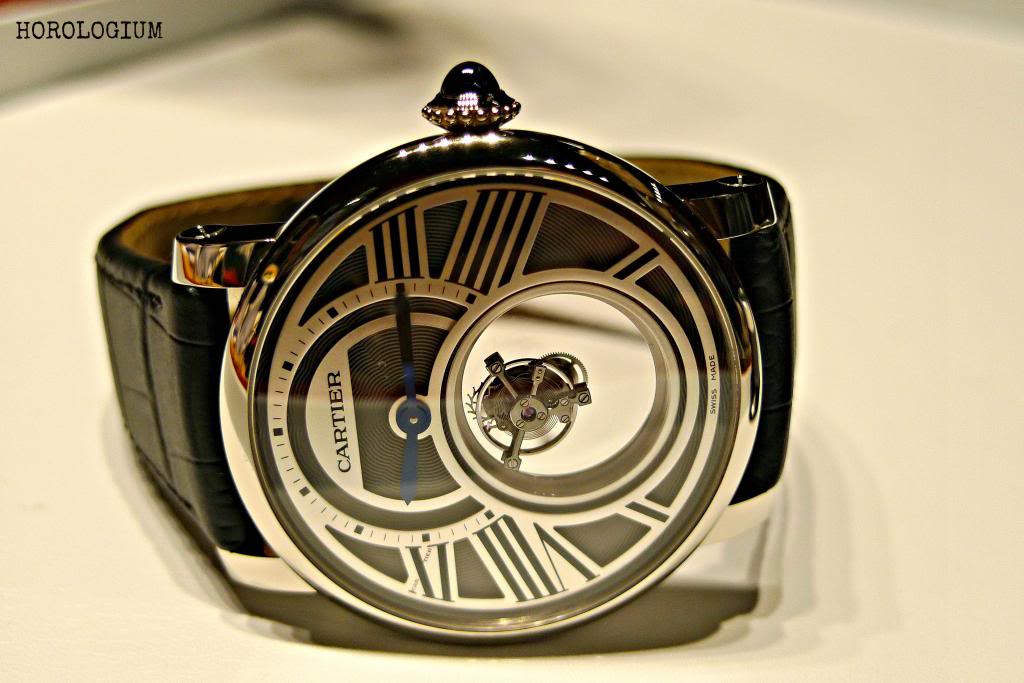 The dial is slate-grey guilloché, silver open-worked with a sunray effect, and with transferred black Roman numerals. The sword-shaped hands are in blued steel. Inside the 45mm platinum case is the new manual wind Cartier calibre 9454 MC with fifty-two hours of power reserve. This is an unlimited production model priced at 120,000 EUR. 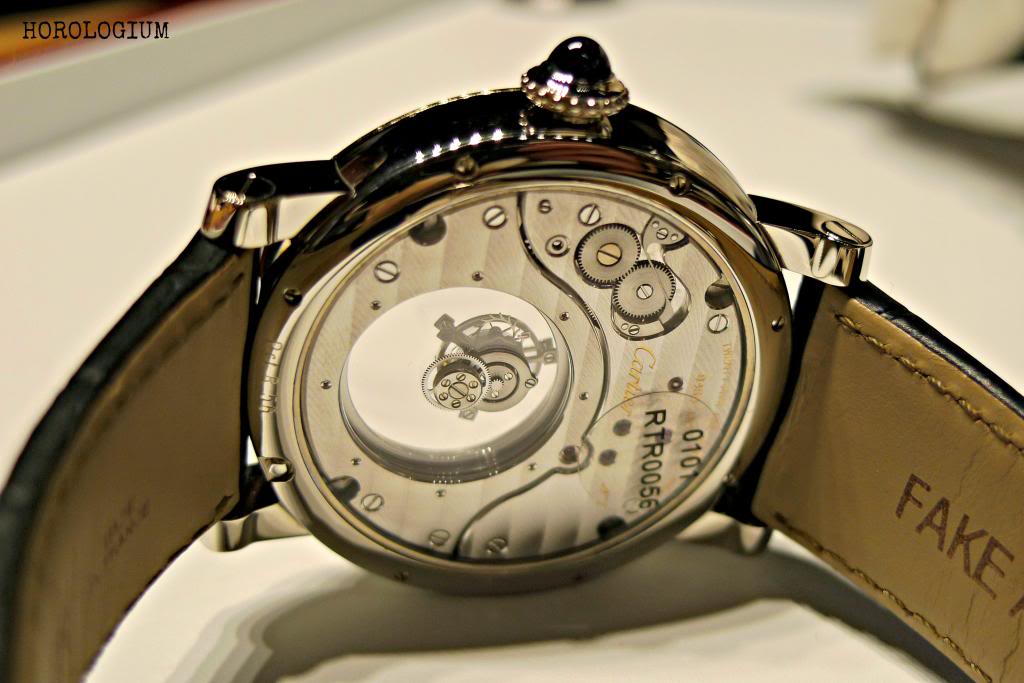 It is difficult not to be drawn in by Cartier’s mystery pieces both for the ‘mystery’, even if we know how it works, and for their simple elegance. In terms of this pair, the touribillon one is the one that I was most captivated by, it’s really quite stunning, but the simpler one is obviously more accessible, starting at 38,500 EUR.

Like Loading...
‹ A look at some ‘jump hour’ watches
PHOTO ESSAY : a pair of Vianney Halter Classics ›