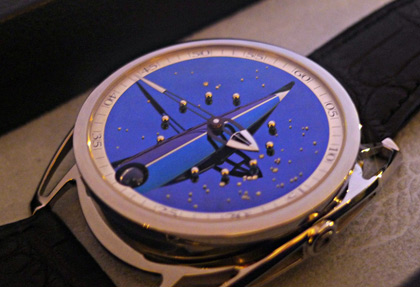 Having had the opportunity to meet David and Alessandro Zanetta of De Bethune when they were in Sydney last year, it was with pleasure that I found myself in their Geneva salon at the Four Seasons Hotel at the end of January. For those who are unfamiliar with it, during SIHH there are also many brands that are exhibiting in various Geneva hotels.

De Bethune’s presence was hard to miss, with a banner and accompanying Mercedes 300 SLR (W196S) parked out at the front of the hotel. The car was the subject of much photographic interest and, I hear, even make an appearance on local tv at one point. David Zanetta is a bit of an auto buff, and this classic sporting car was a long labour of love by David and Alessandro.

The two new pieces which were being shown to visitors were the DB28 Skybridge and the DB16 Tourbillon.

First, to the Skybridge, shown in the first photo above, with its mirror-polished and blued titanium piece of the eponymous name. The very striking arrow-shaped bridge dominates this timepiece, and its colouring, as well as its naming, is intended to represent a “bridge to eternity” across the sky. The flame-blued and mirror-polished steel hands, also in the distinctive De Bethune way, almost visually melds into the large bridge. There is also a discreet spherical moon-phase at six o’clock, and the white gold and diamond constellation on the dial can be personalised for each other. Titanium is also used for the spherical hour markers.

This watch has the famous floating lugs, allowing it to be worn very comfortably, and the use of titanium makes it incredibly light on the wrist. The case is 43mm but the watch in its entirety is 45mm, with a pocket-watch crown placement. 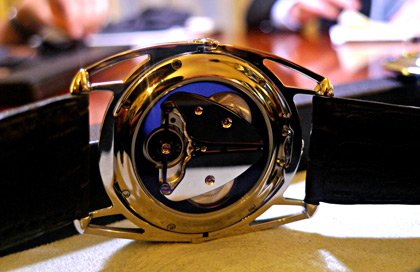 Beneath the stars and moon is the DB2105 hand-wound caliber with a six day power reserve which is visible through the transparent case back. It, too, has handcrafted finishing and decoration with mirror-polished blued steel. The DB28 Skybridge is priced at 98,000 CHF.

The other new offering was the DB16 Tourbillon Regulator, a perpetual calendar with deadbeat seconds. It’s a low key dial for the type of complication that it is, rather than being upfront and centre, the tourbillon and four-day power reserve are on underside. 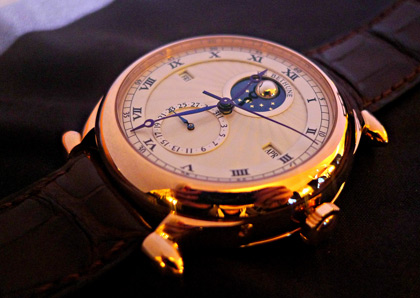 The dial is silver-toned guilloché , showing hours, minutes, and seconds, the date at 9 o’clock, day at 6 o’clock, and month at 3 o’clock. the moon phase indicator comes with a retrograde moon age indicator, a leap year indicator in the sky at 12 o’clock, perpetual calendar with deadbeat seconds (said to be the first time there has been a perpetual calendar deadbeat in a watch) and a 30” silicon and titanium tourbillon. The latter forms part of the hand-wound, Calibre DB2509 inside. 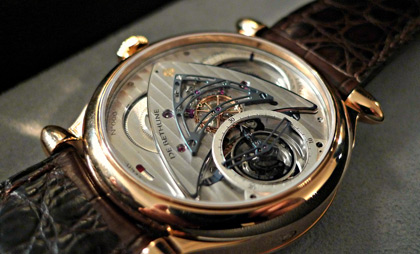